Normally for us Valentines involves a big night out at a pricey restaurant, but this year with the economy being such and a 3-wk old who probably wouldn’t be all that welcomed at an upscale place, we decided to go back to the basics and go out for our favorite – Indian food!

This was Lilli’s first trip to a restaurant, and the first time we’ve even been out at night since she arrived. Our favorite Indian place is usually pretty deserted at night, so it was a perfect place to go to avoid germs (since we’re really not supposed to get out much right now with her) and also to avoid tables of staring people if she had a meltdown. And we decided to go on Friday night to hopefully avoid even more people!

We waited until after her 7 pm feeding for optimal sleepiness, and got her jazzed up in her Valentines day dress. Her dress capped off a week of dressing in Valentines themed clothing & PJs. I had some tights for her but they were actually bigger than her entire body so we went with cute socks instead. And of course the bow had to make a reappearance! 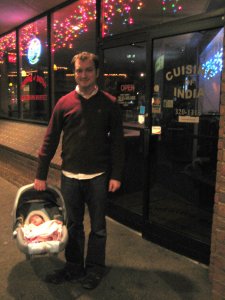 Thankfully Cuisine of India was pretty empty, one big table of Vandy students and one table with another couple.

This is me pretending to feed her some Garlic Naan (bread) which is pretty much as big as she is! She did great on our date night, and slept through the whole thing.

And here are some of Brent’s normal pics – doing his best Lilli impressions!

Have a great week!

1 Response to Big Night Out!