Lilli has survived her first two days in her “big girl” class! In the baby class, she was always the first kid there by about 45 minutes every morning. Brent usually drops her off around 6:45-7, and none of the other kids ever showed up until around 7:30. We always liked that because she got TONS of love from several teachers and they’d always grab her as soon as Brent got buzzed in. Not the same in the Creepers and Crawlers! It seems she’ll be getting there at the same time as Avery every morning. Here’s Lilli & Avery: 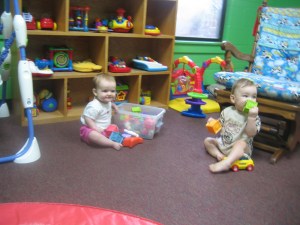 Lilli had been in her new class all of, oh, 5 seconds, and was happily digging through the box and found two perfect blocks to chew on. Avery, a 9 month old, agreed and is now seen chewing on her two blocks. Since he’s a crawler all she could do was stare and smirk! It’s ok, this morning he was pulled up on the chair and she was a little closer so she started grabbing his bum, which of course everyone found very entertaining! I think Lilli and Avery are going to have quite the relationship….. 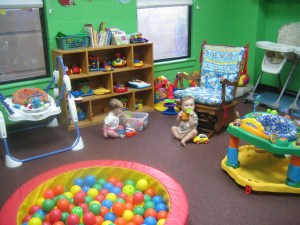 Her new room has lots of fun new, bigger kid toys. Apparently the yellow car is something the boys fight over. And regarding the ball pit, Ms Donna told Brent “you’re not really a part of the class until you’ve fallen out of the ball pit”. Oh dear. But I am preparing for lots of bruises and bumps, she’s pulling up on EVERYTHING. She’s great at the pulling up part, it’s just the balance and hanging on that are sometimes lacking! Tonight she took a head dive into her singalong piano thing. Ouch!

She came home pretty tired last night, you could just tell it had been a different day! She and Jada (the kid who taught her to blow bubbles) are the only two who can’t crawl, and these kiddos are everywhere! It’s one very active room!!! (You move out of this class when you turn 1 and into Ms Barbara’s room – and Lilli is her favorite! Can’t wait until she’s 1!) This morning good old friend Cleo just crawled right across Lilli. Tonight her little knees were all red, I could tell she’s been scooting and working on her crawling all day to keep up with these kiddos! She still mostly goes backwards at this point. I think she had been spit up on or drooled on by one of the other kids because there was some sort of drool patch on her back that she could never have done. Ha! Ms Shannon said this afternoon she’s mostly been hanging with Cleo and Jada, the girls are sticking together! The rest of the class is boys, and she’s already picked up this odd squeal I’ve heard one of them make both yesterday and today while he’s eating. More monkey see, monkey do-ing! And Ms Violet told me this afternoon she’s been her usual smiley self, so she seems to be adjusting well.

And she has slept very well the past two nights! Tonight she literally passed out during her bedtime bottle and didn’t even wake up when I put her down in her crib and in her sleep sack. Poor baby!

That’s all for tonight, I’ll have to post pics from our picnic at the park later this week!