Last night was the monthly story time at the library in our neighborhood. I’m so glad they have a once a month storytime in the evening that we can go to!

Lilli must have known that her old buddy Liam was going to be there because she took some extra care getting ready last night!

She and Liam used to go to daycare together, and now both of them go elsewhere since that place turned awful! She and Liam go way back to the baby room, I remember him when he was just a few weeks old and brand new at the daycare. He came to Lilli’s birthday party, I first really got to chat with his mom at Aaron’s birthday (she’s also a CPA), and the two of them have even had a dinner date at the neighborhood Mexican restaurant (they live really close to us). So, on Thursday I sent Jackie a note and told her about storytime and I really didn’t think they would get to make it since she said she was busy with quarter-end at work, so I was really surprised when we walked in and they were there!

For some reason Lilli got really shy and melted down when we first walked in (which is always lovely in front of a crowd) so I picked up our “Limp Noodle” and when she saw Liam she got so excited! It was so sweet that they remembered each other since it’s been mid-August since they last saw each other. They were both just giggling and bouncing around. I guess old pals never forget!

Of course their reunion probably wasn’t the best for a story time atmosphere! They weren’t awful though. It’s just hard for that age to sit still for any length of time, especially stories that go over their head. Here’s the two of them flirting with each other:

The craft last night was making Jack-O-Lantern faces. She had no interest in making hers and wanted to be the boss of Liam and show him just where he should put everything. 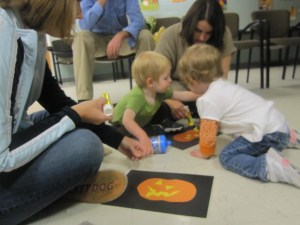 Any time something makes her happy she has to hug it – animated or non-animated objects. Some days in the afternoons she has to hug practically every toy good-bye before we can leave, and she hugs every kiddo and teacher good-bye as well. So while they were doing their craft she’d just lumber over and squeeze his neck until he’d start squealing and then they’d both start dying laughing and do it all over again.

So, it’s safe to say that Lilli and Liam are still big buddies! We just need to get them together in a spot where they can run around a little more freely!