A few more of the Thanksgiving crafts we did this year…

Any project involving glue is a home run…

The finished turkey family – can you guess which one is Lilli’s??

We also did the hand-print turkeys, you trace your hand and then decorate with googly eyes, feathers, etc and then we glued a Popsicle stick on it to make puppets. I had seen a few various variations on it, but came up with that method on my own. This is Lilli’s tracing of my hand. Not bad considering her age!

We forgot to get a close up of her turkey. Lots of feathers and creative licensing. And of course she’s wearing that awful Jasmine dress. 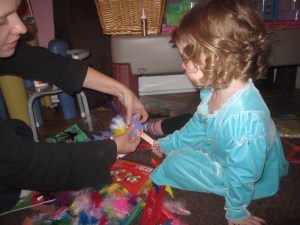 Pippin is not impressed by arts and crafts.

As far as the grocery challenge goes, I didn’t hit my goal this week, I ended up spending $85 pre-tax which is still a huge improvement from where we had been at and just $10 over budget. I did save 18% or just over $19 between my coupons and Kroger plus savings. With it being the end of the month there were a few more coupons expiring that I wanted to use on things we always use. The kicker was $13 for Tide, but it is the best at keeping colors bright.

A few new recipes from over the last week, I did a lot of my menu planning from Plain Chicken this past week.

Chicken Chalupas Casserole was to DIE for. I had some Perdue grilled chicken strips in the fridge I needed to use, so I used that for the chicken in the chalupas. My casserole dish only held half as many chalupas, so I halved the half and half it called for and it turned out perfectly, with enough for our dinner and lunch leftovers. And since all the work is done the night before it was great for a week night meal for us. I’m sure I also snuck in some extra hot sauce because we like it spicy.

Rosemary Ranch Chicken was also delicious. We were out of ranch salad dressing (bizarre) but I did have a new bottle of spicy ranch that we used that turned out just fine. We grilled indoor on the George Foreman due to weather. It was such a pretty piece of chicken that this one would be great to serve when hosting people or taking food to others!

Due to the holidays our other meals were either at relatives’ homes or simple soups and other freezer stuff!