Going back all the way to July 4th now….

The 4th was pretty low key for us. Brent worked on the fence while Lilli and I went over to a friend’s pool and did some swimming. I know, it’s a rough life. That evening our church held it’s annual “Freedom Fest” downtown. One of our members owns a very large, very profitable parking lot a block from the stadium/river. Instead of renting it out on this very popular downtown night, they block it off for our church and two other East Nashville CofCs for a big cookout. We had grilled hot dogs and hamburgers, and every brought chips, desserts, watermelon and beverages. It was so much fun, and there were even a few inflatables for the kiddos.

One member from one of the other churches came dressed as Captain America and handed out bubbles to all the kids. No clue how he stayed in that costume all night on that HOT July 4th!!

Of course Lilli loved jumping in the inflatables with her buddies! (She’s on the right in the pink shirt.) There were two bounce houses, one for the bigger kids and one for the smaller ones. It worked out great and everyone stayed where they should be. One thing I really appreciate about the “bigger” kids is they really do look out for the smaller ones and are so respectful. I think that’s a main difference between a smaller church where they all know each other and a bigger church where no one knows anybody.

Jumping around with her friends. She could jump all day and all night. 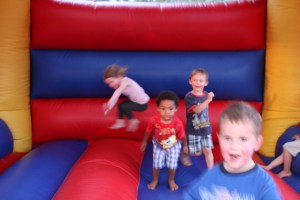 Wendy brought some flags for her kids and had an extra one for Lilli. She and Zach ran all over the parking lot being extra patriotic during the entertainment portion (a Neil Diamond impersonator.)

There was still about an hour to kill between the end of the entertainment for the evening and the incredibly late fireworks start (9:45!). A lot of people with older kids went to stand on the bridge and river for the best view, but we knew that really wouldn’t be a fun wait with Lilli, or queasy me for that matter. So we stuck around the parking lot with a lot of Lilli’s friends and let them play, with each other and the Iphones, and hit the dessert table up a few more times before the fireworks started.

We had a great view without the hassle of the crowd and could relax in our lawn chairs with plenty of personal space. We can also see fireworks from our upstairs since we live so close to downtown, but it was nice to have the full view and enjoy the synchronized symphony music/fireworks production.

The show probably lasted about 15minutes and was really great. We’ve watched before from East Park, but this is the closest we’ve been before. 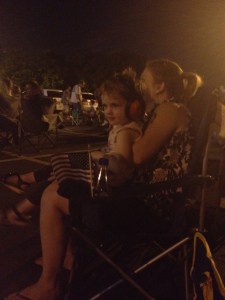 And Lilli actually enjoyed it! We showed her some YouTube videos earlier and she was excited about seeing all the colors, so that made it more fun for her (looking for pink & purple specifically). We also brought along Brent’s “shooting” headphones. She hates loud noises so that offset a lot of the noise and I think “mentally” made her feel better about it. We really weren’t sure she would like it, especially with it being SO much after her bedtime, but thankfully she did and hopefully next year we can go again and the new baby will sleep through the whole thing!