One of the great perks of staying on a Disney property are all the free and fast shuttles to get to all the various parks.  We had gotten a rental car at the airport, but it stayed in the parking lot the entire time we were at Disney (and it was free parking at the resort).  If I weren’t pregnant I probably would have held off on the car until we were ready for the second half of our vacation, but I just felt better knowing we had a car if we needed to get somewhere off-site in a hurry.

Our bus pick-up was right outside the hotel and we only waited a couple of minutes for the one to Animal Kingdom.  It stopped at two other Deluxe resorts and then we were on our way to AK.  Originally when I started planning our trip I had thought we’d want a full day at AK and just a half a day at Hollywood Studios, but the more I read the more I realized there wasn’t a ton Lilli and I could do at AK.  Since it’s newer, the rides are a lot nicer and literally there was only one ride she was tall enough to do.  It actually worked out great to just spend half the day there.

I think the overall theme of our trip could have been “wait five minutes and it will rain on you”.  Florida always has so many pop up showers but it was just crazy – we literally got rained on every single day, probably about 3-4 times each day.  We were STARVING when we got to AK so our first priority was lunch.  Unfortunately, we got there just as a storm was popping up so everyone decided to have some lunch. 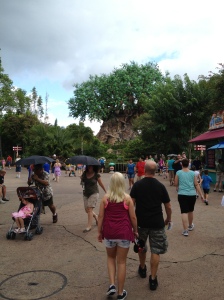 We had gotten the free meal plan deal, so all our meals were covered which was SO nice.  I can’t imagine having to pay for all the food – the fast food lunches were about $30-$40 for the three of us, and the dinners would have been about $100-$125 for us each meal.  Nuts.  By far this was my favorite of the casual lunches – and Disney did a great job with nice sides at all the meals (and every meal came with dessert).  I was also impressed with how healthy the kids meals were.  At no point did Lilli ever even have a french fry (or us either) – all of her meals came with either grapes, apples, carrots or yogurt and everything was baked and pretty healthy.  I love that – I hate that most kids meals are just a bunch of fried junk, especially when you’re on vacation.

Since it was raining at this point we walked around for several minutes before we found a covered spot for us to eat and enjoy our BBQ lunches.  It was SO good and exactly the energy boost we needed to start tackling the park.

The first thing we did was head for the Safari Expeditions.  We had heard they could have a long wait, so if it did we were going to get a Fast Pass.  AK really wasn’t busy at all, and the wait estimate was about 15 minutes so we got in line and were on a Safari Truck relatively quickly.  It was really nice, we’ve been on several things like this before so it wasn’t a completely new experience for us.  They had all the standard African animals represented and they were all nice and close (and completely un-phased by all the trucks coming through.)

We had told Lilli we were going to see all the animals from the Lion King at that park (she was a little disappointed our first adventure was to AK instead of MK where all the princesses are), so when the truck pulled up next to the lion she got VERY excited and squealed out “Is that the REAL Simba?”.  Everyone on the truck completely “awww”ed and of course I told her it was.

Another view from the truck….

After we got off the Safari truck we headed over to get a spot for the live Lion King show.  Just timing all these things to minimize wait time and maximize viewing time was really our toughest thing to manage the entire trip.  We happened to get over there as they were starting to seat people, but we also saw Pocahontas right outside without much of a line.  For some reason Lilli loves that movie so we definitely wanted to take advantage of meeting her.  Since this was her first character meeting of the trip she wasn’t quite sure what to do, but we got her autograph in her Mickey Mouse book and posed for pictures.  She also told Pocahontas she watches her movie all the time (pretty true) and that John Smith is her Prince (true).

This was pretty much the last time she wanted me in the picture – from here on out “she could do it all herself” and we just stood back and watched!

We went from her line straight into the Lion King show.  One of the people doing the seating noticed my Birthday button and ushered us to the very front row! Total perk of the birthday button!! Most of the time I just got a lot of Happy Birthdays and waves, but in this instance I scored us a great seat.
Sometimes I felt WAY too close to the action though!!! 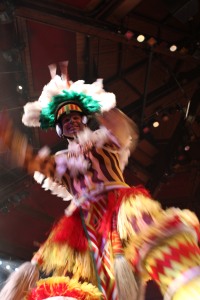 Being so close to the action Lilli got lots of high-fives from the various dancers and could literally see everything.  They put on a fun show of African dancing, high wire tricks, fire eating and pretty much anything you can think of.  The main Lion King characters were on large floats and they were just talking, animated figures. 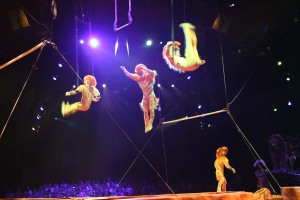 Afterwards we went back outside for more character greetings.  There were a couple of little shelters right there for characters, so we got in Mickey’s line and waited just a couple of minutes to meet him.  She was all about it and no longer needed old Mom to show her what to do.

One of the most frustrating things about characters is how many/often breaks they take.  Someone said because of the heat of the costumes they’ll only stay out for about 15 minutes and then go back for 10 to cool down.  By the time we were done with Mickey and got in Minnie’s line she was heading for a break.  So we decided to skip that and walk around a bit more as our 4:00 am wake up was starting to wear us down.

We went and did the only ride Lilli was big enough for – the flying dinosaurs.

By this point it was already after 4 and AK closes earlier than the others at 5, so we decided to catch the bus back before it got too crowded at park closing.  The only thing we missed getting to do was the live Nemo show, but with trying to get in the other sites we just didn’t have time.  We’ll just have to catch it next time with all the roller coasters!!

This entry was posted in Uncategorized and tagged Animal Kingdom, Disney, Lilli, vacation. Bookmark the permalink.