After we saw the Beauty and the Beast show we split up for a few minutes and Brent went to ride the Star Wars ride while I took Lilli over to watch the afternoon parade.  We got a pretty nice spot, but right in the sunshine with no shade (not that there really was any to begin with).  We were just blazing hot.  She got a few waves and I think a few high fives from characters, but I couldn’t really take pics and play post to keep her from getting run over from other kids, parents, etc.

As soon as Brent got done with his ride he made a bee-line over to the Toy Story Meet n Greet area so we could be one of the first in line after the characters came back after the parade.  All day long there had been an hour long wait to meet Buzz and Woody which just didn’t appeal to us.  That plan worked out great for us and Lilli and I were able to join him after the parade and I think we only ended up waiting about twenty minutes.

They did have lots of really cute photo opps in the waiting line.  This one makes your kiddo look like they’re inside the video game from the Pizza Place in Toy Story. 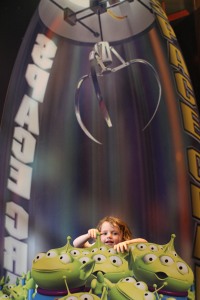 Inside the toy box… 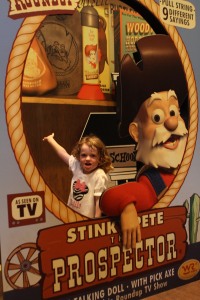 This is a little prop like from a movie set.  There were also a couple of little boys in line behind us about Lilli’s age she was flirting with, so she had a great time waiting in line.

When it was her turn she was all about them – giving them all kinds of hugs and twirling around. 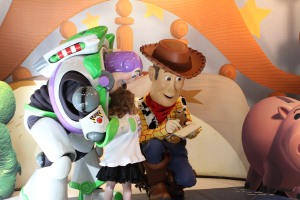 Posed shot with Woody and Buzz….

And Brent and I had one made, too.  She wouldn’t be in our picture, of course. 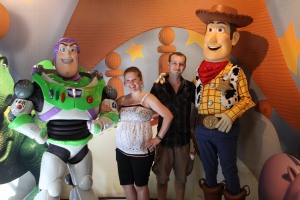 From there we looked for the spot where Monsters Inc characters pose for pictures.  On that day they just had Mike, but Lilli was excited to see him.  One big positive for Hollywood Studios is that most of the characters are a bit off the beaten path and lines are shorter (except for the main attraction Buzz and Woody).

She was all about poking around on Mike.  He was hilarious and did all kinds of crazy poses with people. 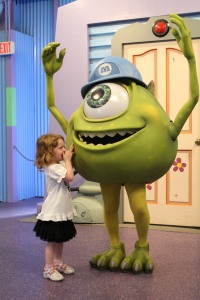 I don’t think there was ever a picture with him where she was just standing normal.  I think she had hit her “weird” spot of tired and crazy for the day. 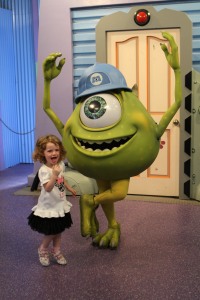 After we met Mike it was finally time for us to go back and ride the Toy Story ride we’d gotten a fast pass for at 9 that morning.  It was really a fun ride where you have 3-D glasses and are shooting at targets the whole time, but it really wasn’t worth an all day wait for (or a 60-90 minute wait if you just stood in line).  I think it’s so popular because it is the only ride smaller kids can ride, all of the other rides had height requirements larger than Lilli.

From there we had done about all we could at Hollywood Studios, and all the afternoon pop up showers were starting.  We quickly went from hot and sweating profusely to drenched and digging out our umbrellas.  We stopped in the gift shop for a minute and then headed back to the hotel bus to get ready for our dinner at Chef Mickeys.  Overall we pretty much agreed Hollywood Studios was our least favorite park.  It really has a lot of shows, but several of them (like the Indiana Jones and other car crash shows) we couldn’t make because they were held at the same time as Ariel, Beauty and the Beast, etc, so it’s really hard to see everything.  And the lack of younger rides just made it less of an appealing park to us.  I think it’s one that we’ve been to once so I doubt we would repeat it if we went again in a few years.

This entry was posted in Disney and tagged Disney, Hollywood Studios, Lilli, vacation. Bookmark the permalink.