Our plan for the Halloween party was to get back over to Magic Kingdom around 6, eat some dinner, and then enjoy the Halloween festivities.  With your Halloween tickets you can actually get back into the park at 4 pm, but none of the special stuff starts until 7 pm.  The Halloween party was one of the things we were most excited about – they only have it a couple of nights a week during October and it’s full of special Halloween only events.  There are two special Halloween parades led by the Headless Horseman (on a real horse), and the evening is full of Villains that never come out any other time.  There’s a special Villains show in front of Cinderella’s castle and then some limited Meet n Greets with them afterwards.  There’s also other characters that only come out during this party – like Snow White and ALL Seven Dwarfs.  That’s a huge deal and we heard the line for that is usually an hour long, so I’m not sure we would have done it but it would’ve been nice to walk by and at least see it from a distance.  There’s also Trick or Treating throughout the park, some of the characters like Mickey and Minnie dress up in Halloween costumes, and there’s special fireworks that evening that are said to be the best ones Disney does.   Tons of fun.

After we rested for a few minutes we got Lilli in her Sleeping Beauty costume and we hopped on the monorail to go back to the Magic Kingdom.  The clouds were pretty ominous on the way over, and it started to rain before we got there so we fished out our panchos and umbrella and just expected a short pop-up shower, like every other day we’d been there.  Lilli is on the left in the pink and I have a dark green pancho.  At least with her bright pink I could easily keep track of her! 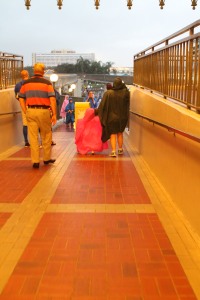 As she and I headed up to get into the park there was a ton of thunder and lightning to do with the massive downpour.  She was absolutely freaking out, I certainly wasn’t thrilled, and Brent had to go through a different line to get our backpack and stroller checked via security.  It was not starting out to be much fun.  And there was a massive backlog of people trying to hide under every awning and walk-through so it was about impossible to get through the entrance.

We assumed after a few minutes the shower would pass.  Until Brent pulled up the radar. 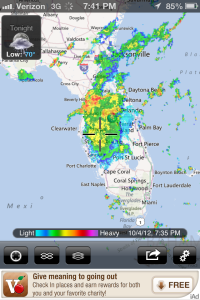 We got Lilli in the stroller and also added the umbrella to her ensemble, but it was one of those instances where it was impossible to stay dry.  We still wanted to eat, but they didn’t keep all the food services areas open for the event, and the ones that were open in the front of the park were already completely full of people trying to stay dry and eat dinner themselves.  So we trudged further back in the park hoping to find fewer crowds and more dry places to eat. 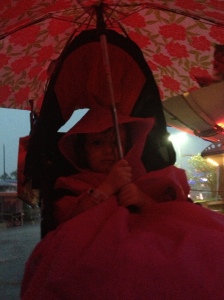 Such a wonderful oasis did not exist.  By only the greatest miracle of miracles did Lilli somehow manage to FALL ASLEEP in the stroller in the middle of all this rain, thunder, and lightning.  We huddled under a mostly dry monorail overpass for probably about an hour and never once did the rain lighten up.  Lilli was still sound asleep but I was starving so I sent Brent out on a mission to see if there were any dry spots to eat around.  He comes pretty prepared so he had Ziploc bags for our Iphones so we could still text back and forth through the bag without them getting wet.  He managed to find one dry spot not too far away that he saved for us.  The tough job was pregnant me getting through the crowds with sleeping Lilli in the stroller – I misunderstood where he was at and managed to get stuck with the stroller and umbrella in a door.  Normally I get a bit of pregnant sympathy from people, but giant panchos don’t really advertise that and I finally got a nice man to help me through the door before I found the obscure little spot Brent had scored next to a friendly British family who claimed to have brought the rain.  Um, thanks. 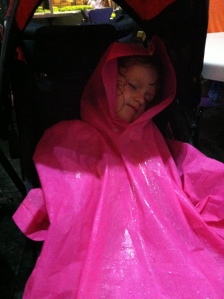 Brent ran into the restaurant and ordered us some dinner.  This is really about the only shot we have that shows Lilli actually was in dress up costume!!! 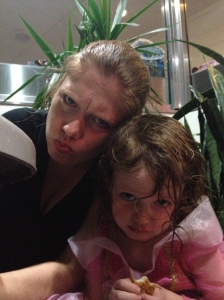 We had plenty of time to pose for lots of sad and goofy pictures.  Brent and Lilli actually had really good attitudes about the whole thing.  I was just incredibly tired and frustrated, and would have just rather been back in the room.  Preferably eating room service. 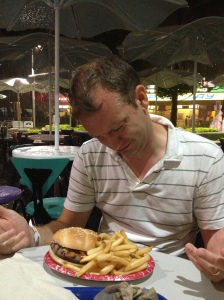 It was still pouring after we ate, so we let Lilli play games on our phones for a while before we decided we just didn’t want to sit under an awning all night long.  The lightning had slacked up a little, so we decided we’d pancho back up and see if any of the events were going on.  The unfortunate thing about this party is that all of the fun and special things require good weather. 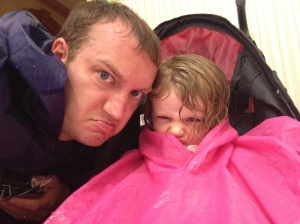 Disney mobilized a few of the trick or treat locations inside, so we went through a few of those lines – poor Lilli had to stick one hand out briefly and I (in the green pancho) had to hold the other side of her trick or treat bag as we went through the lines.  So pitiful.  They did all the kids a ton of candy, I think they felt bad for the horrible debacle the “party” had become.   The rides they open for the party had lines that were at least an hour long, and we had already done of those rides and just adding Halloween decor didn’t justify the wait for us.  They had a few character meetings under some of the covered areas, but those lines stretched long into the downpour and also would have probably taken an hour of standing in the pouring rain to do.  No thanks.  And they came over the loudspeaker and said the parade was canceled – we weren’t surprised because there was no way they were going to put these characters on floats and march them through in the rain, and it was still thundering and lightning some.  The next parade wasn’t schedule until around 11, and there was no way I was going to wait two more hours in the rain in case they did it then. 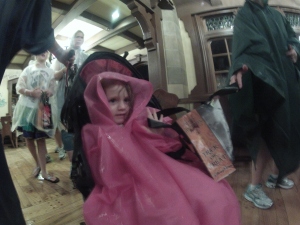 At this point I was ready to call it a loss and head back to the room.  We’d been in the rain for about three hours and hadn’t done anything other than get some candy and eat some fast food.  So we did the proper thing and stopped in the bakery near the exit and bought a bunch of candy and headed back to the room to dry out.  We LITERALLY poured water out of Lilli’s trick or treat bag, and the clothes we wore that night had to be laid out on the balcony to dry along with the stroller! 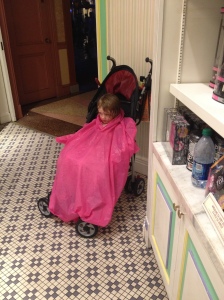 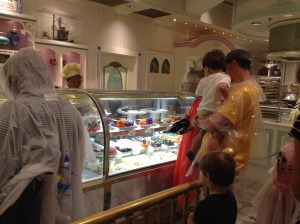 Even the fireworks had to be delayed due to the lightning.  They ended up going off about an hour and a half later than they should have right before we went to bed.  We ended up watching them from the terrace of our hotel, in the rain. 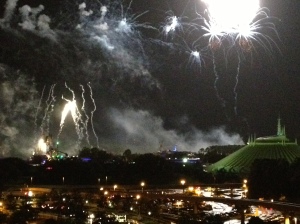 So yeah, I can’t say the Halloween party was the best way for us to end our Disney parks experience.  It wasn’t Disney’s fault, it just stinks when so much depends on having good weather.  The tickets clearly say that there are no refunds, so we didn’t expect to or ask to get our money back.  As we were checking out the following morning the concierge asked if we were there the night before – we laughed and told him about our experience and he said for the first time ever they actually were giving people refunds because it was such an absolute wash-out.  Several of the other parties that year had been delayed, but that was the first one where everything was completely disrupted and there weren’t able to do a parade at all.    We were THRILLED and I dug our completely drenched, falling apart tickets out of our luggage and we happily accepted that $183 refund.

This entry was posted in Disney and tagged Disney, Halloween, Lilli, Micky's Not So Scary Party. Rain, vacation. Bookmark the permalink.