Pics are from November 9th-10th…

That Friday after we went to the zoo we headed out to Nashville West for some shopping errands at Target.  You know she’s your child when she sees the fall hats, puts one on and asks to have her picture made. 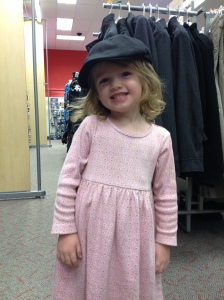 My personal fave, although probably a bit much for Tennessee.

Wizard of Oz is what’s been playing in the car lately, and that’s made her want to wear her witch costume and run around the house with my Halloween decorative broom like the Wicked Witch.  When we were decorating her Christmas tree this week she even picked out a lot of Oz ornaments for it along with a lot of my Disney ones. 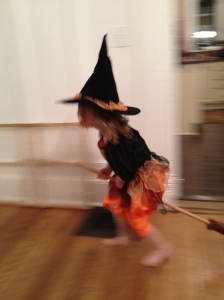 That Saturday morning we headed down to Shelby Park to do some maternity photos as a family.  That was really a lot easier when it was just Brent and I to pose and look at the tripod! I think we got a few good ones but Brent hasn’t photoshopped them yet.  Our big bribe to Lilli was getting to go to the playground afterwards if she behaved.  She kind of behaved, or at least stood still for a few pictures.  So once we got home we headed over to the playground and texted Serif to see if they were out and about to play, too.  Having someone her age to play with was probably just as good a reward as even getting to go. 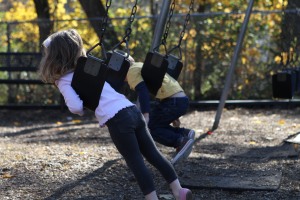 Brent manages to capture pretty much all of our most embarrassing moments on film, whether we like it or not.  He just so happened to be taking pictures of them swinging together when Serif went head over heels in a fairly impressive fall.  Impressive in that he truly managed to fall “just right” to not hurt himself.  However, if this had been Lilli – there would have been massive girl tears anyway.  I’m half surprised she didn’t cry on his behalf! 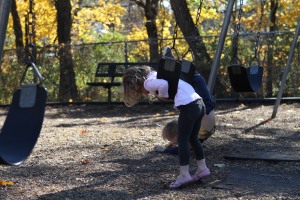 Twinsies…(Brent had his good camera with him following our family pics, hence the obsessive paparazzi style play-date.) 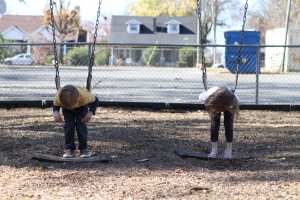 The two-fisting of cookies is all my fault.  When we got back from our pics it wasn’t quite lunch-time yet but I was starved so big old me brought a box of cookies along to share.  Lilli loves cookie-toting momma. 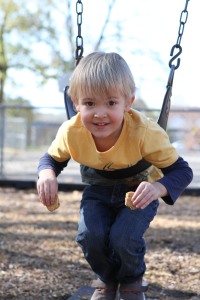 Upside down swinging is definitely not momma-approved.  It does make for cute curly haired girl pics though! 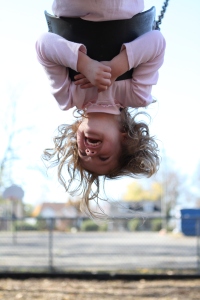 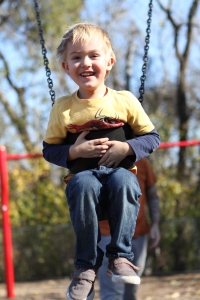 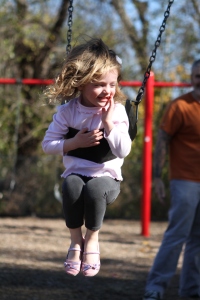 I think this is my fave one out of all of them, I love Serif’s expression with Jeff fuzzy in the background. 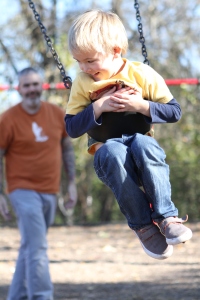 She cracks me up.  She is all lean muscle and just SO stinking petite.  She’s just now at 30.4 pounds, and most of the booster seats I’ve looked at are for 4 year olds and 40 pounds! She’ll be 8 before she’s 40 pounds at this rate!! 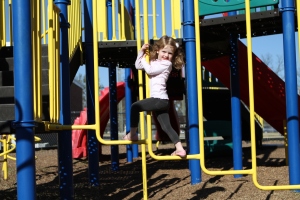 And strong!! This girl can pull up on the low bars like it’s nothing at all.  We’re starting dance in January, but I think she will also really enjoy tumbling at some point too, so we may rotate between classes. 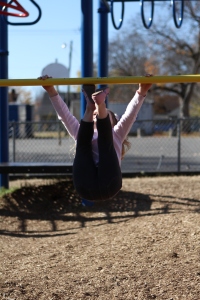 Later that afternoon we decided to take advantage of what could have been one of the last really nice days of the year (temp-wise) and actually washed both our cars.  That might happen once or twice a year.  Lilli was incredibly into it and scrubbed on both cars.  My car wasn’t awful since I go from home garage to work garage and drive a whopping 6 miles a day, but we didn’t even recognize Brent’s car when we got it clean! 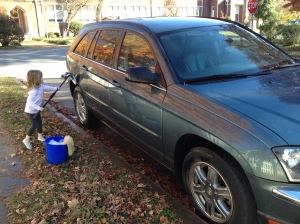 She had so much fun washing our two cars she wanted to wash more cars when we were done! Definitely doesn’t take after us there.  So we let her do her tricycle all by herself.  She soaped, rinsed, scrubbed and even dried it off.  Hilarious. 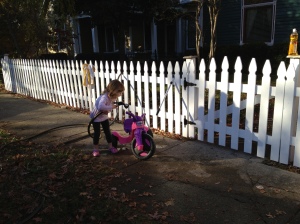 Fun but busy weekend ahead! Tis the season!! The church kids Christmas party is tomorrow night at a bouncy-place, we’ve got a kiddo birthday party tomorrow and then Christmas pics for us and others on Sunday! Fun times!

This entry was posted in Uncategorized and tagged fall, playground, Serif, Target, washing cars, we like hats. Bookmark the permalink.