We drove down to see my family on Thanksgiving Day this year.  Since Brent had to work on that Friday it mixed things up a bit, but ended up making for a less hectic holiday for us which was also pretty nice as I’m getting bigger and slower!

Lilli was really, really excited about turkey.  They’d been talking a lot about Thanksgiving and the Pilgrims and Indian and eating turkey on Thanksgiving so she was pretty relieved to know there would be turkey for her to eat.  However, the big star of the show ended up being the home grown corn on the cob.  I think this is her “Did I really eat 3 of these face?” 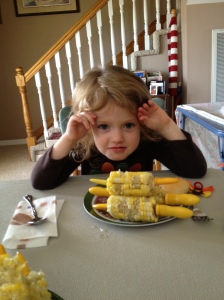 She had a lot of fun playing with cousins Kacey and Cody, especially Kacey this time.  We’ve had such a mild fall/winter that the girls spent a decent amount of time playing outside.

Hope Grandpa doesn’t have some extra dandelions in his garden next year!

The boys did some target practice… 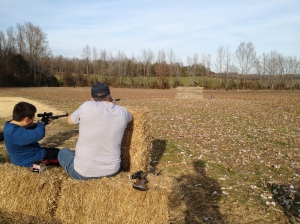 The girls checked on the fish in the pond…That’s typically how Lilli distinguishes between her “two grandmas and two grandpas” – the one with fish in a pond and “the other one” – which is kind of funny because they both have ponds (and presumably both should have fish), but Kacey and Cody have always been big on fishing so that’s just an assumed activity at my parent’s house.

Mom had to force everyone out on the porch for a family picture….Poor Chloe.  You would think having a dog of her own would make other dogs not that exciting to Lilli, but she loves all animals.   And Pippin had a great time playing with his cousin Chloe.

The grandkids had fun playing in, on, under and hanging from the reindeer. 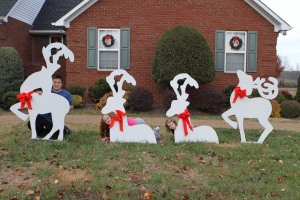 Lilli wanted to be tossed around, and considering she weighs next to nothing it’s not a difficult task.

But then Kacey wanted the same treatment. Ha! Doesn’t look like Grandpa can get quite the same air for long-legged Kacey. 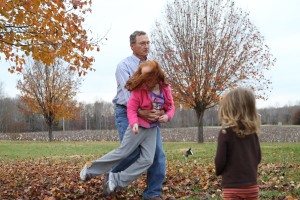 Somehow the girls managed to rake the yard.  Maybe we can convince Lilli to finish our front yard this weekend….

I’m not sure why there is a chain in the tree, maybe it was meant for hanging and swinging.

I think these two share a gene for never being still….probably why they are both so slim!

Grandma even managed to get them out in the cotton field picking some cotton.  I’m not sure she was ever able to get me or Bruce interested in cotton, so finally she found two willing participants.

Cute picture of the ladies in the cotton field – I better see this one in a frame at Mom’s house for all the talk about wanting some good pictures with cotton! 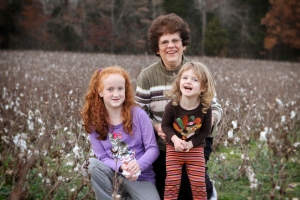 We had a nice Thanksgiving and I know that at least Lilli’s wish for turkey and Mom’s wish for pictures in the cotton field were granted!

This entry was posted in Uncategorized and tagged Lilli, parents, Thanksgiving. Bookmark the permalink.