On that Saturday morning Brent headed outside to sweep off the porch since we were having our families up that day for our Christmas celebration (since I was past the point of being allowed to travel outside Metro Nash).  Squirrels have had a field day on our porch this fall eating nuts.  I have no clue why they’re all about our porch this year, but they make a mess every week.  For whatever reason when Brent went out Buzz was hanging out on the porch.  He’s been coming by periodically but not sticking around, and I refuse to buy any food for a here and there cat.  Lilli is convinced we need two cats in the house and Pippin should be booted out to the yard.  Poor Pippin.  And that’s never going to happen. 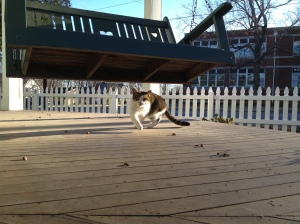 That morning Lilli had her Big Sister class at the hospital.  I’d gone online to look at class times back in October, and that was the first one they were having, which seemed so strange considering how close to Christmas it was.  When we got there the class was being held in a makeshift classroom because they’d had some renovations in the classroom area and they had thought it would be ready before this class, which made a lot more sense as to why it was timed so strangely close to Christmas with no other classes during the fall.  Our instructor was actually the same nurse who had given us the hospital tour just a couple of weeks earlier.  There were only 3 other families in the class, and all the other moms were having boys.

First they showed them an Arthur video about Arthur’s family having a new baby and how it cried all the time and couldn’t play right away, etc.  The instructor was really good at getting all the kids to participate and answer questions, etc.  The class was for 4-8 year olds (I figured Lilli was close enough) and there was one little boy around Lilli’s age and two girls who were probably more like 6-7 years old.  After the video they each got to pick out a baby doll for “practice”.

They practiced all the right ways to hold the baby, changing diapers, burping and even swaddling.

High Fives for a successful diaper change.  She SAYS she’s going to help with pee and poop diapers, but we’ll see how that plays out with a REAL baby.  We set the Pack n Play up in our room this weekend and she’s saying she wants the baby to sleep in her room at first.  HA! I told her babies cry a lot at night and she didn’t seem to mind.  We’ll see about that because I know I certainly seem to mind all the middle of the night feedings and Lilli throws a whole lot more tired tantrums than I do!

When it came time to swaddle she got out in the middle of the floor to wrap her baby up.  We’ve shown her how to do that on dolls and she loves for Brent to swaddle her up with a big quilt so she can see if she can break out of it.

After all the practice and some coloring they got to go on a tour and see the delivery rooms and recovery rooms, and of course the highlight with all the kids was seeing the actual babies in the nursery.  I’m not sure if it was a full moon weekend or what, but they had several babies that had just been delivered and in the nursery, so all the kids loved that.   Lilli was upset that there was only one girl baby in there that day!

Afterwards they all got certificates and Big Brother/Big Sister shirts.  And for some strange reason they all got to take some of the Christmas decorations home with them.  A lot of it was stuff Lilli already knows and does with her baby dolls, but it was nice for her to do it all in a classroom environment and get one last trip in to the hospital before we’re there “for real”.

This entry was posted in Uncategorized and tagged Big Sister, getting ready for baby, Lilli. Bookmark the permalink.