The same day as Lilli’s Big Sister class, both our families came up to celebrate Christmas at our house in Nashville.  Her class got out about 12:30 so everyone swooped in around 1 for a late lunch.  I had made chili the night before and had it warming in the crock pot all morning, along with some salad and homemade bread.  We were STARVING!!

Of course Lilli is always happy to have a friend over to play in her “upstairs” of her bunk beds.

She and Madison had a great time playing together while we got the last few things ready for lunch…..

Of course after we ate it was time for presents!!  Naturally Pippin was right there in the middle of it all….

But once one of his new toys was opened he made a safe and wise exit to enjoy it in our bedroom out of the way.  From the stack of boxes, you can tell we had a very Amazon Christmas.  I only went in a “real” store (Target) once, and ordered everything else from Amazon, Zulily, or Etsy.  At one point, the boxes were stacked about nine feet high in that corner, but by then we had wrapped and given away several things.

Madison and Lilli “modeling” the scarves Brent’s mom made them…. 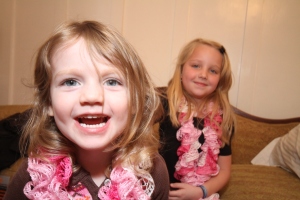 And then the family photo.   Not a good one of me in the whole bunch….I think by that point the busy day had totally worn me down and for some reason I didn’t even manage to get any lipstick on!

After everyone left Lilli had a great time playing with all her new toys, and since then she’s literally played with every last thing she’s gotten! I’m not entirely sure who gave her what, but she has loved it all!

It is back to work/school for us all tomorrow and I’m pretty sure Lilli and I are both ready since we’ve been together non-stop since December 21st.  She was pretty excited to hear that tomorrow she would get to be back with her friends and I don’t blame her a bit – they’re a lot more fun to play with than we are, and the house gets awfully boring to play in so much when the weather is just rainy, gloomy and cold like it’s been since we’ve been off.  We snuck in about 20 minutes at the playground yesterday in-between rain and she got to do some rollerskating on Sunday afternoon when it wasn’t as cold or rainy, but otherwise we’ve been mostly inside the house a lot.

This entry was posted in Uncategorized and tagged Christmas, family, Lilli. Bookmark the permalink.