The old saying about the box being more fun than the contents is always true in this house.  I had ordered all of Lilli’s party supplies from just one source this year, so we got a huge box in the mail (and the box was WAY bigger than what I ordered!) This box got played with to death.  She would have Brent tape her up and literally roll her around, head over tail, all around the upstairs.  Eventually the poor box just collapsed, which was a shame since I had planned to use it to transport all the party supplies to her actual party….

We spent New Year’s Day at Lowe’s.  We had a few house projects we really needed to finish up, like new bathroom closet doors since our old ones didn’t work anymore after we got new carpet in there (they were glass and couldn’t be trimmed shorter like the other doors in our bedroom.)  Yes, I let my child play in a dog igloo.  I was very pregnant and trying to kill time while Brent got quotes on several things.  It’s not like an actual dog had ever been in it….

That Friday evening we went to our church friend Ella’s birthday party.  Last year she had a bowling party, which was a lot of fun as Lilli’s first bowling experience (which reminds me we really need to take her again because I think she’d enjoy it more now!)  This year she had it at an indoor play place attached to a church.  We had been to a party here earlier in the year, and Lilli was just a little unsure of climbing around in it without us.  This time she pretty much ran right in, started bossing her friend Zach around, and before we knew it they were yelling at us from the very top! 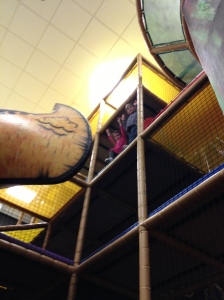 She enjoyed some pizza…..

And they gathered around to watch the birthday girl open some presents. 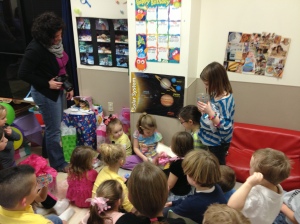 We had a great time celebrating Ella’s 6th birthday! Up next, Lilli’s big 4th birthday bash that took place the following day!

This entry was posted in Uncategorized and tagged birthday parties, Ella, getting the house ready to sell, home improvement, Lilli turns 4. Bookmark the permalink.