Since it’s been nearly two months since her party, it’s probably time I post pictures from Lilli’s 4th Birthday Bash-tacular.

She loved her jumpy party last year at Bounce U and wanted to have another bouncey party this year, but I decided to skip it for another year for a couple of reasons.  A) Bounce U costs about a million dollars B) at 36 weeks preggo I couldn’t exactly bounce and if I’m spending a million dollars I will participate and C) it’s pretty annoying in a 2 hour party to only get 45 minutes to bounce – we don’t open presents at her parties so that gives you a lot of time for kids to just be wild in the party room and I’d prefer they have lots of time to play instead of just running around like crazy Indians.  But maybe next year since she has asked us a million times since then when her bouncey party is.

We decided to have her party at Shipwrecked Playhouse in Brentwood.  We’ve been to several parties there and the kids always have a blast.  It’s basically like a daycare you can rent with all the basic toys that preschoolers love – indoor slide/climby thing, trains, blocks, dress up, kitchen area, ball pit, riding toys, etc.  I also like that you can bring in whatever food you want and the place is all yours for party time so there’s no worries on other kids beating up on your party guests or just general security worries.  We had her party on the 5th of January in the 6-8 pm slot on that Saturday night. 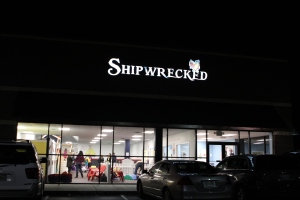 What I didn’t like as a party host is that party slots are only 15 minutes apart.  The party before us was supposed to end at 5:45, but when we walked in at 5:45 they were still eating, had made a HUGE mess and no one was going anywhere.  The little high school girls “in charge” really weren’t being forceful in getting them out of there and the entire situation was annoying.  They were hardly even wrapping up when our guests started arriving at 6, and I think we made more of an influence getting them out by barging in and setting up on top of them than the high school people “working” there did.  It was incredibly poorly run, and I was also annoyed that a manager never even called or emailed after the party to see how we liked it and what our experience was like.  As much as the kids like partying there, I won’t host a party there or recommend other people do.  I missed at least the first 15 minutes of my own party because we were so delayed in getting things set up, and the girls that worked there were basically useless.  Once we finally got everything ready the way we wanted it everything ran fine, but if they aren’t going to get people out on time they need to have a bigger window between parties.

For Lilli’s dress this year I ordered a pretty little princess patchwork dress off Etsy.  The woman did a beautiful job.  It was my first time ordering from her but I’ll definitely be back.  I got so behind with Christmas and having her party early that I ended up being in a crunch having something special made for her – this shop owner worked on it until the wee hours of Christmas Eve and dropped it in the mail to us later that day! She has several gorgeous dresses I plan to get made for Lilli and Abbi for the summer.  And of course Lilli loved her “party dress”.

We didn’t take nearly as many pictures this year – when most of your guests are 4 they are happy to run wild and play and let the parents socialize.  And they’re not nearly as “cute” as little kids, as far as photographic moments! We only invited her daycare class, Sunday school class, and other friends her age.  Since it’s a preschool oriented place we knew the older kids from church would be bored to tears.  I think we ended up with about 15-16 kiddos.

One of Lilli’s best buddies from school Amelia: 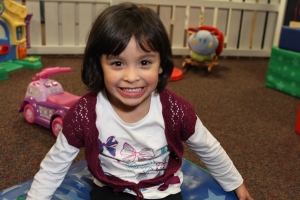 Lilli’s future husband Serif – I doubt it will happen that way but she is very insistent on it and told us today he’s the only boy she likes (after she spent an entire birthday party chasing some older boys and told us in the car afterwards “I only like wild boys”.)  How fun would it be if they did get married though?? We’d have lots of pics for the slideshow!

Brayden and Garrett from school.  Garrett’s dad ended up knowing a couple from church through their work, such a small world! 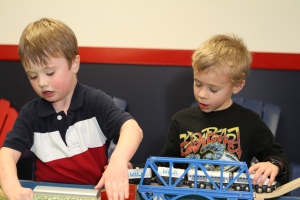 Lilli’s BFF Katherine (from school).  Those girls are two peas in a pod.  Hopefully not too tight of a pod because (according to Lilli) Katherine has the flu this week.

Lilli’s church friend Evan.  He has a new little brother that’s just a couple of months old that will be a buddy for Abbi in the church nursery. 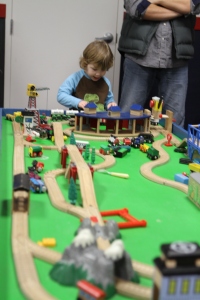 Lilli’s church buddy Charlotte.  She’s got a little brother or sister on the way for this summer to be a nursery buddy for Abbi, too! 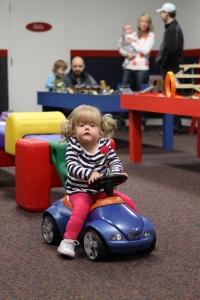 The ball pit – this is where the kids just go crazy.  We went to a birthday party here last weekend for one of Lilli’s buddies and I don’t think she ever got out of the ball pit! 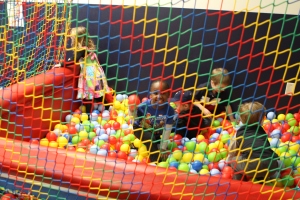 Lilli’s church buddy Zach.  His sister Audrey had the flu and had to miss the party! 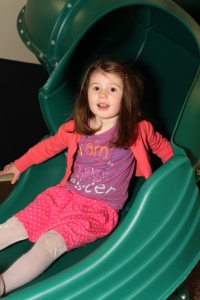 And of course little Miss Ella Kate Roses (really just Ella Kate).  Lilli loved adding the “Roses” to her name so much that’s where Abbi got her middle name from.  We went to Ella Kate’s second birthday party today.  It seems like just the other day she was a newborn we were visiting and taking food to, and last weekend they came to see us (really Abbi) and Ella gave Abbi all her old pacifiers since she’s a big girl now.

My #1 tip to anyone planning a birthday party is to pay someone else to do the food.  We learned that lesson after Lilli’s first birthday.  This year we had Chic Fil A cater her party and they did a fantastic job.  Lilli told us she wanted chicken nuggets and Cheetos so we did just that (along with fruit, apple sauce, etc).  I ordered about 300 nuggets as well as chicken salad sandwiches, wraps, and chicken strips and we literally did not have a SINGLE item of food leftover!! The kids and parents loved it, and kept going back for the leftovers until there was none.  I couldn’t believe it! And sadly I was visiting and entertaining so much I literally only got 3 nuggets and left starving. 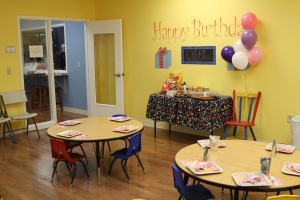 Lilli blowing out her candle…

Some of the party guests: 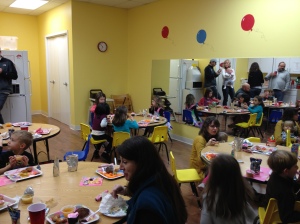 Lilli had a blast at her party, and much like her mom I don’t think she really ate a lot with all the excitement.  So during her tubby that night she asked for a cupcake.  If you can’t eat a cupcake in the tubby on the night on your big party each year then you’re just not getting to have enough fun in life. 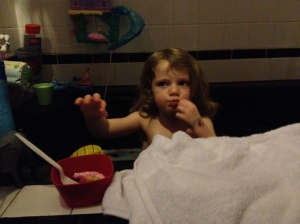 So that was Lilli’s big party for this year.  And she’s already asking when it’s her birthday again…..