Lilli didn’t even realize she had gotten a ton of birthday presents from her party until the next morning when she saw where we had them in the corner from the night before.  She was very excited to open them the following day when we got home from church (and she’d already changed into her Barbie Bride dress up costume, her current fave).    She loved every single present she got – lots of Disney things as well as lots of art centered stuff for us to do together and a lot of other fun things.

She said her two favorite things were this light up fairy (a friend of Tinkerbell’s, I believe) from Ella Kate….. 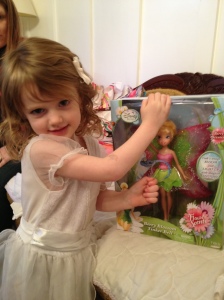 and this Tinkerbell hoodie from Serif.  She absolutely lived in this every day for about two solid weeks – pretty much always with nothing underneath except her undies.  It made for some awkward moments when people visited unexpectedly.  A few times she even wore it out on top of her clothes….

Lilli also started ballet that week.  We wanted to get her started in an activity so when Abbi arrived she had some things just her own.  And she loves to dance and prance around, so we knew that either gymnastics or ballet would be a great fit for her.  This session we’re doing ballet but we may switch to gymnastics this summer because she loves to tumble and I think it might be a better fit for her energy level than something a bit more focused like ballet.  She was shy about it at first, but very quickly warmed up and had a huge smile on her face the whole time.  (She’s the second girl from the right hand side).

Santa had brought her a ballet bag and some tutus for Christmas, and she just loved twirling in the mirrors – often when that was not the instruction.  (She’s the one with arms up and on her tip toes when no one else is doing that….or had been doing that.  She just loved doing her own ballet moves and watching herself in the mirror, but most of the time she did follow instructions.)

Even if we did stick with ballet we would go elsewhere after this session.  I stayed to watch the first two classes I took her to (before Abbi) and a couple of other parents did as well.  No one was distracting, but they sent out an email saying they’d prefer we not stay to watch.  That would be fine but the class is only thirty minutes, and there’s really nowhere you can get in and out in less than thirty minutes.  It’s a one room place, so basically you just walk in and are on the dance floor – so there’s no waiting area for parents.  It’s incredibly inconvenient and I also don’t like being told I can’t watch my child and see what she’s learning or if she enjoys it – she’s already at the age when I ask her what she did she tells me she doesn’t know, so I have no clue what to work on and practice with her now, and there’s no communication from the teacher (who is not especially friendly).  Lately she also doesn’t want to go or do anything, so she always says she doesn’t want to go to ballet and I can’t tell if it’s just part of her not wanting to be separate from me (and Abbi) or if she genuinely doesn’t like it (although the smile on her face and her running around when I go in does tell me she enjoys it).  Anyway, it’s just not the studio for us but it’s been a good experience in starting extra curricular activities for her and from the small amounts of class we’ve been privy to seeing I can tell she has great balance and movements for something like this.  Her class ends in early May and from there we’ll figure out what her next activity should be.

At school they’ve been doing their session on Music and learning all about musical instruments.  The pink guitar was a huge hit for everyone.  They got to go on a field trip last week to the Symphony and hear a concert for kids, and she loved that! She’s been making all kinds of instrument sound and really learned a lot.

That week I had my final doctor’s visit before Abbi’s delivery.    I did not realize how big my cankles were!!! My goodness! My blood pressure was a bit elevated that visit and I can tell why!

Later that night at home, Brent let Lilli play with some real instruments!   I thought this was a cool, artsy shot.

We’ve had a great weekend from time spent at the park, to birthday parties with friends and Abbi’s first trip to church.  Can’t wait until next weekend when we can do more fun things together!

This entry was posted in Uncategorized and tagged Ballet, birthday parties, getting ready for baby, Lilli, Lilli turns 4, Music. Bookmark the permalink.