From back in February 2-4

We did Abbi’s little two week sticker pictures…at some point I plan to piece them all together so you can see the growth from week to week and then month to month.  Just the first month had weekly stickers, and from there on out they’re monthly. 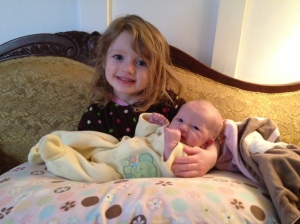 We actually had a bit of snow that morning, and this ended up being our biggest snow of the entire winter (pitiful).  So that made it cause enough to suit up in snowsuit, snow boots and gloves and get out in it!

It didn’t take long to pretty much exhaust the small amount of snow on the deck, so Brent took her over to the school and playground to see what they could scrape up.  Being the first to slide down and knock the snow off the slides made suiting up in her snowsuit worthwhile!!  Every year I make sure I get her one (cheap) snowsuit at consignment sales just in case.

A little tougher on the low bar in all those heavy snow clothes!

The rest of the day we were lazy and played Wii and hung around the house.  Lilli is getting really good at playing a variety of games on it now, so that’s a lot of fun and something new to do together.

On Sunday Brent took Lilli to church while Abbi and I hung at home.  Of course as soon as she got home she was all about her sister….

We were all tired that afternoon and we ended up huddling upstairs and making a nice and cozy little mat of blankets to take a “family nap”.  We should have known something was wrong when Lilli was ok with it and told us she was tired.  When she woke up her cheeks were rosy and I took her temp – nearly 102.  Ugh.  And ironically Brent had captured this picture of how close she was napping to her sister, and you can see how rosy she was.

She had no other signs of being sick other than a little cold she had had (which I caught), and her fever was very short lived.  Unfortunately I caught the cold and then Abbi caught it the next day.  She was so pitiful, but thankfully never got a fever and was mostly just stuffy.  We did lots of steam showers and nasal saline drops, kept her inclined, and just did what we could to keep her nose cleared.

We kept Lilli home from school the next day just in case her fever returned, and she spent most of the morning playing princesses (as usual).  Here they are all lined up to marry Prince Eric.  I guess Prince Eric is from Utah….

We did go out to the new house later that day to sign the Early Occupancy agreement and get keys.  We officially were caretakers of two houses, woo hoo!! 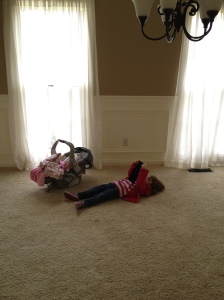