If you ask Lilli where she wants to eat you’ll get two answers right now: Taco Bell or Wendy’s.  Both of those places are pretty okay with us for variety, but they’re going to really know us at Wendy’s soon.  They really do have her favorite chicken nuggets and she eats really well there, so she’s right in picking it fairly often….she even asked to do that as one of her “special days” with me recently where she gets to pick what we do.

That night we also went to her favorite place to shop – Target.  She also frequently asks when we can go there.

So weird that she’s starting to have “crushes” on Disney channel tweens.  Hopefully it will be a long time before she knows anything about Justin Bieber.

These pictures were right in the middle of consignment season and I’d found her several gymnastic leotards at some of the sales I went to.  She has been so excited about all of them and wearing them all the time! We plan to start gymnastics in another month or so when we’re done with swim lessons.  One activity at a time is all we plan to handle…. 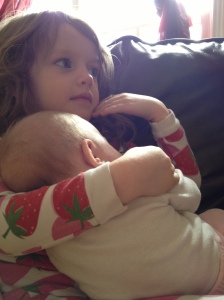 During the month of March on the weekends (and week nights) there was a lot of this…..us waving good-bye as Brent headed back over to the “old house” to meet with handymen, fix things himself, move/pack things, etc.  Totally stank.  At least the weather was pretty junky this spring and we didn’t miss out on lots of pretty picnic days or anything.

We’ve bought several fun outdoor things to play with this summer and keep us moving/exercising.  One of them was this jump rope – she had mentioned they had jump ropes at school and she wasn’t very good at it, but from talking to her teacher they lay ropes flat and sort of jump over them, then raise them up kind of limbo-ish for them to jump over since jump ropes with a bunch of 4-yr olds would be pretty dangerous! Regardless, we had a lot of fun helping her practice some and got some pretty good exercise ourselves.  Turns out Brent still has some mad jump rope skills and even showed us a few little tricks he can still do. HA! 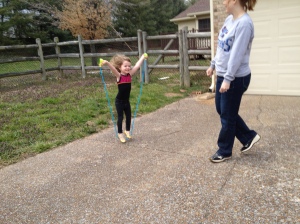 We also bought a real Frisbee (we’ve had a few junky toy ones) and we’ve had a lot of fun with that, too.  And considering she throws it all over the place that’s good exercise for us all.  We are definitely looking forward to a fun summer of playing outside and enjoying the large driveway/yard we have now – between the basketball goal we wrote into the contract on the house, the toys we already have and the little soccer goal I ordered for her that came in today this summer we’re going to be on the move and burning calories – just what I need to be doing!