At eight weeks old Abbi was modeling one of her St Patty Day outfits…..Here’s Lilli wearing it first.  Definitely some similarities but they are certainly different, too!

That Friday afternoon was such a nice and pleasant day (finally!) that when I picked up Lilli from school all TV was banned and her only option was to play outside (after such a long, cold winter it’s been a battle forcing her back out sometimes….)  We spread out our picnic blanket in the grass and she rode all her little vehicles up and down the driveway while Abbi and I enjoyed the sunny lawn.

Her hair had gotten so long!! We have since had it trimmed and shortened up, it was an out of control mess!

There were still several things to repair at the old house, and quite a few things to pack up, that after dinner Brent went and spent the night at the old house while us girls had a slumber party.  That way he could work late/early and they really wouldn’t even “miss” him and he could knock some things out.  Lilli had been dying for a slumber party so I taught her to play Uno and let her sleep in the bed with me.  She loved it and we had a good little time.

The next morning we made a St Patty craft out of Fruit Loops.

We hid some Easter eggs around the yard and found them…

Lilli changed dresses about fifteen times that day, trying on all the different things I had bought at sales recently.  She declared this one below her favorite, and also that she was going to get married in it.  She also decided we needed to ride her scooter up and down the street, stopping at each driveway to read from her Bible.  Unfortunately most of the stories she “read” sounded a lot more Disney and involved various princesses than anything Biblical.

When Brent got home that afternoon he let her drive the car up the driveway (in his lap).  She loves to pretend to drive from the backseat, so anytime we’re outside and he drives up she gets to “park” the car now.

A sneak peak into 12 years from now…. 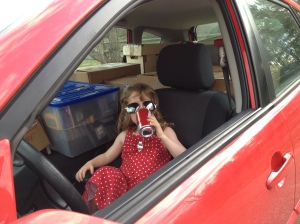 Looking back at all these old pictures I am SO glad we are all moved and only responsible for one house now, whew!! Now if we can ever finish unpacking and getting everything straightened up and hung up!