The last few pictures from our great Memorial Day weekend….

That Sunday for lunch we grilled out some carne asada steak.  It was sooo good. We’ve been grilling a lot lately and I think Brent is very happy with his birthday present! I don’t have a clue how I’m going to top the past two years.

That afternoon during nap time (I absolutely love that most of the time we can overlap their afternoon naps now) we were both working outside in the yard.  I was cleaning up a lot of the outdoor toys and other random things that had been dumped in the backyard when we moved in while Brent was working in the garage to finish unpacking and organizing it.  I took a few things I had cleaned in to him that belonged in the attic (and never should have been dumped outside) and happened to leave the gate open while we talked for maybe 5 minutes.  When I walked back in I glanced around for Pippin but didn’t see him, but really didn’t think he would have walked right past us without coming in the garage, and he’s just not the type of dog who wants to run away from home or spend any time trying to escape, if anything he just wants more time with us.  We walked all around the yard calling for him but couldn’t find him at all.  We really thought he had gotten out through part of our back fence – it had fallen in a storm when a tree came down on it, but when we checked that afternoon it had really fallen more.  So Brent trudged off into the woods as we got more and more worried about him.

Pippin will be 10 in August and we’ve never once had him go missing, so this was pretty scary for us.  We just have a patch of woods between us and I-65, and I had a horrible vision of him somehow managing to make it over there and getting struck by traffic.  After all we’ve been through with him I didn’t want it to go out that way! However, the whole time it just seemed very unlikely that our extremely house-ified city dog would really be walking through all this thick brush.  I was staying close to home since the girls were asleep, but periodically I’d walk around the house calling for him, and I was also watching our street in case he came out in someone else’s yard.  I walked to the end of our driveway and was just looking all around when I saw him across the street rolling around in something.  I called for him and he totally ignored me, so I headed over and he was eating some bird’s eggs that had fallen to the ground.   He really had just walked right past us.  I’d been around the house several times, so I’m not sure if he was over there the whole time and I never saw him or if he had journeyed up the street more than that and was heading back.  Either way we were glad to find the old pup, although Brent wasn’t thrilled with all the scratches and ticks he picked up in the woods.

One of the things I cleaned that afternoon was our tree swing so we got that up in the front yard and Lilli was thrilled!

I tried to find a link to when we first got it for her, but there’s way too many “swing” references on here.  I believe she was right around the age Abbi is now, and I’ll say we’ve gotten our money’s worth out of it!  It’s been a lot of fun having that in the yard now as something fun we can do after dinner on these nice evenings. 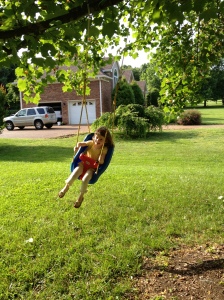 Brent taught me how to drive the riding mower on Memorial Day.  It was definitely nerve wracking until I got the hang of it, and I still don’t think I should be trusted around some of the turns, but it was a lot of fun to learn how to drive it.

Little sis did get to try out the swing (somehow her “turns” are much shorter….) but I don’t think she quite loves it like big sis does, yet. 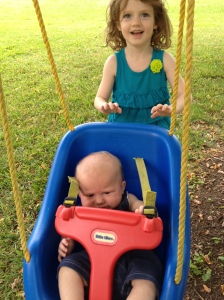 After lunch we headed to the outdoor pool at the Y to kick off summer.  Most Memorial Days we head to the outdoor pool, and this year we thought we’d try the one where Lilli has been taking lessons.  Let’s just say it has a great indoor pool but the outdoor kiddie pool is SMALL and there’s not many seats at all, anywhere.  The deck is very small and chairs are pretty much layered five deep, so it was not a relaxing experience.  The kiddie pool is very basic and not nearly as fun as Maryland Farms.  Abbi was SCREAMING for a bottle when we got there, so Lilli and I hit the kiddie pool – which thanks to this cold summer we’ve had was totally freezing.  By the time Abbi had finished eating we were pretty chilled, and Abbi was very angry about the cold water on her toes.

So we headed to the indoor pool – which really wasn’t all that crowded.  Lilli showed off her great swim skills and we dove for Ariel over and over.  She’s made great progress in her 9 weeks of class – she can swim underwater unassisted for the length of a breath and I think by the end of the summer she’ll be right where she should be for her age. 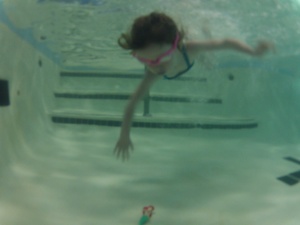 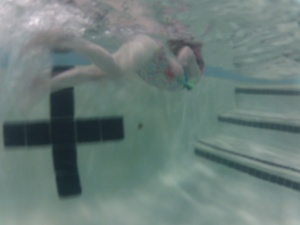 Abbi was also much happier in the indoor pool! She loves baths and water, so she just chilled out and enjoyed moving her feet around in it. 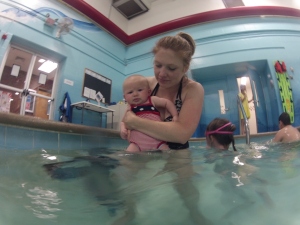 She thought it was hilarious when big sis would come up from being underwater.

All that swimming wore them both out.  Lilli ended up falling asleep in her cozy reading corner (on the left).

Our other big tradition for Memorial Day is RIBS!!   I think we’ve made them just about every year since the year Lilli was born.  The weekend was so perfect we ate just about every meal out in our sunroom.  We love our sunroom (especially now that it’s unpacked!) and spend a lot of time eating and playing out there – Brent’s got some of his instruments out there and Lilli has brought some of hers, so they’ll just sit out there after dinner and make up some tunes.

You bake them for most of the time and then toss them on the grill for the last few minutes.  Delicious!!! After dinner we rounded out the weekend with some smores over our firepit.  We had such a great long weekend and can’t wait for the next one.