It’s been a busy couple of weeks around here, thankfully the germs seem to have moved on from our house and we’ve been able to enjoy summer around town.  Brent and I have been doing a TON of canning in the evenings and consignment season has also started meaning I’m getting lots of little girl winter clothes ready to sell (and getting to go to pre-sales!) All fun stuff, just not much computer time around here lately.

On one of the nice, mild evenings we had we enjoyed a full evening outdoors after dinner.  We had been tossing our nice picnic blanket outside and playing with our toys out there and enjoying the crazy July we had.  When loading back up to come indoors Lilli had to get all the stuff she had drug outside – which meant being inventive with how to carry it all! Why not stuff your bug net down your dress?

One afternoon her school had the puppet-eers from the Nashville Public Library perform a show in the atrium.  One of the classes (the 3 yr olds) had been studying puppets, and since the head of the Children’s area of the main Downtown Library just happens to have a kiddo in that room, she was able to arrange the performance for all the older kids.  Abbi’s room is just off to the left-hand side, so I was able to see her sitting in her teacher’s lap watching through the window as well.

I don’t really remember what the show was about, I had caught Lilli’s cold and felt pretty rotten the early part of that week.  It was well done and they had really nice puppets.  The kids enjoyed it and had plenty of bizarre and hilarious questions for the puppet-eers afterwards.   They showed the kids how this type of puppet was controlled from the sticks afterwards, and shared some general puppet “knowledge” with them.  I love all the fun opportunities the girls get at school! This past week Lilli’s class had a “bug professor” from Belmont University come and speak to their room.  They’ve been studying insects for a while, and he brought in some live caterpillars, live termites for each child to play with, and then some dead bugs/butterflies as well.  They loved it!! 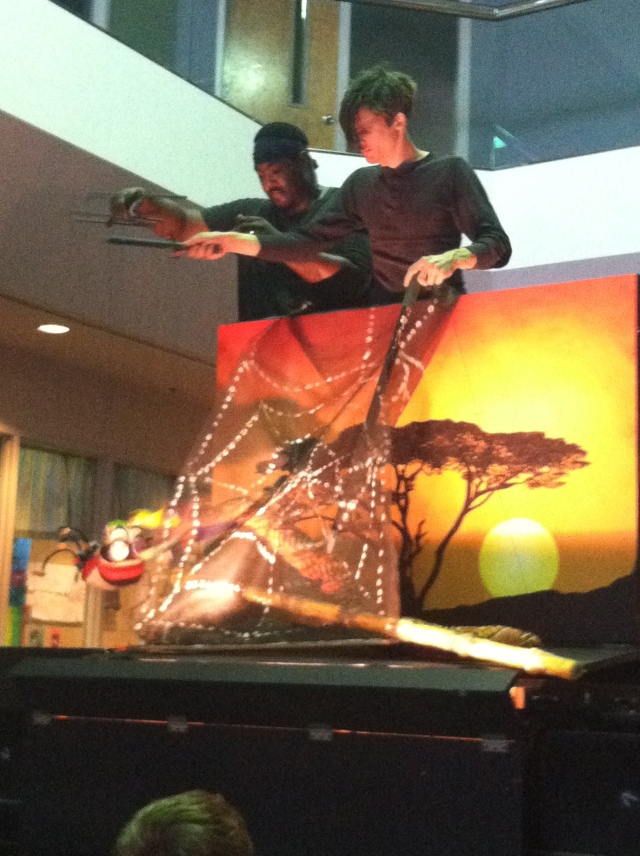 Our new Victorio Food Strainer arrived and Brent couldn’t wait to try it out with our tomatoes.   Man, this thing makes it SO much easier to can tomatoes!! He was able to process a ton of tomatoes we had from the garden in no time.  And, we didn’t have nearly as much waste.  We also got an accessory pack with a berry screen and a salsa screen.  We’ve already used the berry screen on some blackberries we got, and it’s amazing as well.  I highly recommend it – it has saved us HOURS in canning stuff! The gunk comes out the left shoot (he usually runs it through one more time) and the good stuff comes down the white piece into a bowl.  All we have to do is wash and cut the top off, slice them in half or quarters, and the machines gets the skin and seeds off.  Awesome!!

After all the sickies and yuck that we had in July, we decided to get rid of that month by having a fun night OUT.  It seemed like we had been cooped up so much, and even though we absolutely love this house and neighborhood, we needed to get out! So, fun these days typically involves Chuck E Cheese.  Lilli was pretty excited about the surprise! And, it helped make up for missing out the previous week when they had both gotten sick and we had to cancel plans with friends for there.

She’s getting a little better at Skee Ball.  They at least mostly stay in her lane now.

She just enjoyed looking at all the action going on at The Cheese. 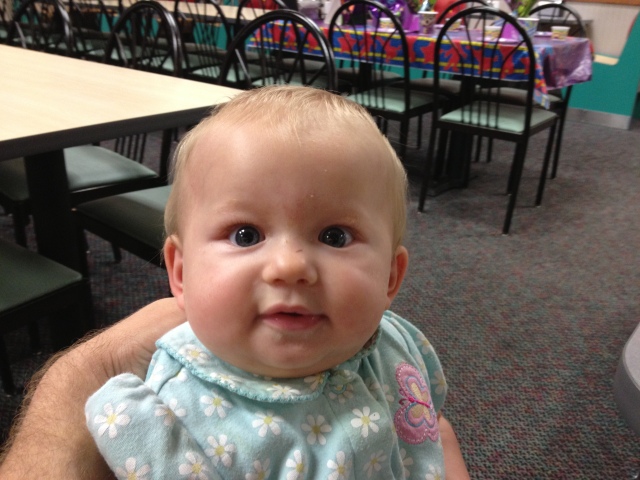 Her favorite game is the large Operation game that she is pretty terrible at.  She always uses her last token on it (as well as several throughout the night) and it’s so sad when she doesn’t get anything for it.  Brent helped “guide” her to actually winning some tickets and she was thrilled! 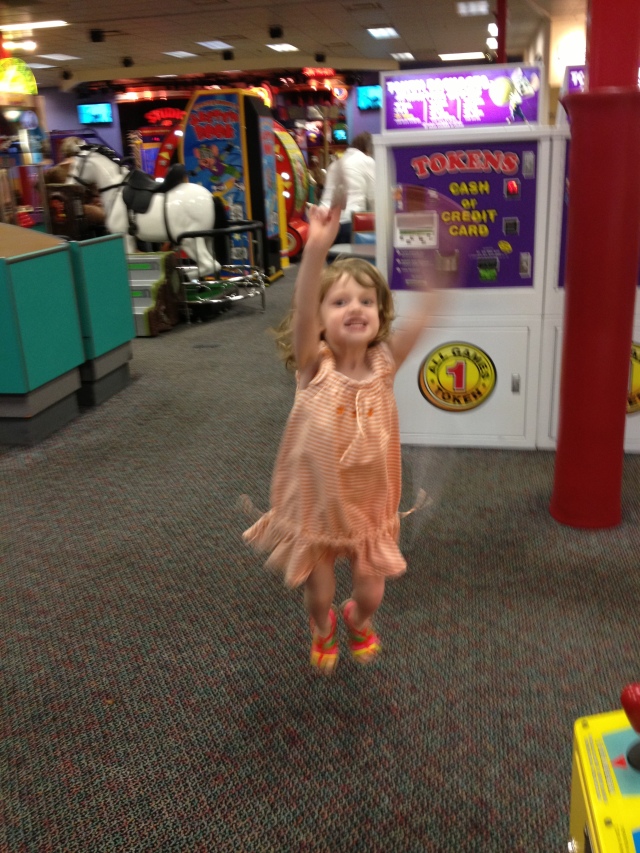 I took her and Abbi to a consignment sale on our way home one afternoon.  I knew it would be super small, and it was just a couple miles from our house, so I decided to tough it out with them so Brent could get dinner ready while we shopped.  Lilli was pretty impatient the whole half an hour we were there, and Abbi mostly napped in the stroller.  Our plan was foiled when the cleaning people locked the garage-house door and left Brent locked out of the house.  So, instead of cooking dinner I grabbed us some Chic Fil A on our way home and he mowed the yard while he was locked out of the actual house.  Not a bad deal.

While the sale was small, I found a few little things and Lilli spotted a Wonder Woman dress up costume.  She was hooked.  Brent told her it made her run really fast and he showed her this picture – she loved it!

We showed her the Wonder Woman show on YouTube and she loved it.  I’m hoping this Halloween season I can find her some gold boots to just make the outfit!

She also discovered she is “bigger to pick up the kittens”.  Poor kittens.  Now they get picked up and moved over a couple of feet about three thousand times per day.  They don’t run from her or try and scratch her, so I guess they figure it’s worth the price of admission to live here.  With Dale… 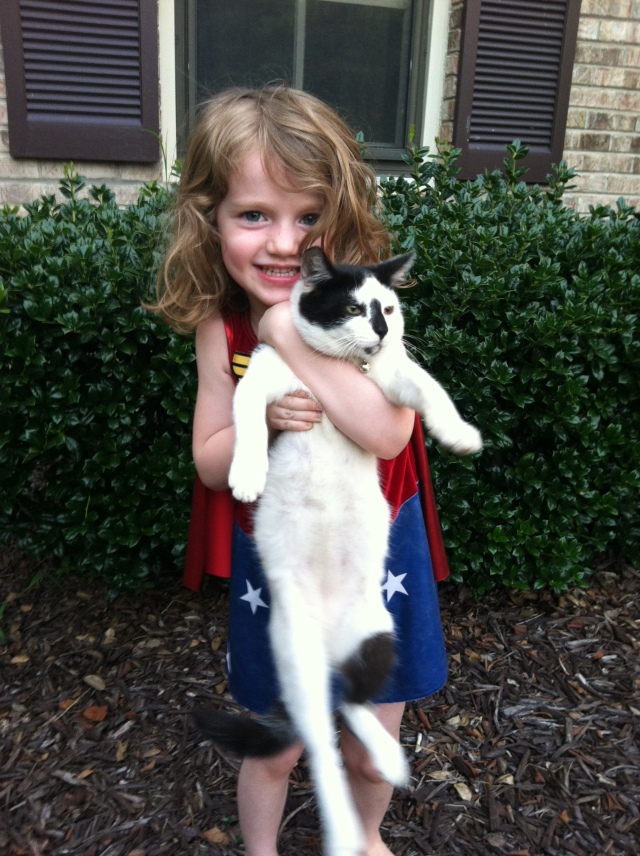 And poor Chip.  He looks thrilled. 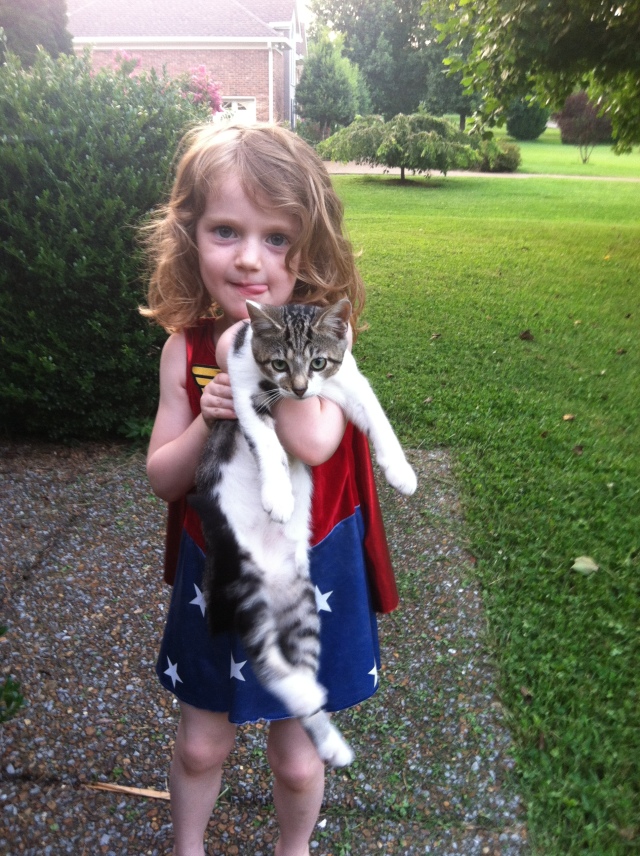