Beauty and the Beast

During our monthly division meeting at work, Women’s Ministry leader/speaker/writer extraordinaire Priscilla Shirer spoke to us about her new book and gave a lesson to us from Ephesians.  She’s absolutely one of my favorites – she’s got 3 kids so she’s totally relate-able to me so I definitely jumped in line to grab a picture with her during our break!

Lilli has been in love with the block building area at school lately and wants me to take a picture of her creations at least a few times a week so she can re-do it the next day.  She is so organized with all of her toys – everything has a particular line and order from cars to Barbies to books and even her shoes lately.  (She’s also been really open to wearing jeans lately! If she wears them she wants us all to wear them that day, so we happily oblige and even dress little sis in jeans!)

That Friday evening we told Lilli about her big surprise – we had tickets just for the 3 of us to go and see Beauty and Beast the Broadway Musical at TPAC the following afternoon.  I wrapped the tickets in a box with a brand new Belle gown from The Disney Store and even bought her a pair of the matching Belle shoes.  I figured as much as she enjoys dressing up and with a little sister coming along behind her – this dress will get worn!  She was so excited about everything – and possibly MOST excited about little sister not getting to go.  A lot of taunting took place the rest of the evening…..and of course she had to try her dress on right then.

I wanted to fix her hair just like Belle’s but the most she would do is let me put it in a princess bun.  I think picture day coming up in a couple of weeks (at school) is going to go great….

The shoes were a little big so I tried to get to wear some dress socks with them but since she is Miss Independent she went with these awful things! Really completes the look, huh? Since it was a long dress she had to pull it up going down the stairs, which she informed us is exactly what princesses do with their long dresses.  Unfortunately going up the stairs inside she tripped and fell HARD – poor girl had some seriously awful looking bruises on her legs.  Our babysitter had been running late so that put is in a bit of a crunch getting there and we just felt super rushed on getting in, hitting the bathrooms and getting inside and poor Lilli got the brunt of it rushing up the stairs.

TPAC! Brent and I used to go to a ton of shows there “Before Kids”, so it was finally fun to take one of the kiddos to a show.  Wicked is coming again this spring and we’re already planning to go with some friends.

We knew several people going to our same Saturday afternoon show and we even managed within the throngs of people to run into most of them! Lilli saw her friend Serif and managed to completely try to avoid having her picture made.  We ended up being on the SAME row as one of my coworkers, just a few seats down.  How random is that?

By the time we got settled we only had to wait ten minutes for the show to start.  We were on the floor, about three quarters of the way back and it’s just so hard to see.  Lilli ended up sitting in Brent’s lap the whole time and I was even behind a guy that I was constantly having to dodge.  It’s hard being short in a tall world.  But it was a great show, the music and costumes were wonderful and we all loved it. 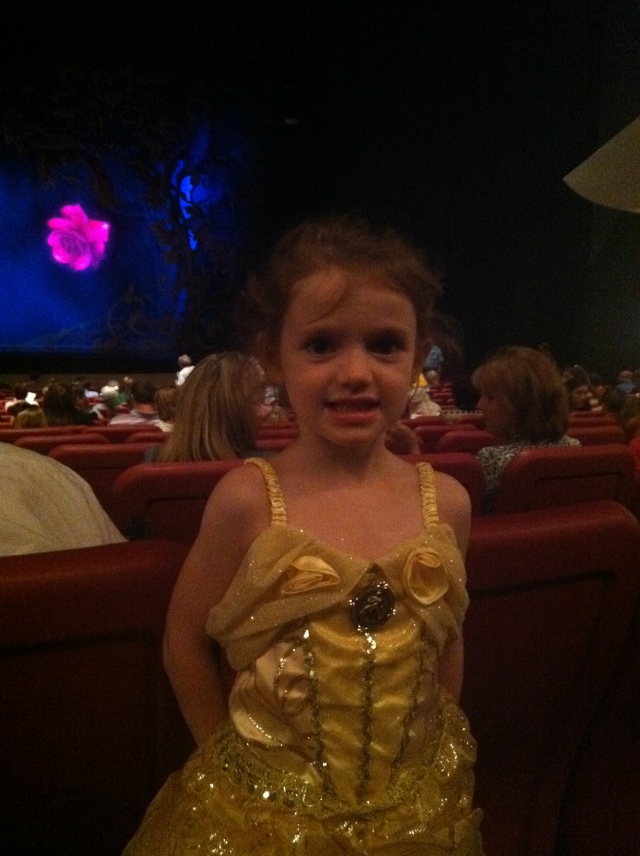 Since we rushed in, afterwards we let Lilli play around the fountains and explore the War Memorial Plaza. 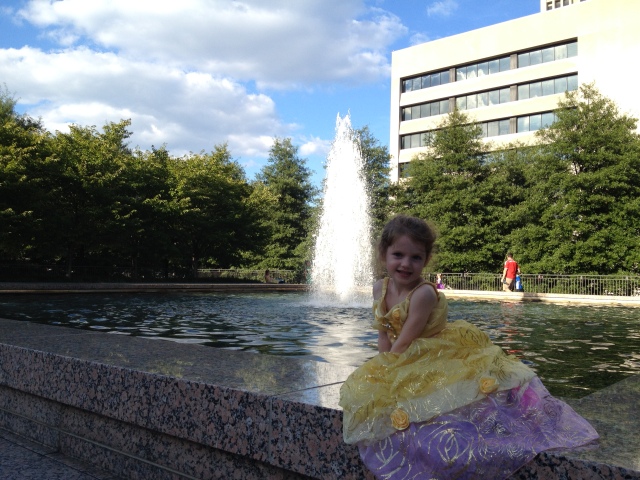 Mother-daughter pic.  The only proof Brent is anywhere with us is that we have pictures of us.  Somebody had to take them, right? 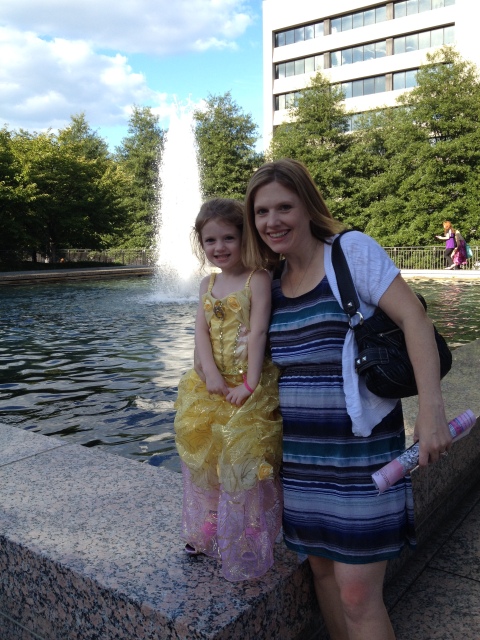 As much as Lilli enjoyed the show, I think she might have enjoyed just being out with BOTH of us the most! Afterwards we took her to Starbucks for a Frapuccino.  She loves some Starbucks.

And little sister was good for Miss Tina, and so she didn’t feel TOTALLY left out I ordered her some Belle pajamas from Disney as well.  One day she’ll get to hang with the big kids!