On the Saturday of Thanksgiving weekend, we woke up and ate some breakfast before everyone started heading back to their homes.  Somehow Uncle Bruce ended up feeding Abbi her breakfast.  She was quickly handed off before her morning poo.  And Chloe had about the best photobomb ever, especially for a dog! 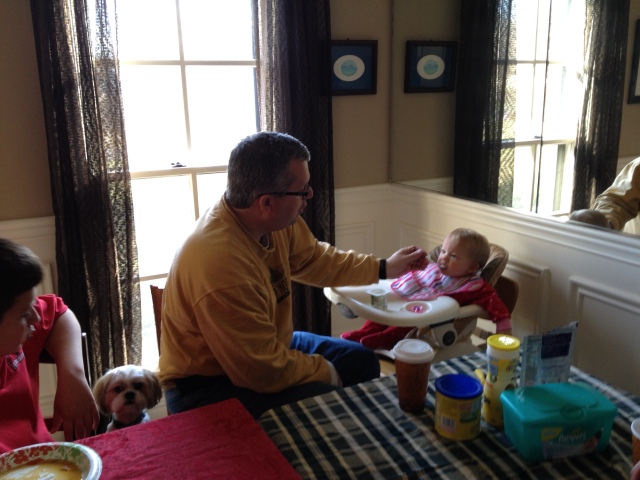 Everyone was a little tired after the busy Thanksgiving weekend.  Except for Abbi.  She runs on pure adrenaline.

About three seconds after everyone left, Lilli wanted to know who could play with her.  Mercy.  She had such a good time with her cousins, and the poor child was so worn out.  She had hardly taken time out from playing to eat, and her Eastern Time Zone cousins had been getting her up a bit early.  So, after resting a bit during Abbi’s nap we headed outside to enjoy the sunny and somewhat warm day.

The girls went for a drive.  Abbi still isn’t crazy about her sister’s driving, so separate cars are a must.

Sunday afternoon we got all the Christmas stuff out to start decorating.  I don’t think Lilli could have taken it another day if we didn’t get our Christmas tree up.  It’s definitely no small project getting the house decorated for Christmas, and this year I ended up skipping doing the garland on the stairs or any decorating in the bonus room.  With the quick turn between Thanksgiving and Christmas it just didn’t end up happening.  Our Christmas cards will be ready tomorrow so we’ll be lucky just to get them in the mail in time!

Abbi ran some errands with Brent to the pet store and she was mesmerized by the birds. 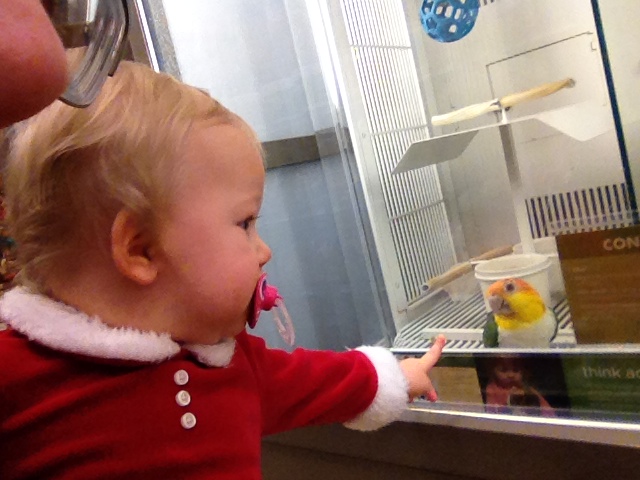 She’s been eating more and more real food, so hopefully before too terribly long we can be done with all the expense old baby food.  After Christmas we’ll start phasing in real milk and cutting back on formula.  I think my grocery bill will start clapping when all of those things are off my receipt! She really likes bread right now, and also really enjoyed all the leftover dressing we had after Thanksgiving from her Granny.  She also eats shredded cheese, chicken nuggets, pasta (like Spaghetti O’s), PB&J and some small diced fruit.  I’m sure there’s a few other things I’ve forgotten in there.  We basically give her some small portions of whatever we’re eating and she’s been doing great with it.