On December 7th we headed over to our local Brentwood Library for their annual Santa meet n greet.  They had a whole morning of activities that day, including a free magic show.  We’d picked up magic show tickets for the 9:30 show earlier that week.  We’re not early risers, so we thought that would be okay.  I think Lilli woke up around 7:30 and came in our room and around 8 we started heading downstairs to have some breakfast (Abbi was still asleep) and we discovered Pippin had pooped EVERYWHERE.  At some point in the night, one is his toenail claws had gotten caught on his collar (probably while he was scratching an itch) and he had been stuck like that all night.  And in his panic he pooped ALL OVER the office and foyer.  Seriously, EVERYWHERE.  So naturally we ended up running late to the show and had bacon in paper towels during the five minute ride there.  Brent dropped Lilli and I off at the door and came in later with Lilli, and we ran in right as the show started. 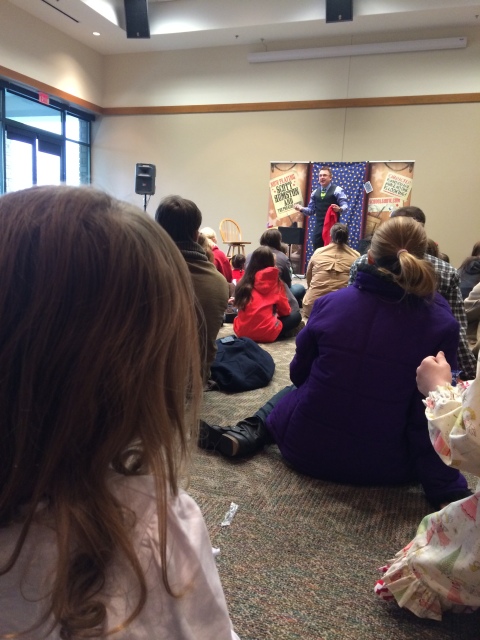 It was a really cute magic show.  We’d never done anything like that before and he mixed in some fun card tricks with puppets and other fun things.  Lilli loved it and it will definitely be something we try again.

He ended by turning this piece of paper into a ton of snow.  Very cool.

Abbi enjoyed it, or mostly enjoyed chewing on things during the short 30 minute show. 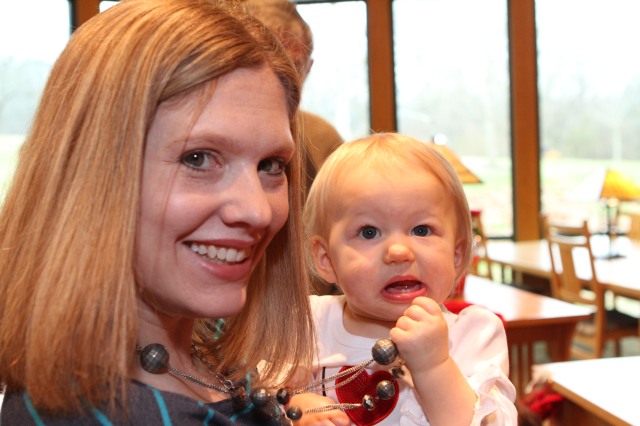 Afterwards we went and got in line for Santa.  Our rush out the door that morning thanks to Pippin pretty much threw me off from any kind of bow or cute accessories.  The line was maybe 10-15 minutes or so, and after sitting through the magic show we weren’t sure if Abbi’s patience would be worn out, but she did great.  She doesn’t have much stranger anxiety, and she was definitely curious about this guy and his outfit (and why he couldn’t have just grown a real beard….)

Lilli launched right into telling him what she and her sister wanted while Abbi just smiled away.  She told him she wants a girl pretend snake – she has her big snake and we have two little ones, so she says we need a mommy snake.  It’s a bizarre request, but much cheaper than electronics, phones and video game consoles.  She has held to that all Christmas long, too.  And she told Santa her baby sister wants a baby doll. 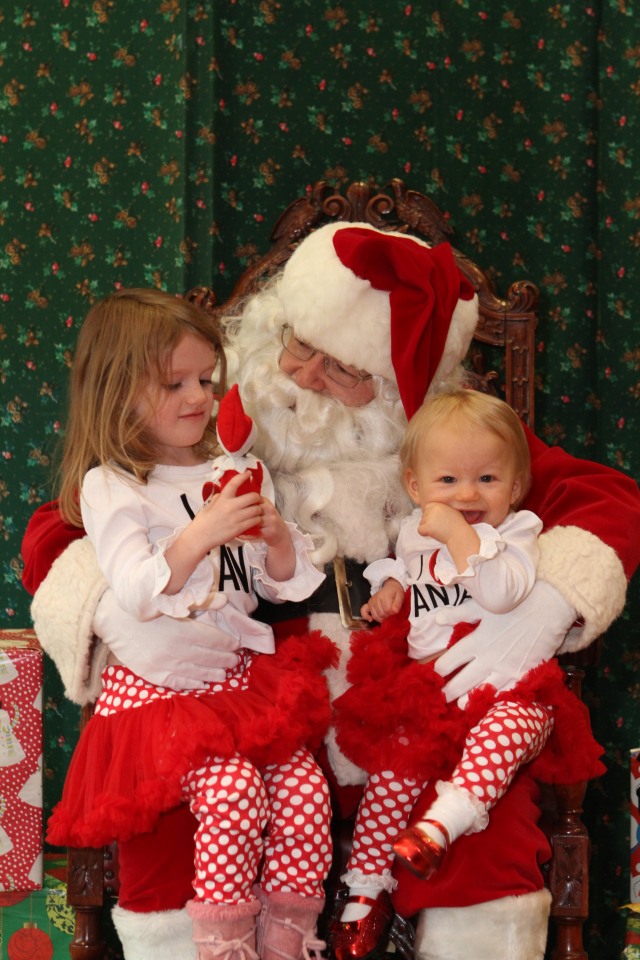 We finally had to tell Lilli to look up and smile since her sister was doing so well.

And then Abbi couldn’t help staring some more. 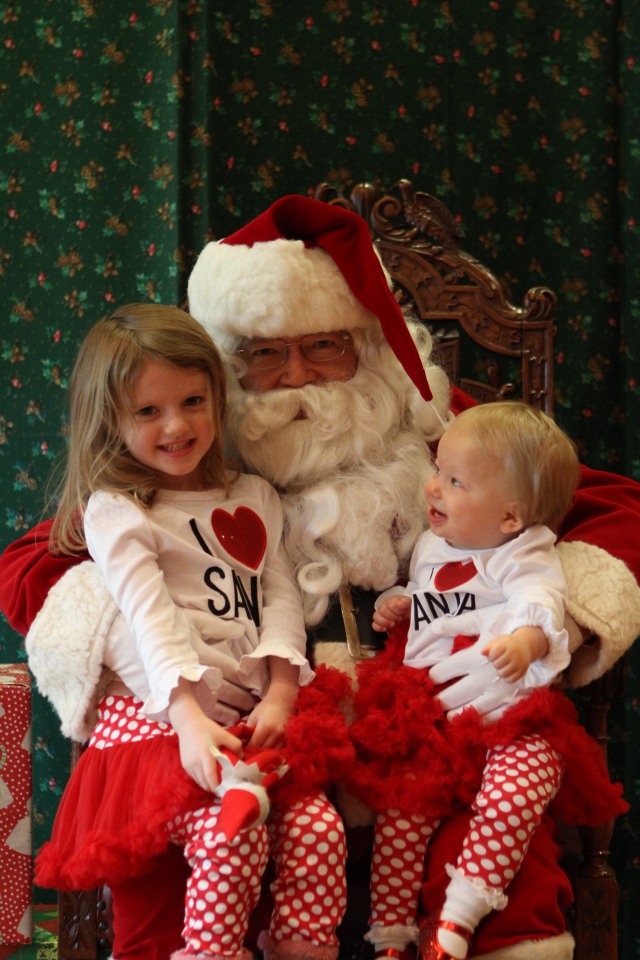 We were really glad to get a good Santa shot.  Last year she only stood near him (and looked scared), in 2011 we also looked pained by the experience, in 2010 she had no fear but no real smile, and in 2009 she was clueless! (She also saw him here in 2009 for the worst picture/photography ever. and we had a second cry in 2011 at a church Christmas party.)

Clearly, we had a lot to celebrate with that picture success.

So we headed to the snack room and had cookies, donuts, juice and muffins.

Pig Pen put away some muffins.

I took Lilli around to the Santa letter writing station and a game area where you guess how many M&Ms were in a jar, and then we headed over to the face painting area where Abbi totally stole her thunder in the cute department. 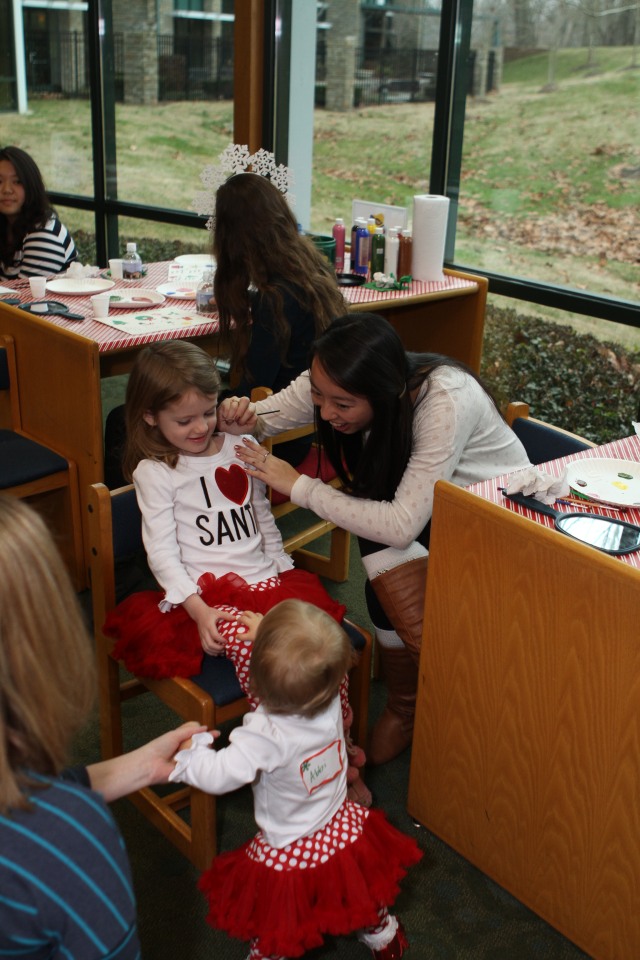 And we wrapped up with a few more pictures by the poinsettia tree in the lobby.  Some bows would have been seriously nice that day.  Thanks Pippin for making our crazy morning EVEN CRAZIER!

But all in all, I’d say these pictures are definitely keepers that we’ll be putting in our Santa picture book and looking back and remembering the fun day AND the extra excitement Pippin added that morning.