Florida p7: Blame it on the Rain

We knew these storms had the potential to be rough and severe, and naturally that set in around 1 am.  Brent cracks me up with these screen shots, but it’s so helpful in our family blog in remembering all the crazy times.  Lilli LOVES looking back at all the fun things she’s done, outfits she wore “first” and thing she can’t remember.  So I’m pretty sure this My Radar screenshot will help us remember one of our most insane nights, ever. It had been thundering and lightening all night long, but around 1 am it picked up with insane pouring rain, lightning and thunder on top of us.  The house (which was on stilts) had been shaking in the wind all day, and all night long it felt like we were on a boat.  It was truly insane.  Abbi was waking up off and on in the storms, but somehow Lilli was sleeping.

And then around 3 am – the bottom literally fell out.  We heard it start hailing, even more insane thunder and lightning – right on top of us – and then the tornado sirens started going off.  Lilli started screaming, Abbi started crying and we were all trying to figure out where our “safe place” was in this house.  The sirens didn’t last long, and Brent ran out and moved the car under the house.  (The two car “stilts” carport was a tough maneuver so we hadn’t been parking under there.) From that point on Lilli was in our bed all night, and since it was a King it made us want a bed that big so much more than we already do! They were broadcasting the weather on the local channels, and showing the graph of all the lightning strikes.  It seriously thundered/lightninged non-stop from 1 am to about 6 am.  It was a long, long night.  The wind was insane – it seriously felt stronger than the hurricane we were in back in 2011.  The fact that is just lasted so long, all night long, was just exhausting.

Lilli and I watched the weather together from her bunk bed.  That’s actually the only time we turned her little TV on.

The next morning it just kept raining and raining and raining.  It always looked like it was almost over, but the storm system just kept sitting on top of us.  The final estimate was somewhere around 15 inches of rain in 36 hours.  Basically a hurricane, minus the swirling spouts and stuff.

We knew it wouldn’t be a good beach day, again, so we thought we’d try to head West to an aquarium in Pensacola.  The first direction we tried out of the neighborhood was closed due to a sinkhole. 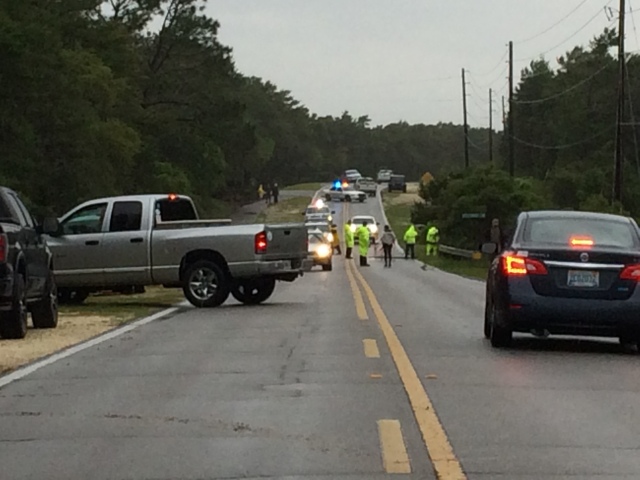 And then we started seeing more and more flooding.  We weren’t even 5 miles from the house at this point. 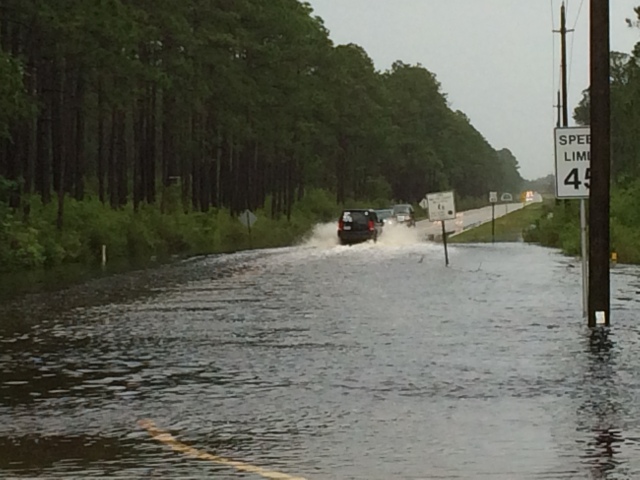 And around this point it kept getting worse and worse and we decided to try and turn around while we could.  We thought even if we made it to the aquarium it might be even harder to get back, and it definitely wouldn’t be worth getting stranded with the girls.

So we hung around the house.  It was such a great house – here’s a shot of the main living floor – “open concept” kitchen/dining/living room with a full bath off on the right hand side near the couch. 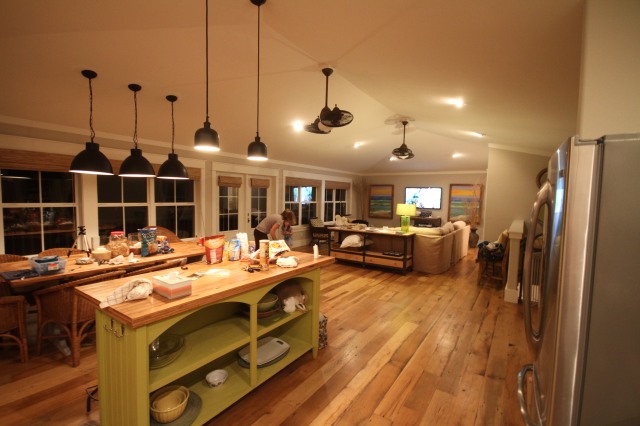 A view of the downstairs.  We loved the super tall ceilings throughout.  There were three bedrooms down here, and one full bath in the hall for the girls as well as an en-suite for the Master.  All the finishes were high end, and we loved all the furnishings.  Totally our style.

Lilli’s bunk bed room, with the two TVs for each level of bunk bed.  She loved this room! 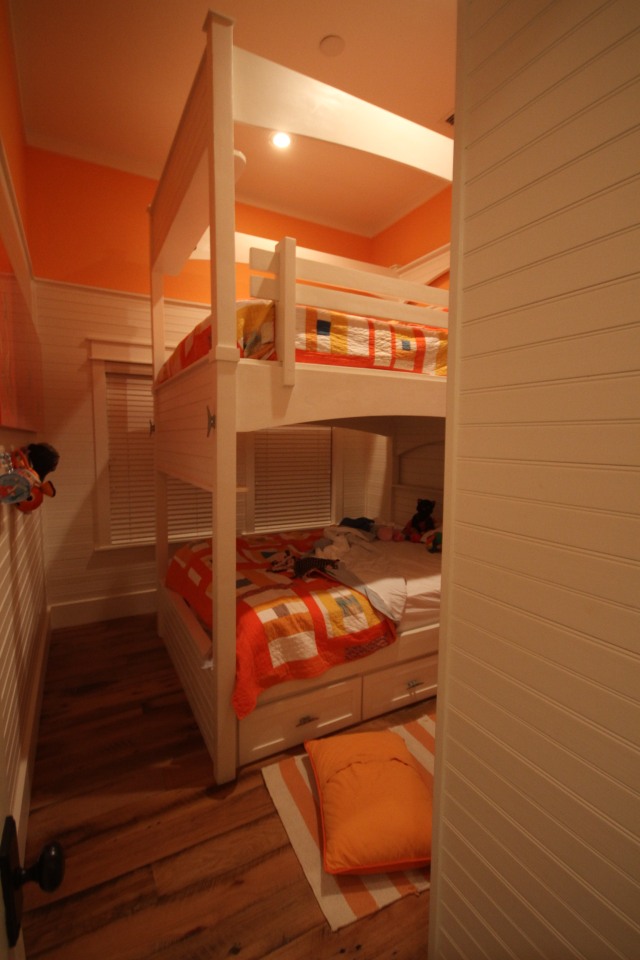 The girls played princesses for the millionth time.

During Abbi’s rest time we took some selfies, and snuggled up for some TV time.  At least Lilli knows how to relax (generally). 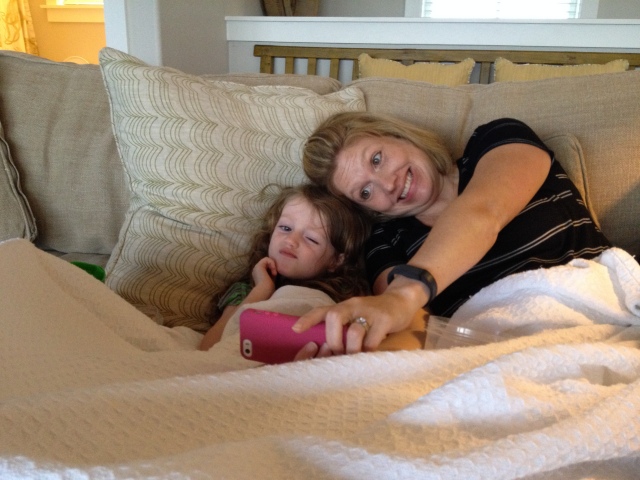 During a slight break in the rain Brent and Lilli ran down to check out the beach.  Of course it started pouring on them while they were there.

Checking out all the debris that had washed up.

It did actually stop raining, once and for all, right before sunset.  So we all ventured back down to check everything out.  It was now chilly, too.  It was actually quite a bit warmer back in Nashville at this point!

Lilli had to document everything with her camera.

The beach definitely looked different.  All kinds of plants, seaweed, debris and “stuff” washed up, and the sand was so packed all over.

There was also this “foam” all over the beach.  I guess the crazy waves and wind had created all this foam from the white caps.  It was bizarre. 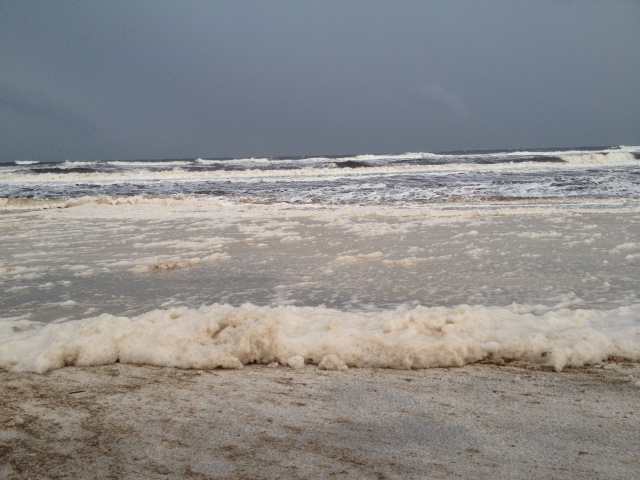 Lilli had wanted to know where all the flood waters go, so we walked down to the edge of our neighborhood, which is bordered on both sides by a state park, to show her this “river” that had formed of run-off.  It was crazy – very deep, extremely fast moving, and just so dirty – running into the ocean.  A large bird was in it just watching for things to catch.  We saw a woman walking around everything and she came over to talk.  It turned out she was also from Nashville, and her daughter was supposed to be getting married there on the beach on Saturday.  She was really upset at how terrible the beach looked, and the girls had all been stuck there alone the night before in the terrible storms.  All of the upstairs windows in their rented house had blown out during the storms and the poor woman was black and blue all over.  Another one of the houses they had rented for the wedding party had flooded, so they were definitely having a worse trip than us.  And to make it worse, they had tried to get out to Walmart and it took them 4 hours (to go just a few miles) because they got stuck trying to come back.  It made us feel so glad we had turned around! It definitely wasn’t how we wanted to end our vacation, but our conversation on the beach made us feel a lot better about the circumstances we’d been in and very glad that our house had only had a slight leak by a back door and down into the downstairs bathroom.