I’m a sucker for a little girl in a red gingham ladybug dress.  I’m not sure what it is,but if I see a ladybug dress at a consignment sale, and the price isn’t re-donk-ulous, I will buy it.  Done.  I saw this one last spring and new it would be so cute for Abbi with her blondie curls.  After church I had Brent take a few pics of her in it.  None of these have been Photoshopped, so I think some cute framers will be in our future once he does, and that’s a good thing because there’s about 1 picture of her framed in our house! (Poor second child.)

Abbi at 17 months is a tornado.  An F-5 tornado with a water spout mixed in that is also unfortunately in an earthquake zone.  She can get into something before you can blink.  Lilli has perfected the mouth sweep, and can even unbuckle, hop out of her car seat, get a contraband item away from her, and get back in before I get angry looks of concern from people in traffic.  Babies are tough because of the endless crying and lack of sleep, but toddler are a force all their own.  And MERCY, this girl is curious.

Sometimes it helps to just whack her in the face with a giant ball.  She’ll learn to put her hands out.

She’s saying a few more words and Lilli is excited that a version of Lilli is one of them.  She doesn’t have as many words as Lilli did at this age, but Lilli has been a pretty exceptional learner.  And we spent a lot more time with flashcards and such with her.  It will be nice when Abbi can communicate more and won’t be as frustrated.  And it will be nice when she quits throwing her body on the ground and screaming at the top of her lungs when she doesn’t get her way.  She is most definitely a strong willed girl, and currently the stroller and carseat are torture devices that rob her of her American freedom to break stuff.  I know Jack Bauer has some crazy ways to torture people,but I’m fairly certain putting a terrorist in the car with Abbi for half an hour could most certainly work just as well as sharp knives. 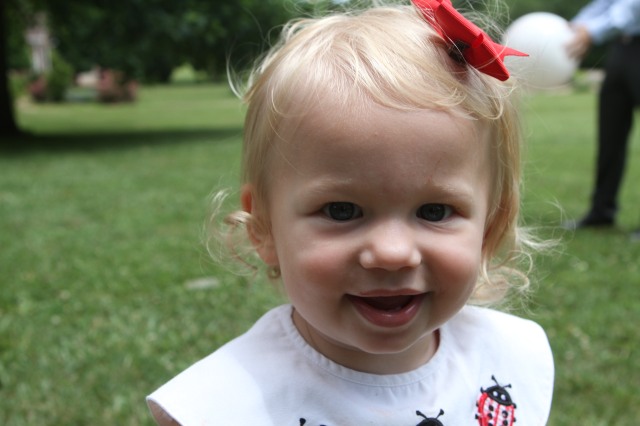 Lilli is a great big sis and surprisingly can pitch in with patience when we have none.  Particularly at the dinner table.  She’s less empathetic in the car when she can’t hear the movie or Ipad. (Ahhh-beeeee stop fussing. I CAN’T HEAR. I never realized her name could have THAT many syllables.) Lately she’s been “watching” Abbi while we cook dinner and they actually do pretty well.  I try not to listen too bad “Okay Abbi, you can climb on the couch but SIT DOWN.”  They fight PLENTY but for the most part they’re starting to play together pretty well.

We’ve had to write down the number of days until kindergarten starts on her calendar.  More and more of her friends are leaving for other summer programs and things before kindergarten starts, and this past week she’s decided she’s tired of her school and ready to move on. 44 days and counting, and I’ve assured her it will go fast.  And that gives me 44 days to get her hair trimmed up because the Rapunzel/Tangled look is getting a bit crazy!! 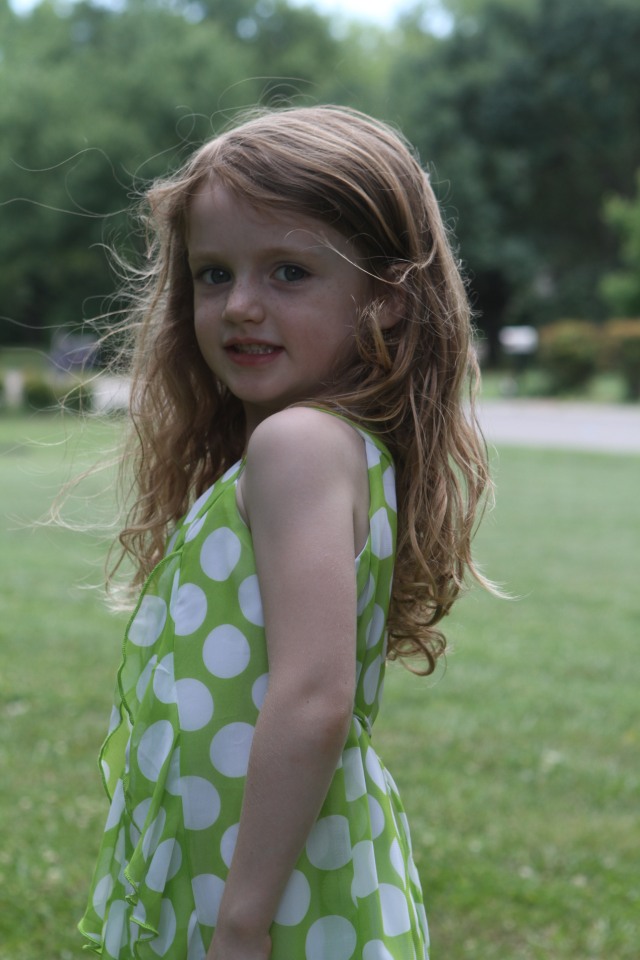 Such a stinker! For all her exhausting ways lately,which I like to think are being influenced by her canine teeth coming in (which thankfully will be it until 2 year molars), she is a sweetie pie.  She loves to cuddle and can be SUCH a ham.  And an antagonist to her sister which is pretty hilarious.  The girl is a hitter, but apparently it happens enough at school that if you tell her to “say she’s sorry” she’ll give whatever she’s near a hug.

Chip likes to protect our zucchini from any predators that may threaten it. 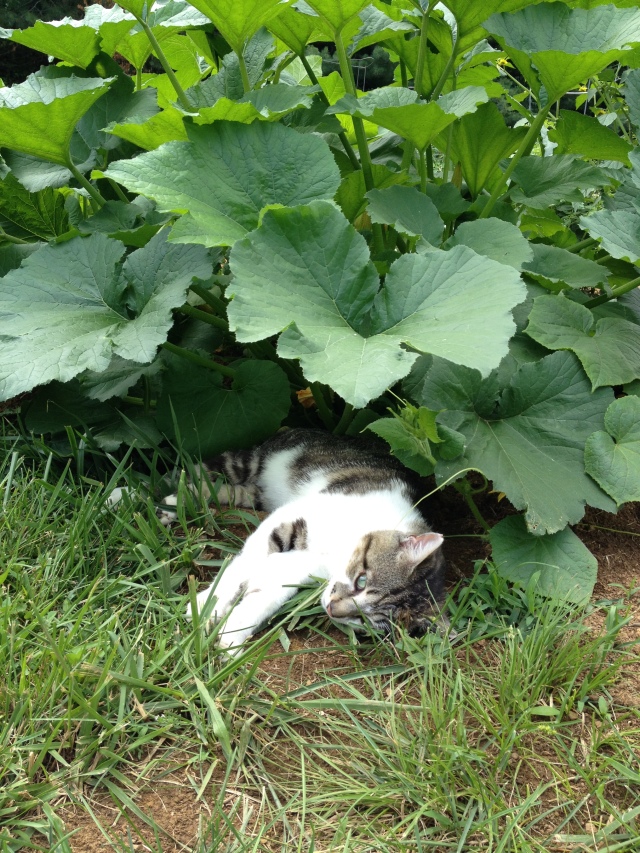 We spent some time at the splash pad.  Abbi is warming up to it some,but is constantly running from thing to thing.  There is NO relaxing at the pool with her.  It’s complete and total exercise just chasing her from one end to another the whole time. In and out, up and down, back and forth. 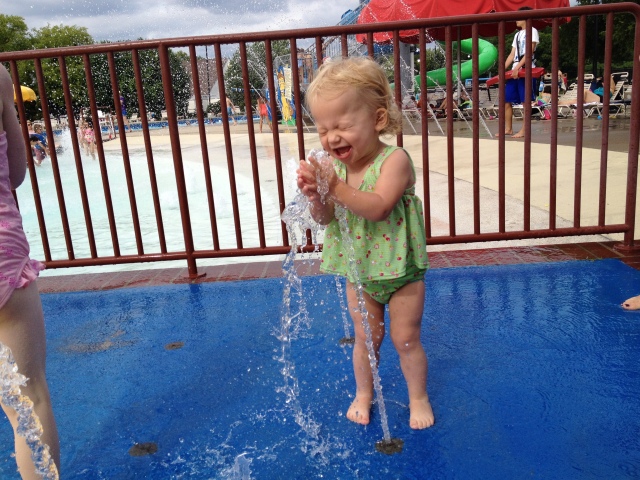 Off roading is where it’s at. 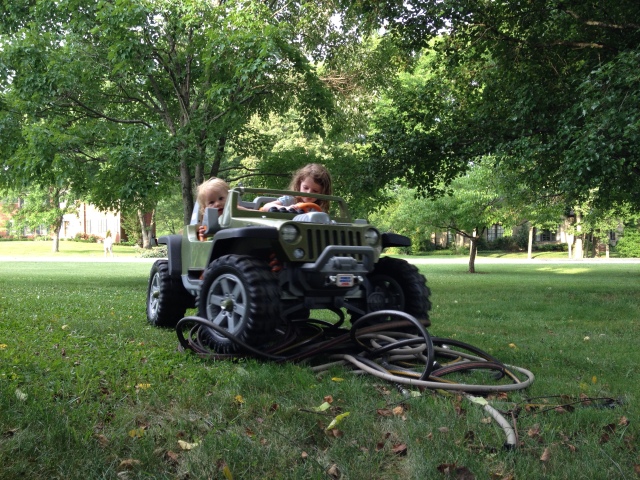 Today – sand and gravel, Tomorrow – mountains and cliffs.  All part of her training to be the next American Ninja Warrior. 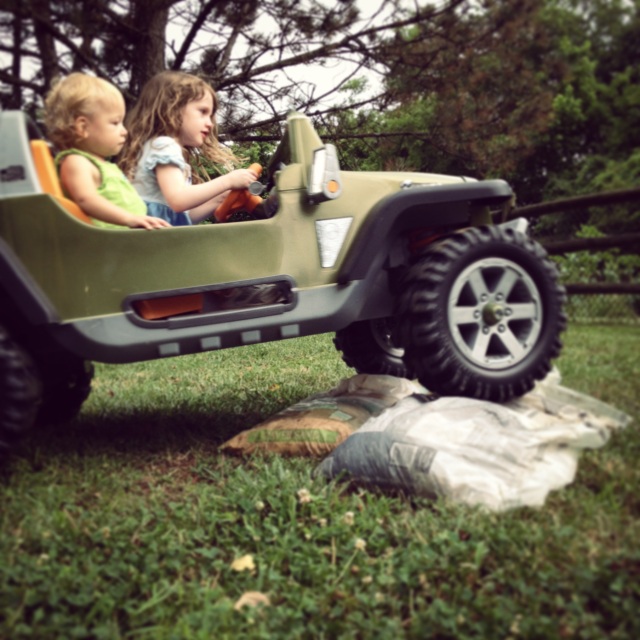 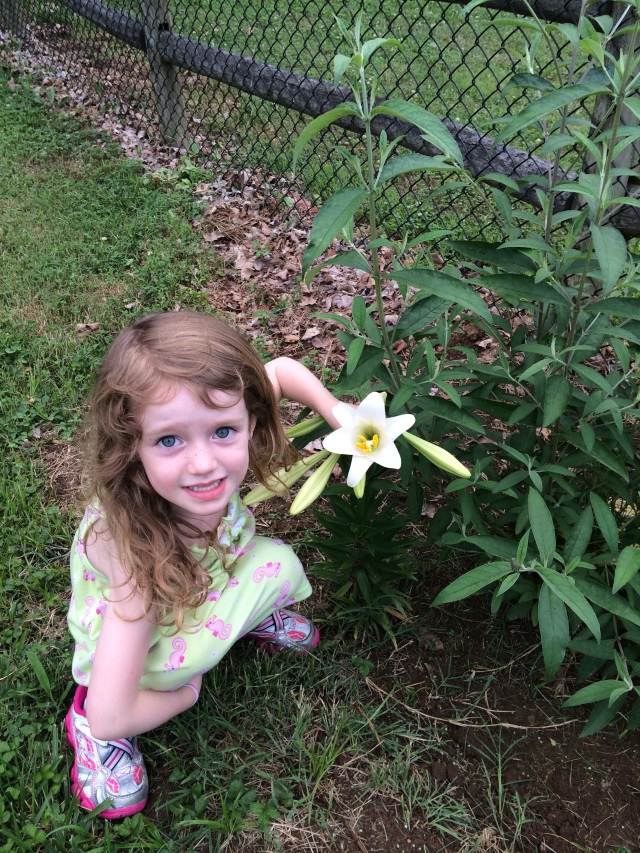