Another Saturday! I got my long run done and somehow managed to not take a single selfie? What’s up with that!

It was a pretty day and the girls did some driving.  Abbi loves to be driven around the yard in the Jeep.  For whatever reason, Lilli isn’t as excited to drive anymore but sometimes she does still oblige little sis. 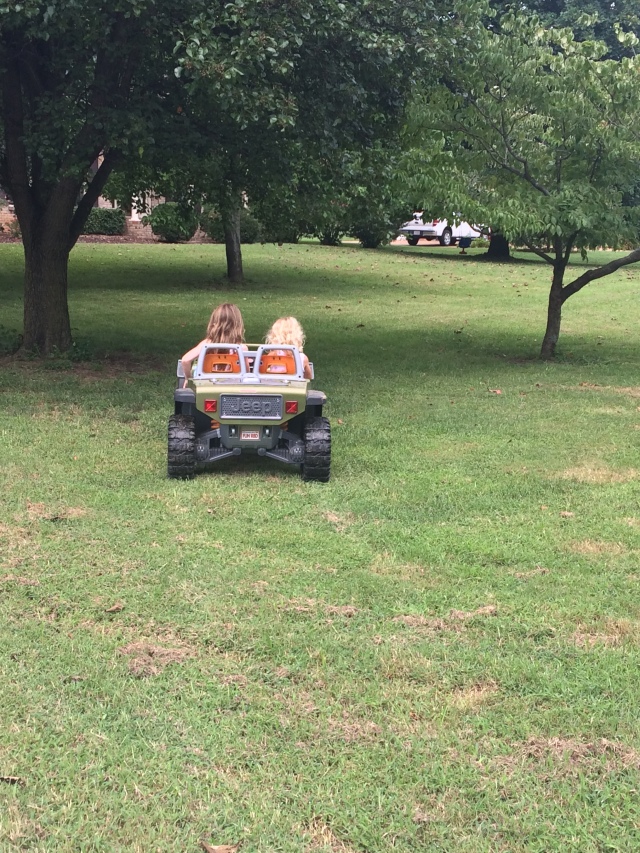 They collected leaves and hit things with sticks and had a good time. 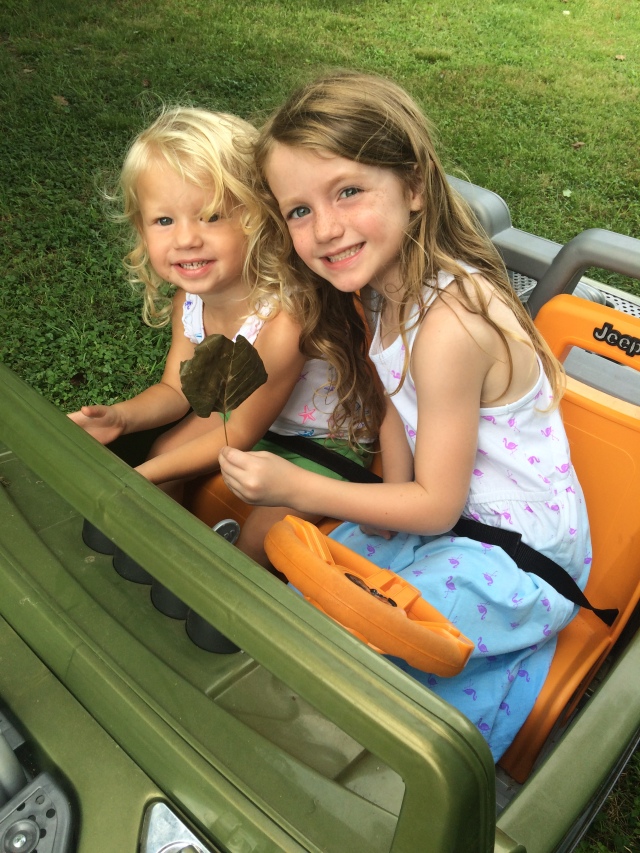 Post nap.  I was cleaning out the car and Lilli was helping me vacuum and wipe it all down post-vacation and other summer trips.  Now that Abbi is “free range” her 3 hour nap often turns into a 1 hour nap and we hear her wandering around upstairs opening and closing doors and rattling the gate.  I wasn’t exactly thrilled to have an extra pair of hands on our project. 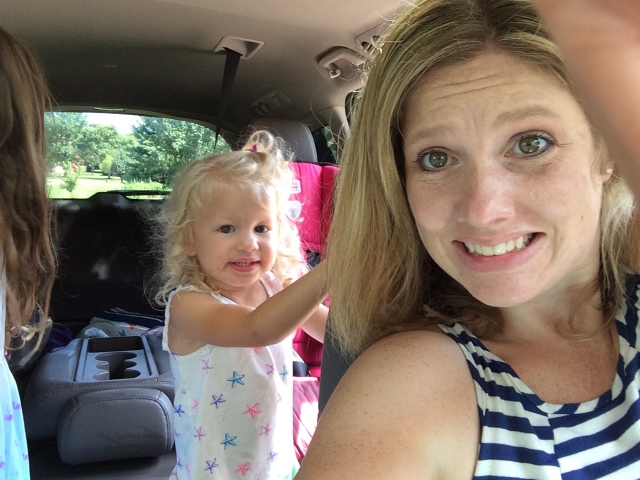 I was a little worried a short nap would make her fussy at our big event of the weekend – the Fair!! (All previous years links are here!) We love, love, love the fair and every year as they get older it gets more and more fun.  This was our second year to go with friends, and Lilli was very excited to get to have Serif as her fair buddy again.

This year we had to go on a Saturday since both kiddos had already started school and we really need to be responsible parents and not keep them out until midnight on a school night.  The weird thing about Saturdays is that the ride wristbands only flip around late afternoon, so when we first got there we did the fun little farm area first.

Our big first graders and Abbi

As soon as we could get the evening wristbands we did and the kids wanted to hit the Ferris Wheel first thing.  Last year the lines for the Ferris Wheel were crazy when they wanted to ride, so neither one wanted to miss out this time. And this year it was one of those crazy open Ferris Wheels.  I’ve never been scared of any ride, and there’s nothing I won’t ride – but seeing Lilli in this very open, crazy high thing was nervewracking! She’s so tiny I don’t see how any lap belt can keep her from sliding right off. 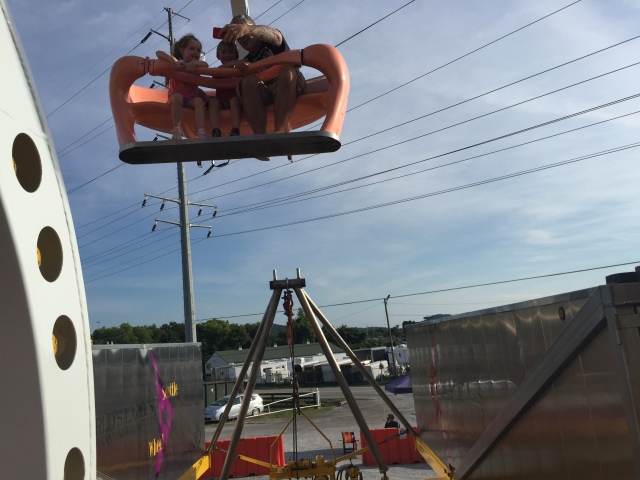 Instead of riding with Brent and I she chose to ride with Jeff and Serif.  This is literally my favorite picture of the entire night.

I have to admit – it was a little nerve wracking. The traditional gondolas never scare me but this thing was just…..minimal.  Also, in going through all the fair pics it’s pretty obvious I don’t shy away from “excited fair selfie poses”.

The lines were so short at this point that the kids were just hopping from ride to ride.  From fun houses to swings to slides and obstacle courses they were getting their wristband stamp value!  We just bought tickets for Abbi but really probably should’ve gotten her a stamp, too.  She is beyond fearless.

Big sis was a champ and went on the baby Nemo ride with her.  Serif was going to go as well but was actually too tall!! He’s just over that next height category, so there were a few things he could do that little old Lilli couldn’t because of her height!

Riding the trains with baby sis.

Big kids in the spinning cups. 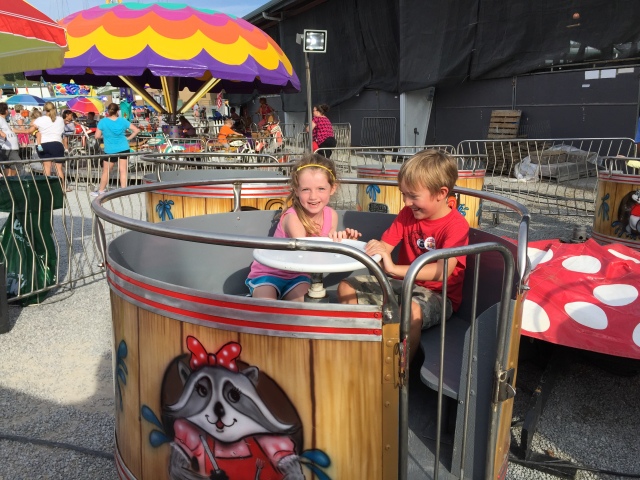 No clue what they were laughing about here, but you can tell they were having the best time!

Riding the bumble bees together.

Riding the boats.  Once it got dark, after we ate, the lines were starting to just be CRAZY.  One adult would usually get in a longer line while the kids hopped a shorter line.  It’s all about the strategy.

The Tilt-a-Whirl ended up being a favorite of the night.  I don’t even know how many times we rode it, and in how many different combinations.  Me and Brent, an adult plus big kids, various combinations of adults and kids.  It was just fun.  Plenty of opportunities for selfies.

And we always let Lilli pick one game.  She wanted to do this arrow throwing thing. They gave her 3 arrows and I was hoping she might get one – the girl got 2 out of 3 so she won a medium prize! She’s a ringer! 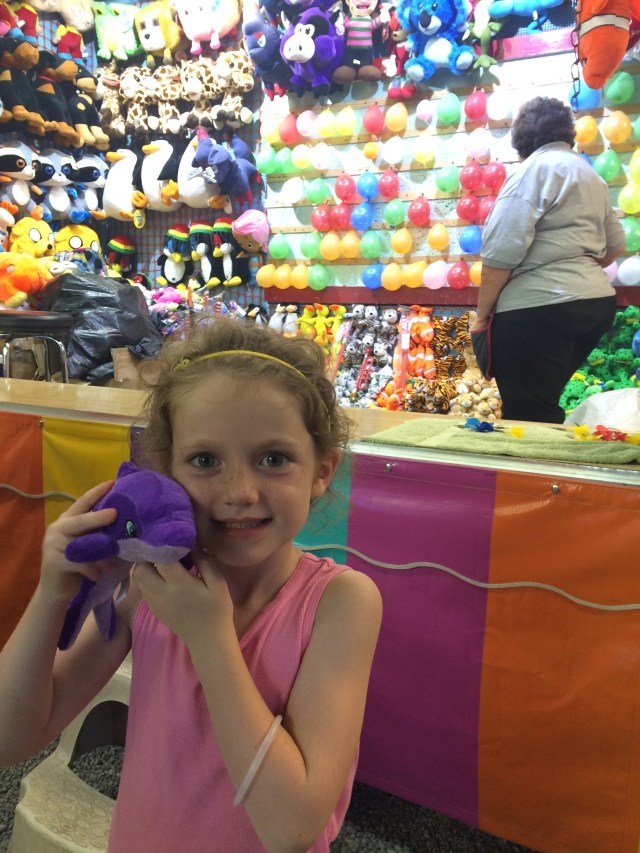 No clue what we were laughing about – but it was the fair so I can guarantee we were having fun and consuming sugar.

We stayed until after the fireworks and a little after 11.  We should have just stayed until it closed at midnight because getting out of the parking lot was sheer insanity.  Three out of 4!

We had SUCH a great time and I wish the fair came more than once a year.  Except it costs about a million dollars.  We packed it all in from rides to funnel cakes and lemonades and animals and fireworks and literally everything in-between.  I can’t wait to do it all again next year!!