The Busiest Day of the Year

We try really hard not to overcommit and run ourselves absolutely ragged and exhausted.  Most of the time we do really well with that.  And then, there’s that one day of the year, always around the holidays, where it’s just impossible to avoid.  And that was December 3rd last year.

First was our church’s “Breakfast in Bethlehem”.  We bought tickets to that, and then realized it was the same day we had (free) tickets to our annual Brentwood Library Magic Show and Santa visit.  We thought we’d be able to eat breakfast at church and then run out to the library, but they did the program and crafts first and then we got to eat the catered Cracker Barrel breakfast.

We were seated close to the food line so we were able to jump in line, wolf down some food and visit the outdoor petting zoo for a minute before the alarm we’d set for us to head to the library went off. 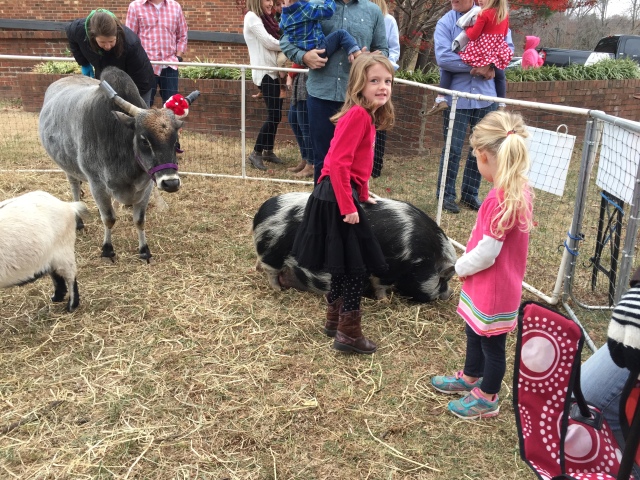 A petting zoo is hard to walk away from…..

We had tickets to the magic show, and it’s just an annual favorite for us since moving out to Brentwood.  The same guy comes every year and his show is fun and funny, and a little different every year.

Abbi wasn’t quite sure about Santa, but when it was time she went up and actually smiled, proving that having two good smiles with Santa IS possible! Lilli asked for Rainbow Looms and Abbi for a shiny car with blue wheels.

We ate some of the cookies, wrote letters to Santa, Lilli got her face painted, and we played a few of the games before heading home for lunch. 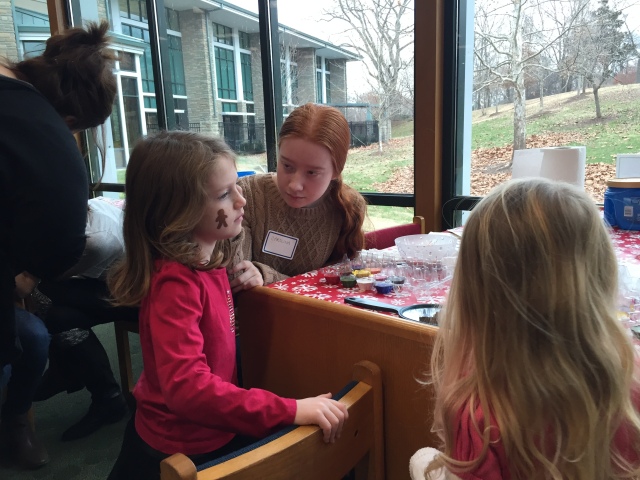 Next up – Abbi had a birthday party for her school buddy Leila (in the middle) at gymnastics.  She and Leila were already in the same gymnastics class when Abbi started at her new preschool.  Such a small world! So now they’re school and gymnastics buddies, and sweet friends.

This was Abbi’s second time to go to a birthday party at LIS and she had a great time with her school buddies.  LIS is practically home away from home for these girls….. 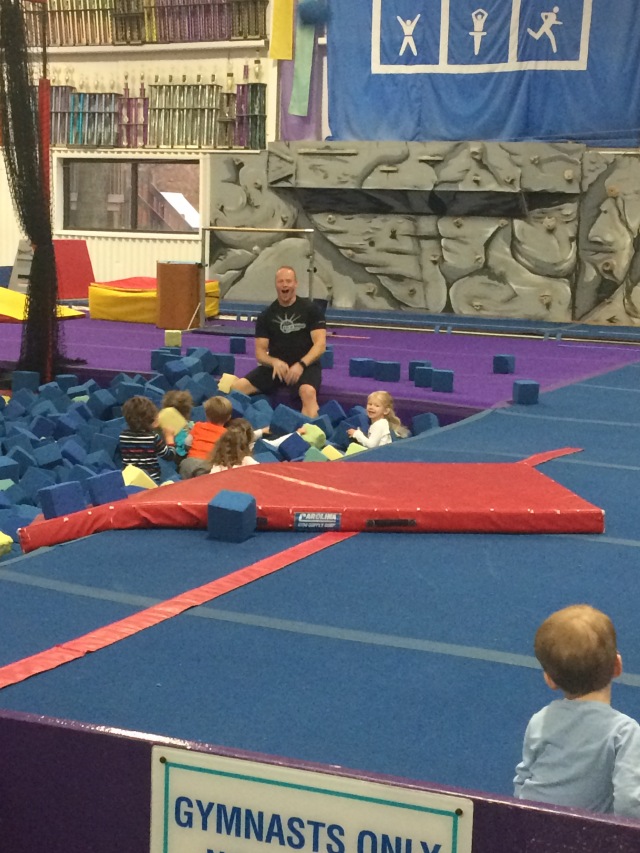 The coaches make it so fun for the kids, Abbi was having the best time.  That’s Abbi, her little buddy Isaac, and Harper.

They were watching Leila swing from the harness.  This was the first time many of them had been there for a gymnastics party, and some of them were scared to death the whole time and others were excited to try it all out.

And then finally…..that night we dropped the girls off at LIS for Parents Night Out and we met our friends Tim and Wendy for a double date at Sinema.  It was pouring rain and parking was crazy, and we were in such a rush to get back out and pick the kids up that we didn’t even get a group shot.  We were able to make it back right at pick up time, but didn’t have time for a selfie or Starbucks that night! We had a great time, the food was just ok but the company was great.  It’s always so fun to go out with other couples sometimes.

Most of the time I think he’s got a silent scream of “Help Me” coming from his eyes….

She was supposed to be resting…..naps don’t happen much (really ever) on the weekends now.

We watched Elf for the first time that holiday season.  Always a crowd pleaser. 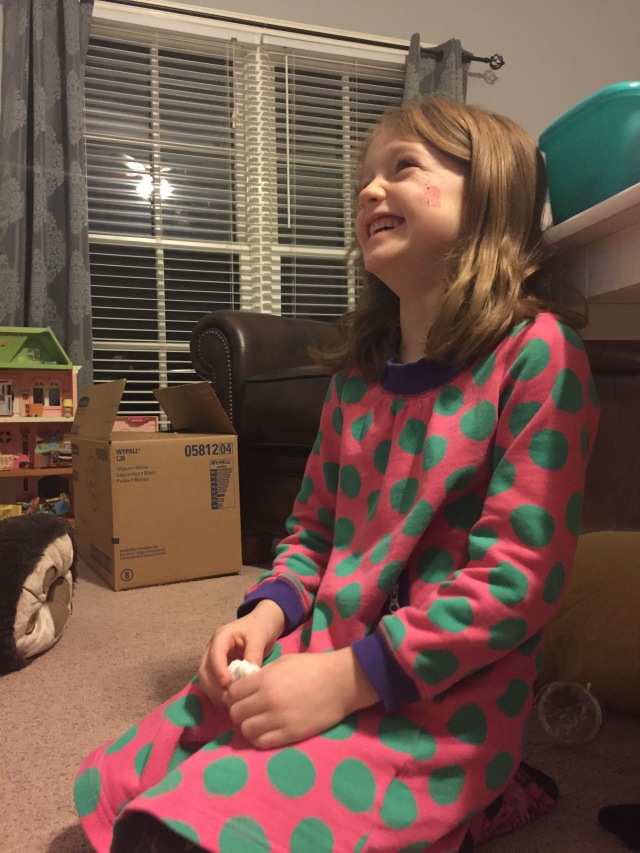 And the Brentwood Library had the lighting of the city’s tree.  We had tickets to the second reading of the Polar Express and when we went in for cookies and caroling we ran into her school friend Kaitlyn.  They were so excited to see each other, since it had been about an hour since they’d last played in after care. 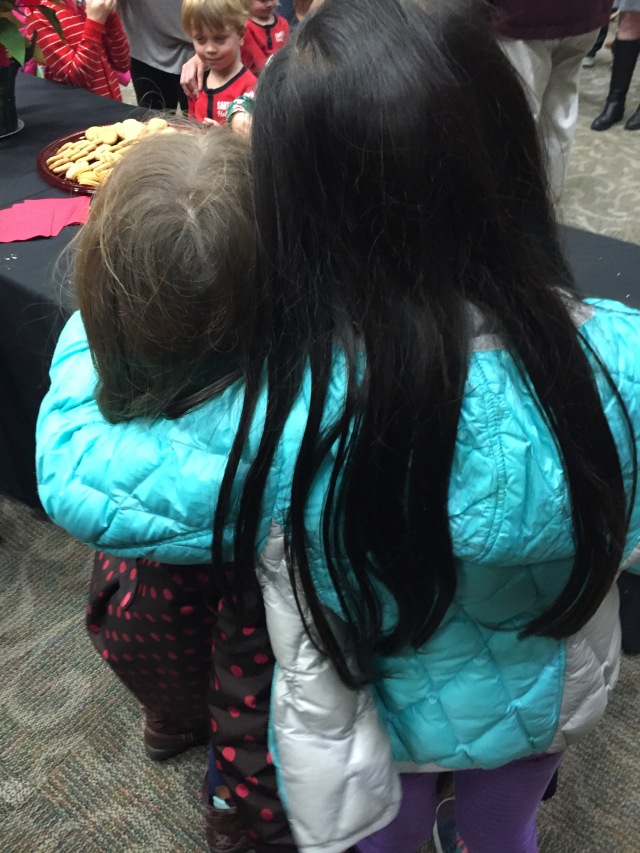 We watched the lighting with Kaitlyn and her family.

And then we headed in our for time slot for the reading of the Polar Express by the conductor.  We have such an amazing library with so many fun traditions each year, but especially around Christmas.  And speaking of, it’s time to run to the library to pick up the latest batch of books we have on hold for us! 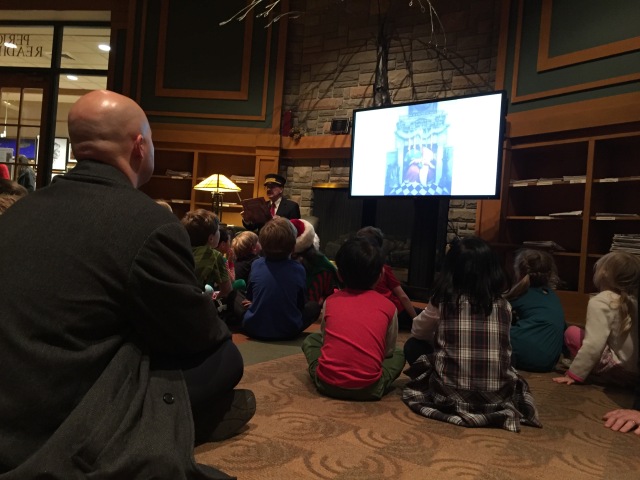