A Day in Maryland

We had a late evening flight on Monday, so Lilli got to skip school (the only day she ended up missing all year!) and we skipped work to enjoy a little more time in Maryland.

They fight like cats and dogs, but can sure get cozy when they want to be sweet.

I got up early to exercise in the super nice hotel gym (best hotel gym of anywhere we’ve stayed in a long time!) and then met these guys for a wild and crazy breakfast.  They almost missed getting to tell Grandma, Grandpa and cousins good-bye as they were driving back to Ohio and Tennessee.  Aunt Nancy’s plane had left very early so no one got up that early to say good-bye to her!

We decided to tour around Frederick a little before heading towards the Baltimore airport.  I’d found this cool model train museum/playplace in Baltimore that I knew Abbi would LOVE! 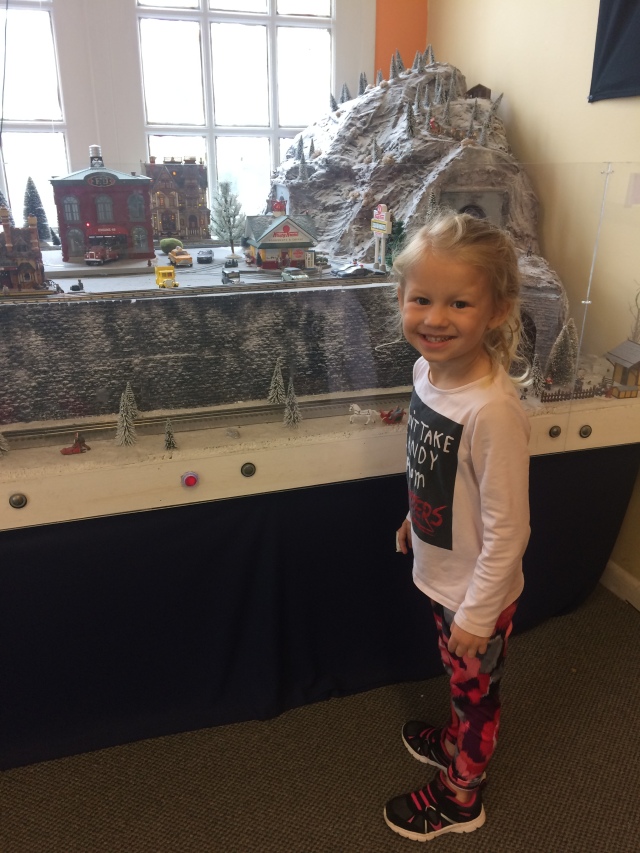 They had some of the neatest little trains and sets I’ve ever seen, and lots of buttons the kids could push.  My favorite was a Karate Kid Dojo with a “sweep the leg” button.

A giant, giant room with tons of models and little establishments as far as you could see.

They also had advertised a Lego room, which we thought would be hands on, but more looking with a few buttons.  And lots of rules about leaning, touching, being attended at all times, running, and more. 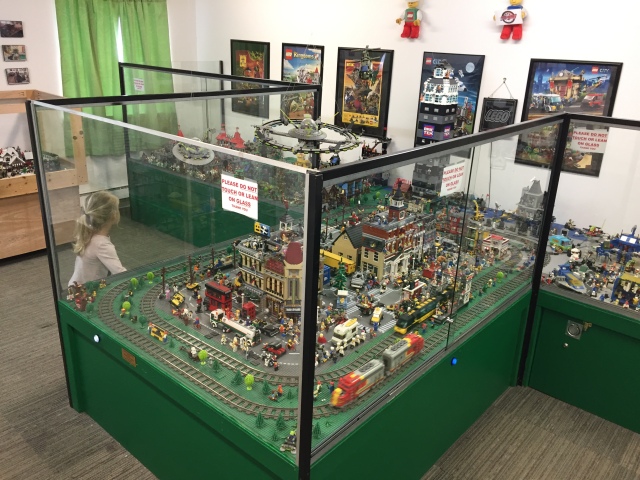 They had a large gift shop in the front and Abbi had spied these cars that she just LOVES as soon as we walked in.  They had a sign that the toys were to be played with, but to pick up after yourself.  No problem.  I was standing beside Abbi the entire time when the owner just flipped out and told us we needed to NOT play with the toys and pick them all up immediately.  I’d already been listening to him be extremely rude to his one employee, so it shouldn’t have been a surprise.  Naturally Abbi was in tears, we bought her one car (even though we didn’t want to), and left.  I’d highly NOT recommend this place just because the guy was so very rude to her, and us. 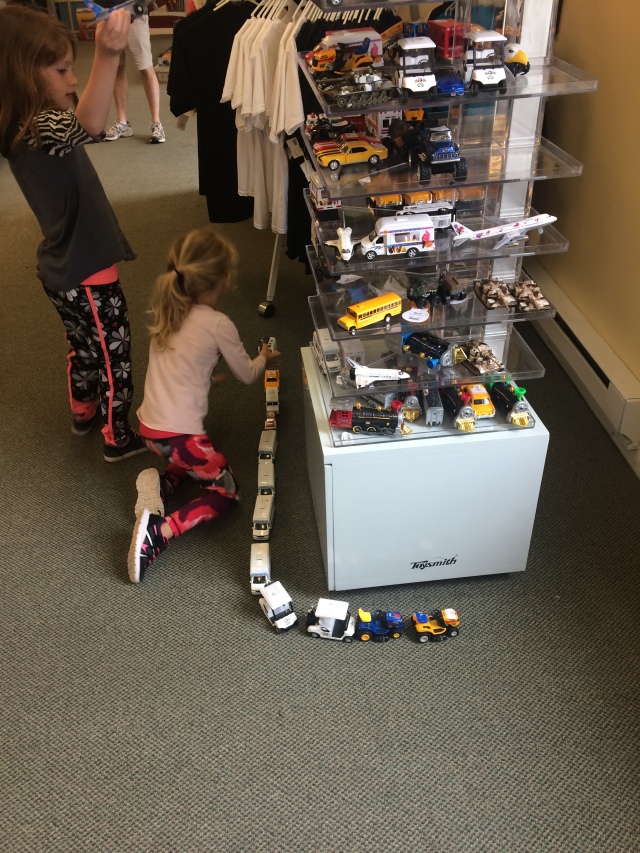 From there we tried a Mexican restaurant where the service was terrible, they charged for your chips and salsa, and the refills, and the bathroom had locks on it.  We basically decided Frederick Maryland is not our place. 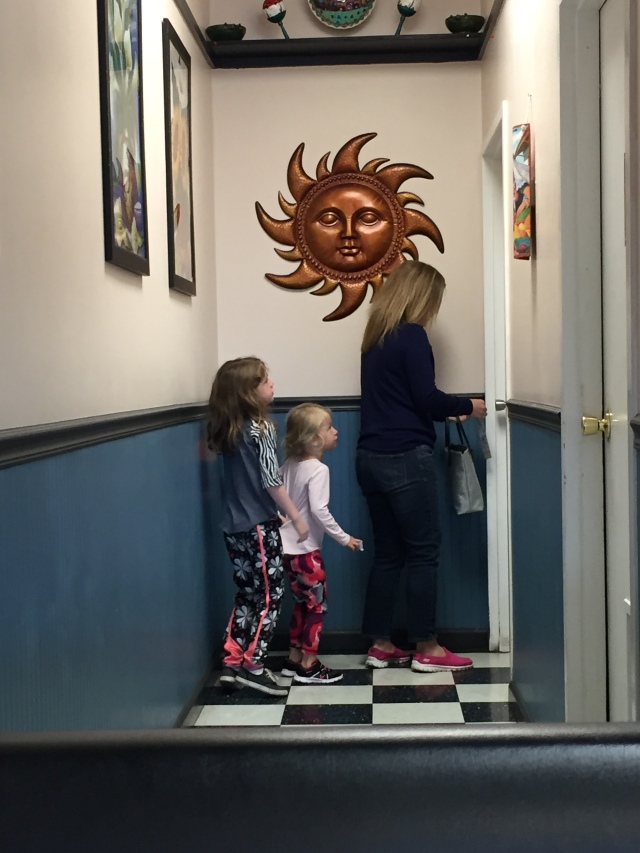 We still had more time to kill before our flight so we decided to just walk around downtown Baltimore a little and show the girls the harbor.  We should’ve just spent the entire day down there at the aquarium and skipped Frederick completely, but you live and learn and we’d never been to Frederick before.  They were a little worn out from the wedding weekend! 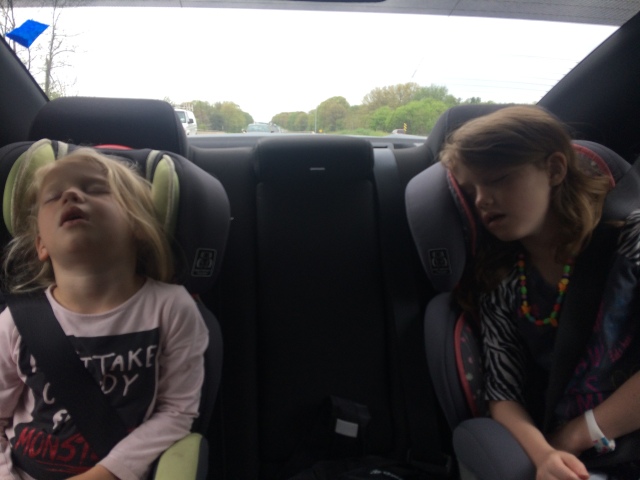 Outside some of the boats – and yes, it was raining.  Again.  Theme of the weekend!

Sadly the dragon boats weren’t open.  We told Lilli all about how when she was younger we got to ride them together!

A view of the harbor and Aquarium.  If I could re-do it, we’d spend the day at the Aquarium and Children’s Museum.  But I’m sure we’ll visit Baltimore again!

Being silly outside the Visitors Center.

We shopped around the stores, then spend some time in the really neat Barnes and Noble on the harbor before heading to the airport.  I found us some dinner and the rest of the crew found a nice spot to watch planes come and go.  Abbi could have easily sat here all day watching them.

And off we headed! We had a nice flight home with less bad weather so she could see more of the cities on land as the sun was starting to set.  It was a hectic trip but I’m glad we could go to the wedding and even squeeze in some sight seeing.  They can be very high maintenance and we can get very frustrated, but these girls are some serious travelers.  Ever since the trip Abbi can spot a Southwest airplane a mile away up in the air, and I recently bought us tickets to fly to Chicago for a few days at fall break when Southwest had a big sale!

Abbi was so sad when the trip was over that when we landed, took the bus to where we’d parked the car, and got in our car she just melted down that she didn’t want the trip to be over and for normal life to resume.  That’s my girl – just maybe tone it down with the tears….