This year my big 40th birthday was on a Sunday – which means we get to celebrate ALL weekend! Bonus birthday!

On Saturday morning I went for my last run of my 30’s on a really nice September morning.  Brent took the girls out for a bit to shop for me and then he made me a steak dinner for lunch.  He had told me we were meeting the Godby’s at Arrington that night for a picnic and he was taking care of everything – and that I had to stay outside all afternoon while he cooked.  I grabbed a book, a blanket and spent the afternoon in the hammock swing reading.  When he told me I could come back inside he had coolers packed, the oven was cooling down, and washed dishes were everywhere.

We left to head to Arrington and I really didn’t suspect anything was up.  I had told him I was a *little* disappointed he wasn’t hiring a babysitter so we could have more adult conversations with less interruptions.  We got there and it was pretty busy and it took us a few minutes to head towards the hill.  As we got closer I noticed the Godbys but several other friends – who don’t know them (other than possibly overlapping at kid birthdays).  I definitely thought it was odd but I just wasn’t catching on that it was a surprise party for me! I didn’t expect it and just couldn’t process what was happening! It finally started sinking in, and right behind us more friends were walking up with catered dinner from Blue Coast – my fave!

We spread out on blankets and feasted on yummy Blue Coast tacos, chips, salsa and of course their infamous fruit tea.  The kids were all having a blast playing together. 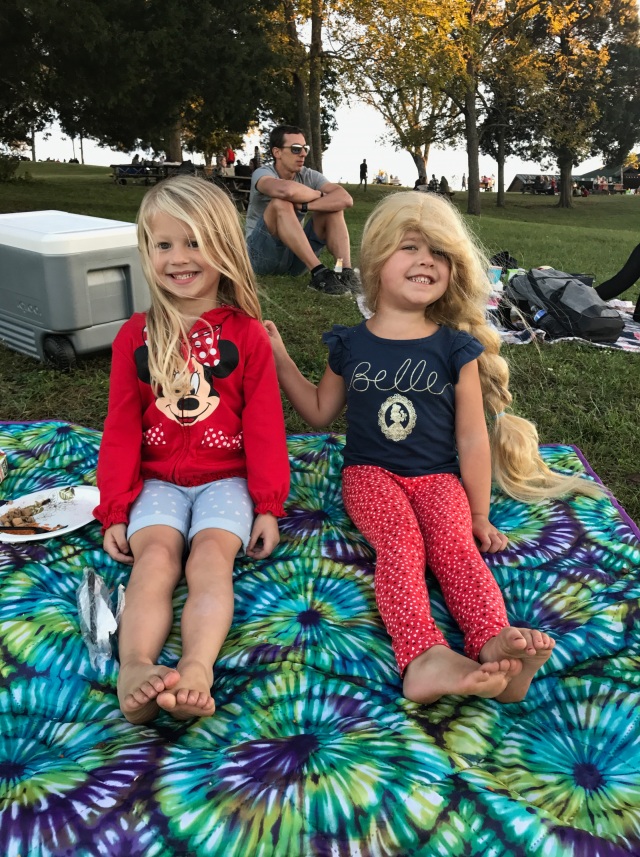 A lot in our group had never been out to Arrington so they were glad to enjoy a new place and it was a perfect afternoon for it.  There were picnics and parties all around.

The kids always have a blast running up and down the hill and playing.

And my cake! Brent got it from my favorite bakery and my only regret was he didn’t get a slightly bigger one! Their cakes are so good.  We only had about 2 pieces left and I pretty much need a cake this size just for myself.  My downfall is that they have a food truck that comes downtown about once a week and I can’t resist walking down and getting a slice to go. 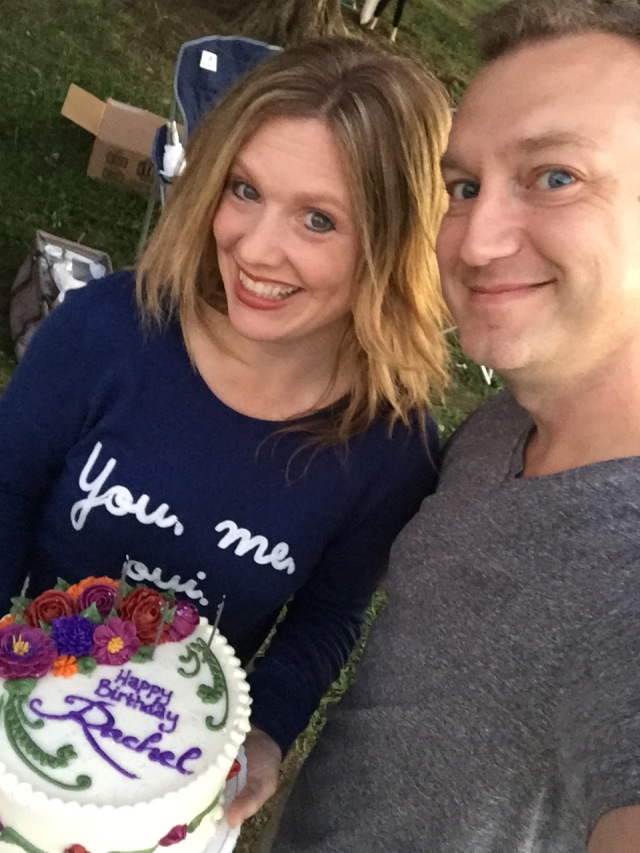 The sun sets way too fast this time of year but we all had such a great time.  I was so shocked Brent planned the whole thing and I really didn’t have a clue! Our friends were so sweet to pick up the food, and everyone was so nice to come out and celebrate me.  It was definitely a long drive for several in our group! It was such a nice night that went way too fast.

And then the sun went down and they were slow putting the lights on so everyone started leaving. At the same time Abbi was throwing a fit so she was chilly and we walked all the way back to the car to find her pants, dropped them in the woods, then had to find them in the dark.  The babysitter idea has merit….. 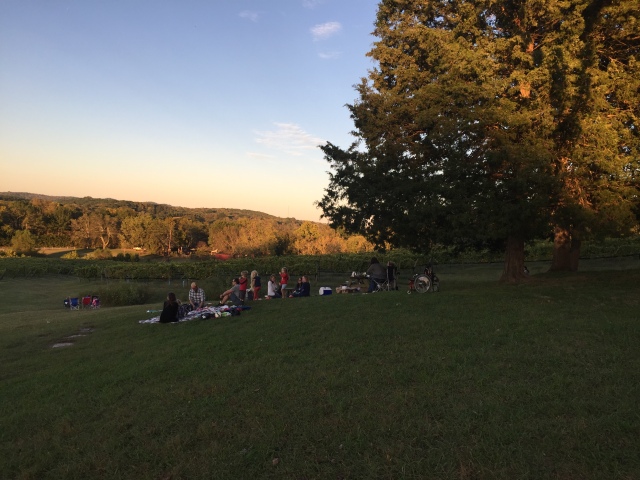 We still hung around a little while because the night was so nice and we really enjoyed their fall decorations. 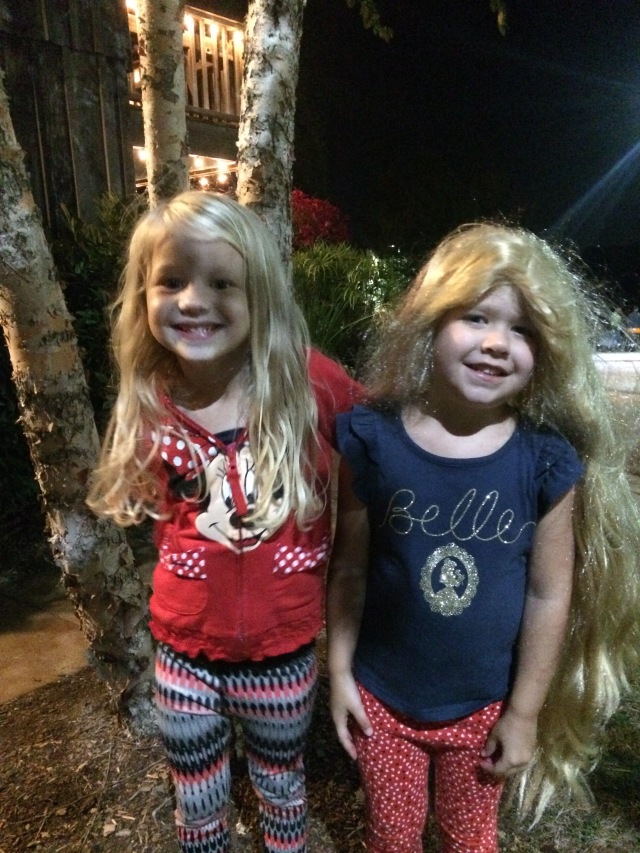 The crazy 4.  Brent didn’t tell Lilli about it until that day.  And Abbi can’t hold water so she didn’t have a clue.

Just the moms! I wish I had more pics of everyone from the party.  It just went so fast and I’m awful about taking pictures at our own parties.

The next day – my actual birthday! I wanted a sweet picture after church.  Apparently I ask for hard things. 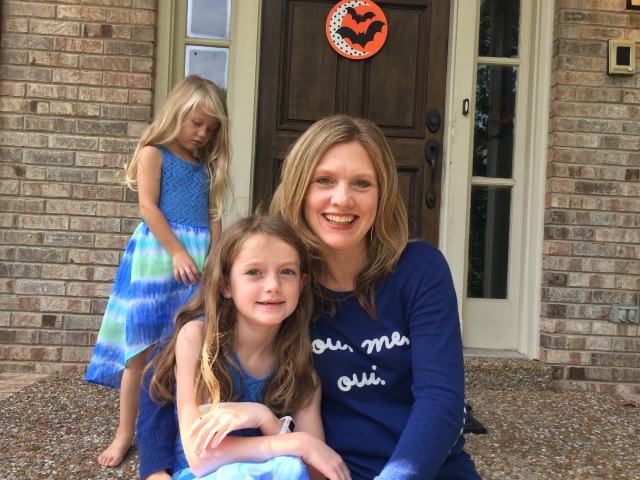 After we ate leftovers from the party I unwrapped my gifts.  They’d each picked out something for me at TJMaxx.  Abbi was so proud of her choice.

It was proudly displayed on the bookcase during Halloween.  I’m not sure if it’s the skeleton or the glitter but this really screamed “Mommy” at Abbi. 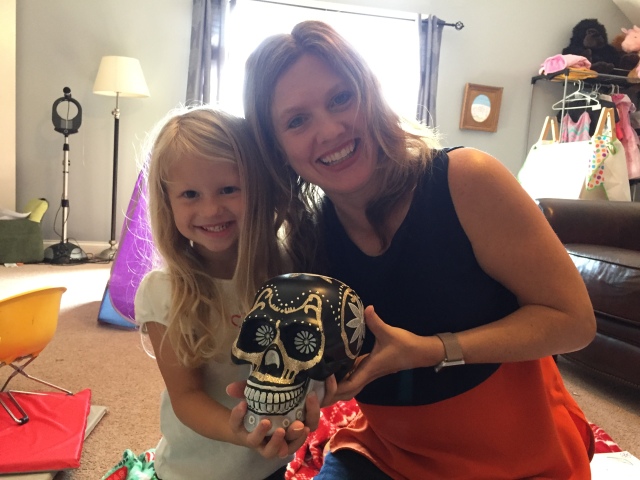 Brent got me a book light and a new bow and arrow! He knew how much I’d enjoyed archery so he got me a bow to enjoy at home.  It’s a fun hobby to have since I don’t have to drive anywhere to practice.  Everyone got in a few shots.

For that day we just made our own targets, I’ve since bought some to use.

My birthday was also the same day as the annual Fall Fest at Lilli’s school.  This is the end of their fundraiser period and celebrates all the money they’ve asked for from us parents.  It’s always been a Friday night until this year when they had it on Sunday afternoon.  On my 40th birthday.  I opted out, relaxed at home, and Brent took the girls.

Abbi was just one of the gang. 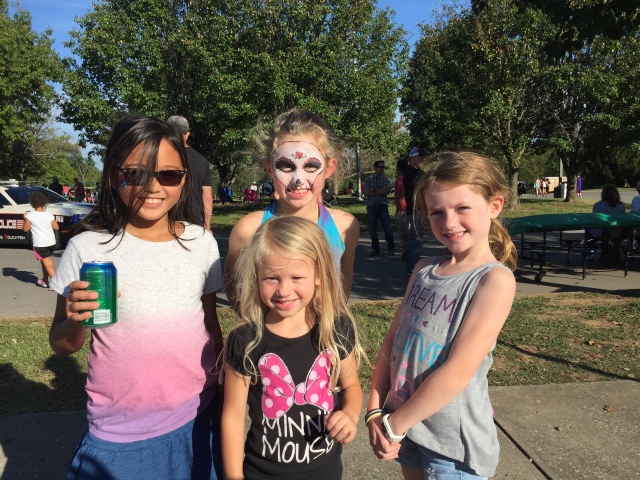 I think she’ll fit in just fine next year.

We don’t keep soda at home, so basically they lose their mind on fructose when they get a chance.  They act like they’ve never seen it before at festivals and at other people’s houses. 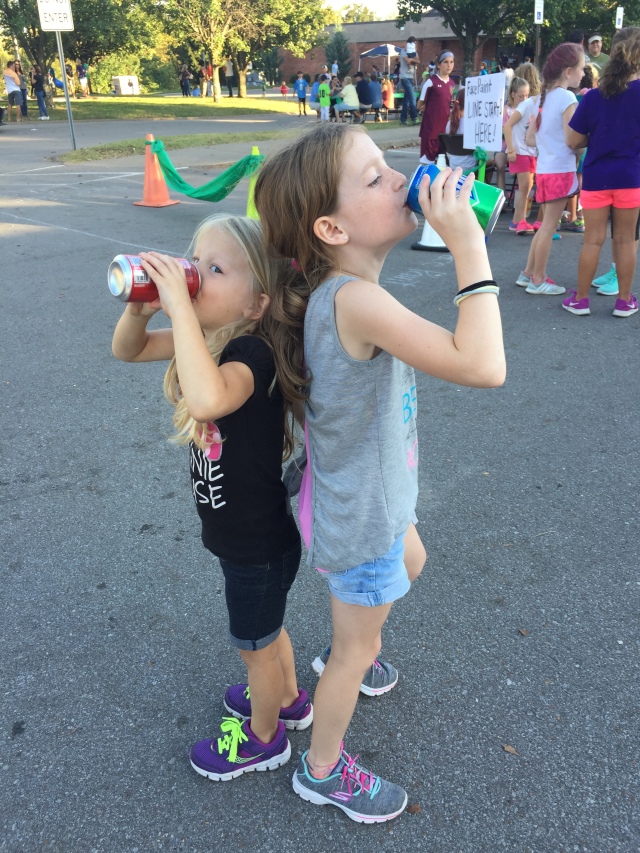 The PTO had a booth set up of all the school merch and Lilli has been begging for a car magnet.  Brent knows I don’t really like that stuff and he thought it would be hilarious to buy one, stick it on my car, and see how long until I noticed.  Of course Abbi marched right in and told me that night.  I’m thinking I would have still noticed within a day! 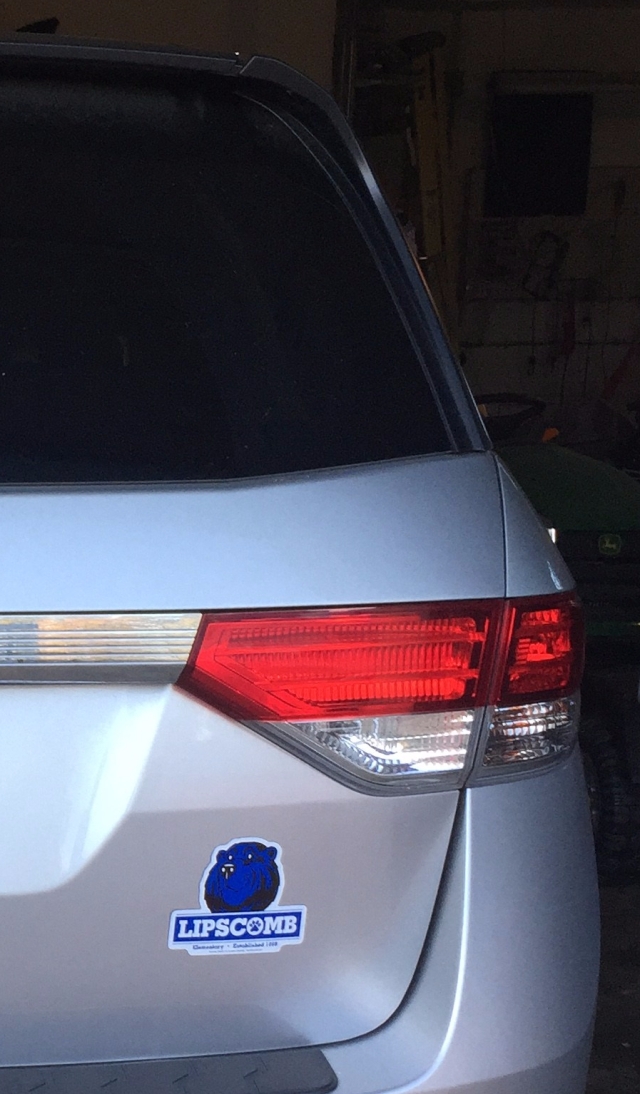 We went to Noodles for dinner.

And one with the girls! The necklace I’m wearing was picked out by Lilli for my birthday. She probably has better taste than her baby sis!

I had a fantastic birthday and was so thankful for all the well wishes I got AND the surprise party Brent threw for me! If I have to turn 40 at least I did it with a great cake, my favorite foods, and my favorite people! 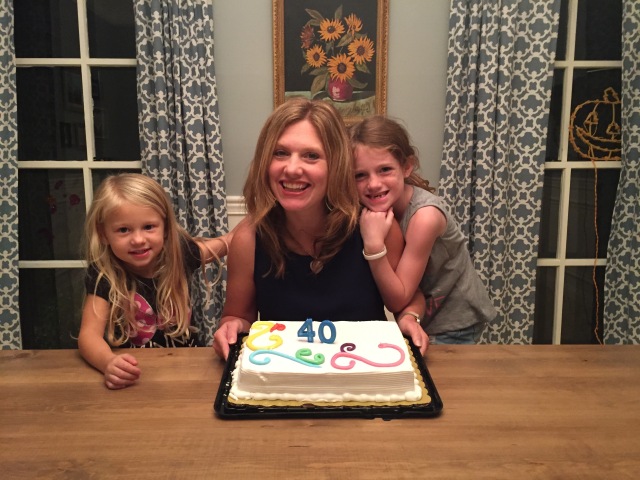