He loves to sleep on his back.  He’s the strangest dog with all his wild sleeping positions.  And he LOVES his bed! 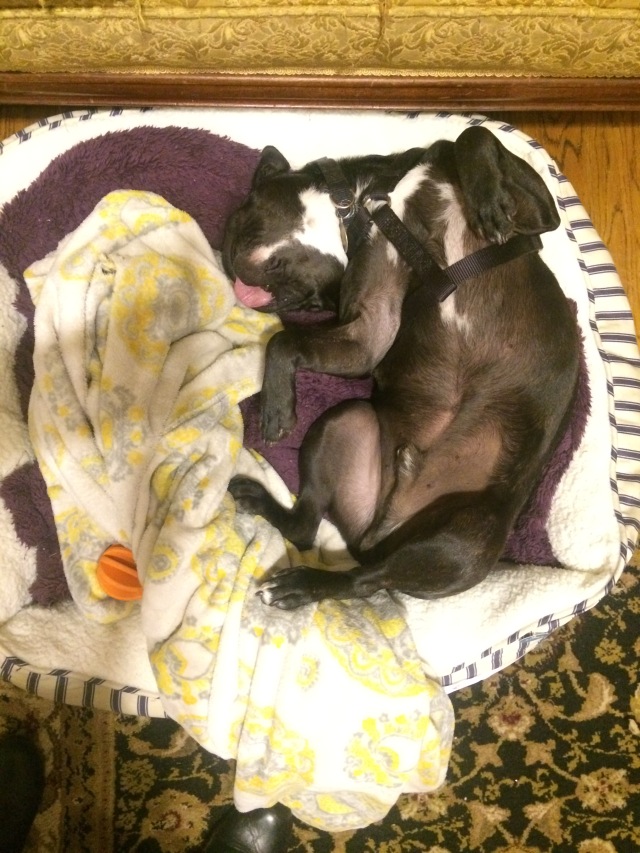 The day after Halloween Lilli started her Christmas list.  Of course! She’d been asking for a dog for a while, even though we remind her often that we already have one.  She she wrote her list, brought it to me, and told me she’d already crossed off all the things we told her she couldn’t have.

We had our Parent-Teacher conference with Lilli’s fantastic teacher.  Lilli was/is doing great and all her scores are off the charts, so that makes these conferences very easy.  We cracked up at her picture on the door in their Jungle theme.  Her classroom is decorated like a jungle with a little hut and everything.

And we also got a kick out of the story she wrote about a memory she’ll never forget.  That happened when she wasn’t even 1 yet.

That weekend the girls headed off for a weekend of Granny camp so we could have some down time and just relax a little.  Abbi kicked it off with some Smores.

For breakfast Brent made us his homemade Smores.  You literally can’t beat them – gluten free and delicious!

I got us tickets for TPAC to see An American in Paris, a classic musical.  We had a guy take our picture at the backdrop scene – and then realized he completely cut out the Eiffel Tower! But thank goodness he got our feet and purse and the trash can.  Ha!

So we redid it ourselves. If you want something done right…….

Abbi was so busy.  Those babies aren’t going to change themselves!

After the musical we walked around downtown for a little while to enjoy the sights.

The leaves were changing and the view of Bicentennial Mall from the State Capitol was really pretty.

For dinner we tried a new Indian place really close to our house – the food was just ok but the service was bizarre.  They didn’t bring meals out together and our appetizer came last. The guy next to us never got the drink he ordered.  I think we’ll stick to our usual Indian restaurant.

One of my bucket list items was to eat at a bagel place.  Seriously.  We’ve just never done that, and especially since I avoid gluten.  We grabbed a coupon and tried Bruegger’s.  Their bagels were SO good.  They’re made with just a few all natural ingredients, and it was definitely the best bagel I’ve had.  But I really didn’t know how to order so I didn’t totally end up with the breakfast sandwich I wanted, but now I know for next time!

We burned off those calories hiking at Cheekwood and enjoying the fall colors.  We were hoping the scarecrows would still be out, but they’d already taken them down.  Unfortunately we never made it out there this year for their fall festivities!

The girls came home, and one of them was pretty zonked out from taking care of those babies.

We took the kids, all of them, for a walk at the greenway. 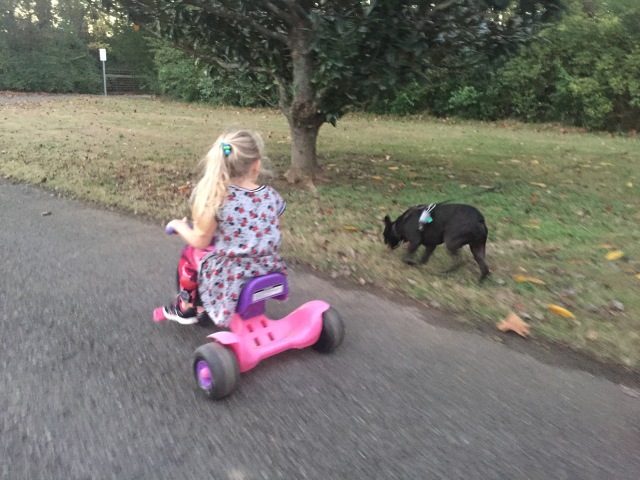 We came upon the largest crawfish I have EVER seen.  It must’ve climbed out of the creek and he was just huge! We almost stepped on him and luckily Olli didn’t notice him because I think he would’ve taken a big snip out of Olli’s nose! We shuffled him off the path so no one else would accidentally crush him – or get snapped! 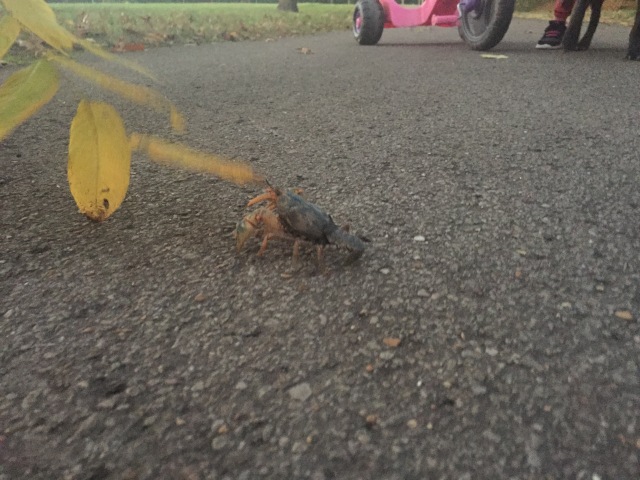