We loaded up the car to hit the road for the Jersey Shore! Our car was nice but just a bit too small! The girls had to ride with the stroller in the backseat under their legs.  Definitely not ideal! 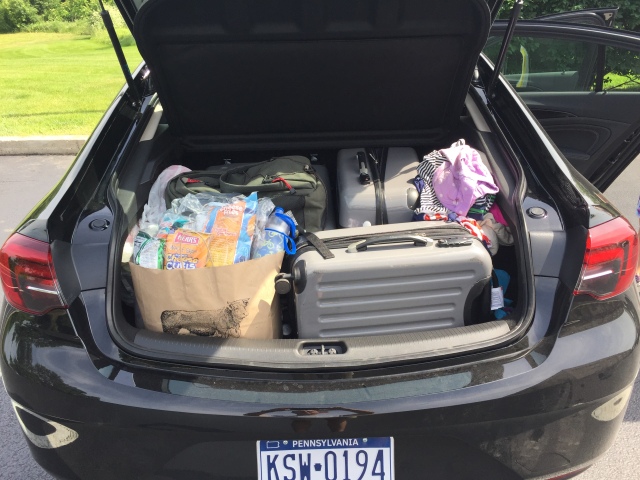 Our path took us South, back through Philly and down to the Jersey shore.  And unfortunately Philly traffic was slow.  But it was fun to see the city one last time. 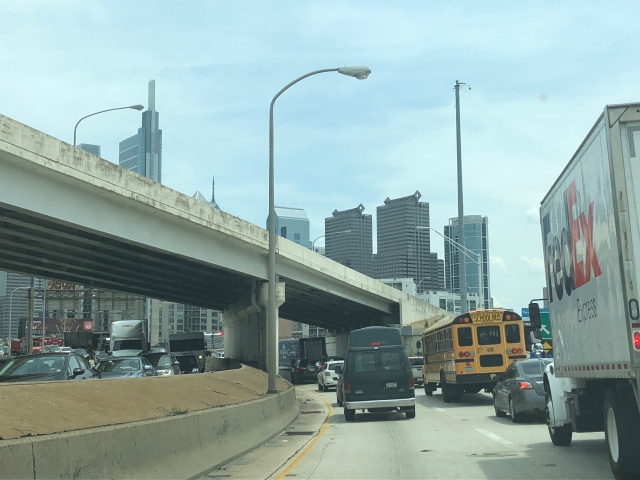 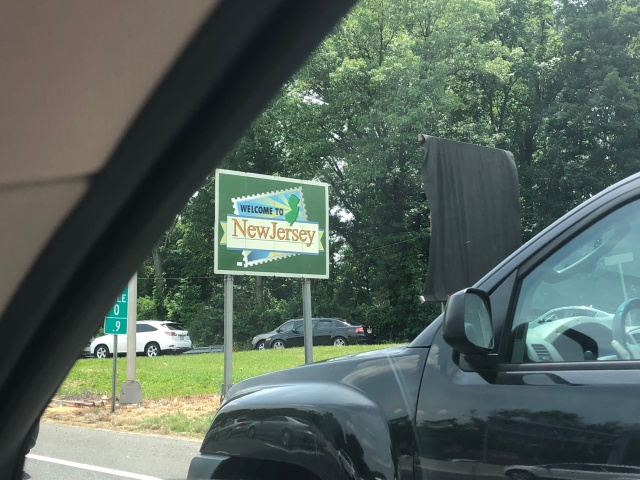 New Jersey is a really interesting state – it has a lot of service areas off the interstate with food and gas that serve as rest stops.  We stopped for a bathroom break and when the girls and I went in the bathroom we saw a “family stall” within the women’s bathroom.  How awesome was this? This would have been so great when the girls were little.  Of course they still loved it. 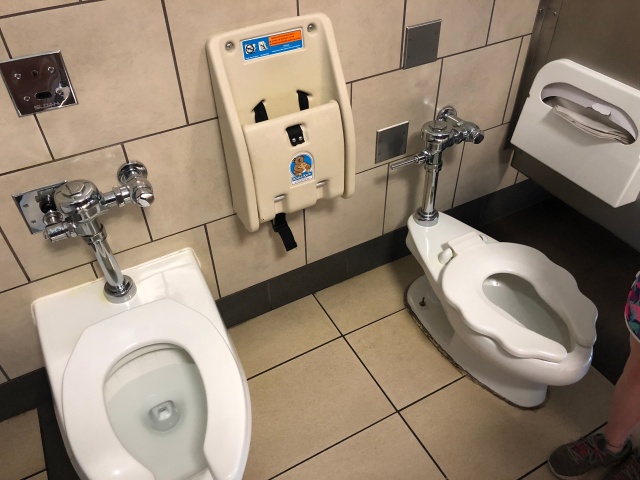 This was really the only day we spent several hours in the car, the rest of the trip had been short rides so they had to spend a lot of time entertaining each other. 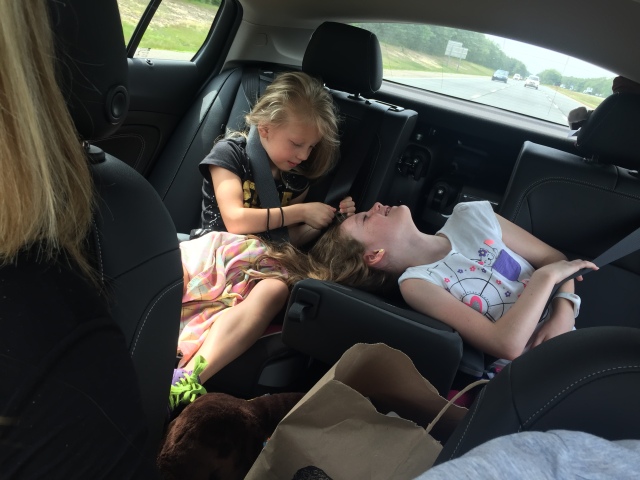 And then finally we were heading into the Jersey beach area.  We’d wanted to book a hotel around there that night but with it being a Friday night there was very little available and what they did have was really expensive.  So our plan was to visit for the afternoon and then head back to our hotel closer to the airport. 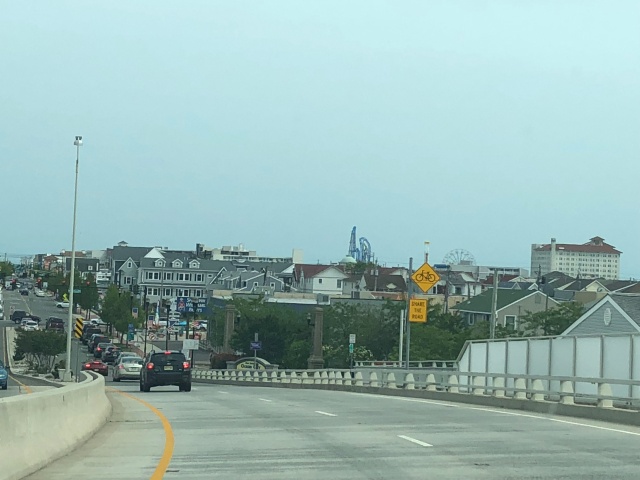 We grabbed a parking spot and then headed to the Boardwalk and the beach.  It was definitely not a hot beach day – it was only 69 which for us is chilly but for a lot of Jersians was beach weather! 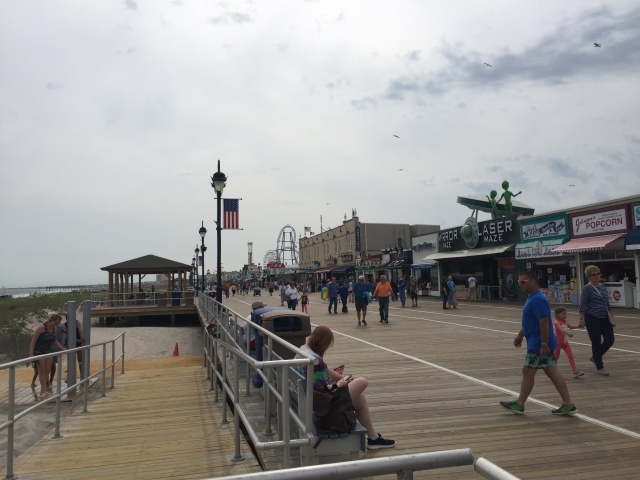 The girls put on their swimsuits under their clothes in case they wanted to get wet.  The Jersey shore is what you think of when you think of older beach towns – boardwalk shops and food, lots of beach space and it’s not littered with houses and condos. 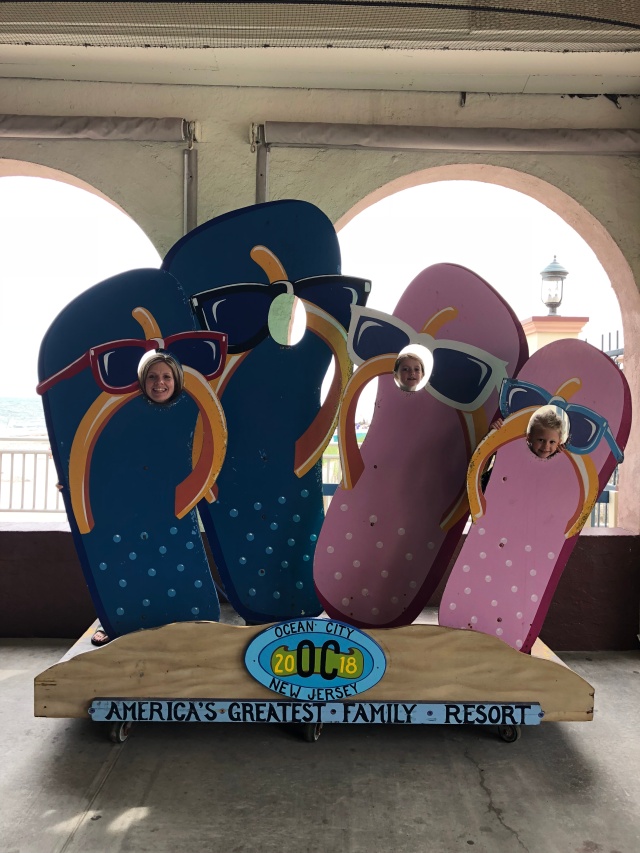 We were cracking up at all the people playing in the ocean and laying out – it was so chilly! We’re definitely wired differently in the South.  Ha! 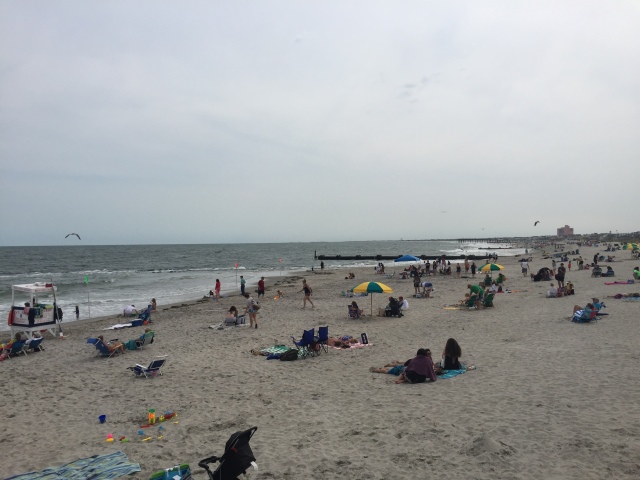 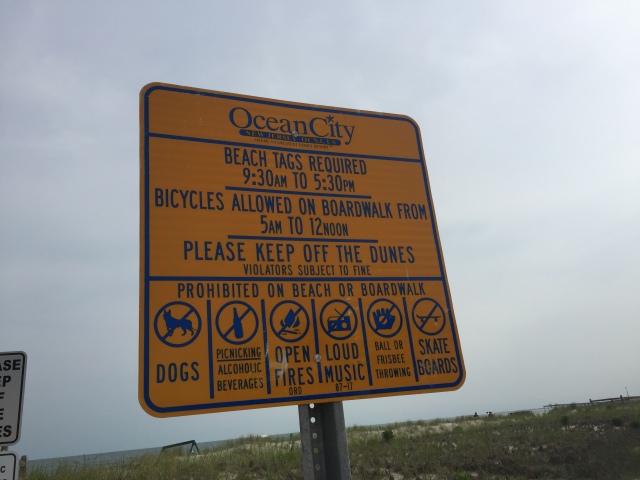 But these two didn’t feel the chill and they were more than happy to run and play on the beach. 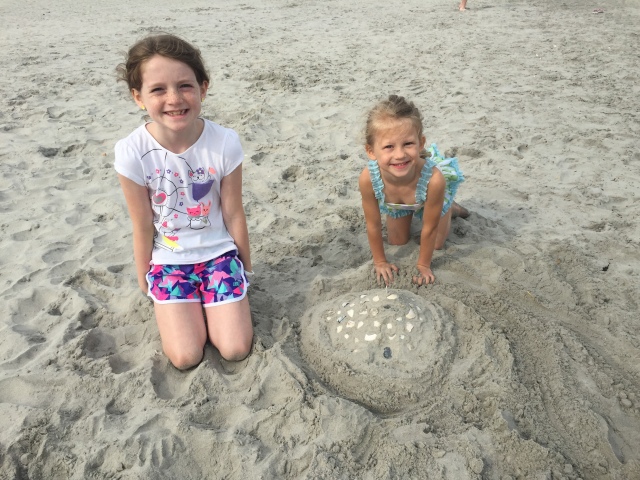 Did I mention it was chilly?? 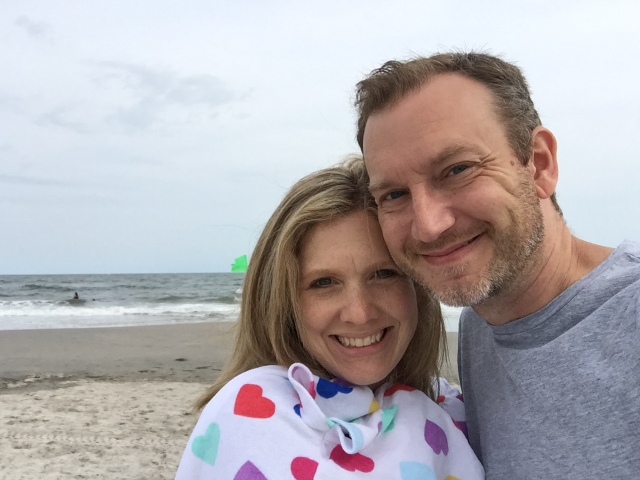 We stuck our toes in the water but that was all we were willing to do! There were tons of people swimming in the ocean.  61 degree water just wasn’t enough for us! 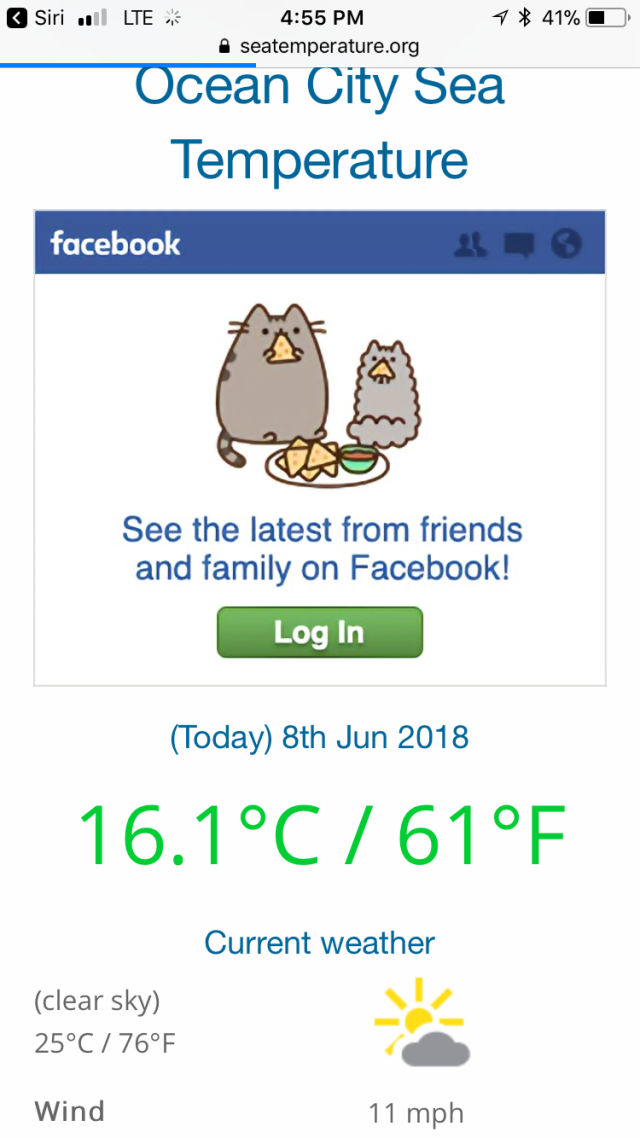 They founds all kinds of shells and brought several of them home with us. 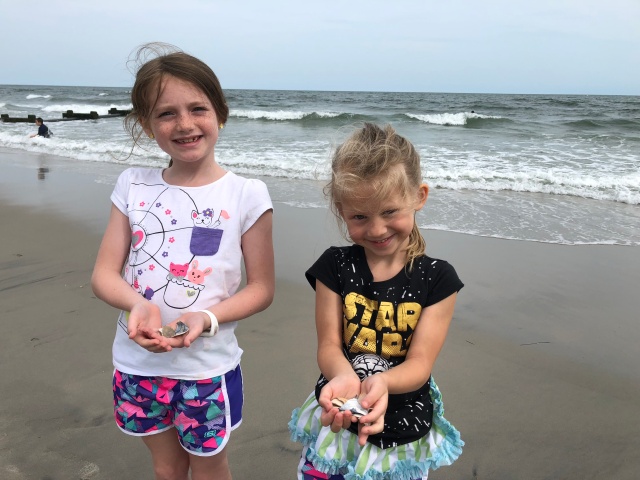 They ran and played until the lifeguards blew the whistle and started clearing people out of the water. 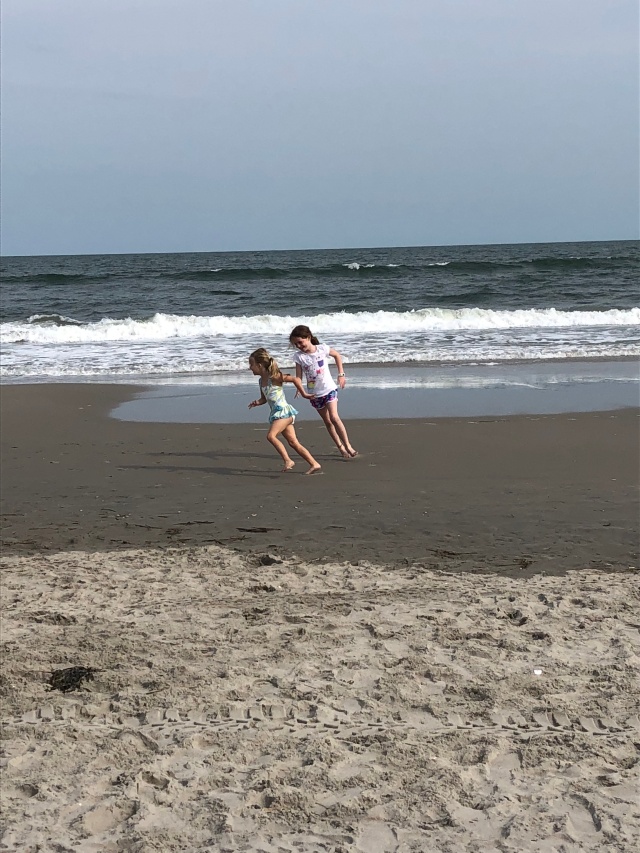 We spent some time on the boardwalk looking at the shops and grabbing a snack before we left.  Compared to Florida the beaches in New Jersey aren’t nearly as pretty or even in the same league, but the boardwalk is super fun. 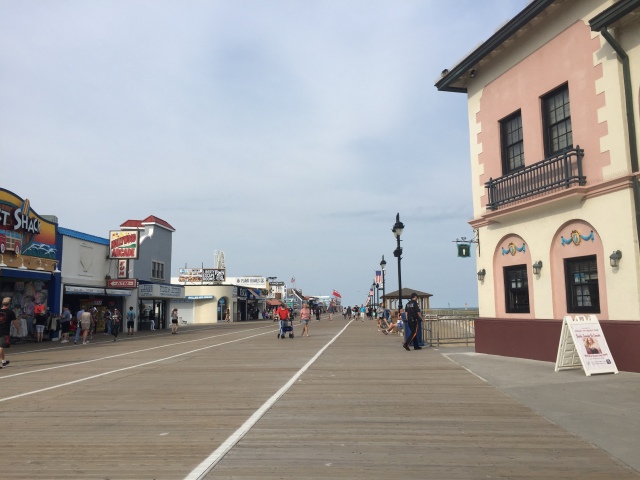 The hotel I picked for our final night had a big indoor pool, so the girls were excited about that. 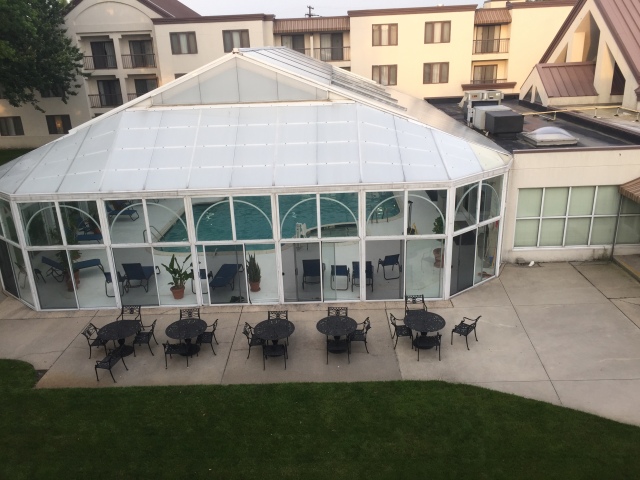 After dinner we headed down to the pool but Lilli was feeling under the weather and never got in.  I think she may have been tired from such a busy week.   We were all getting tired and ready to head home the next day. 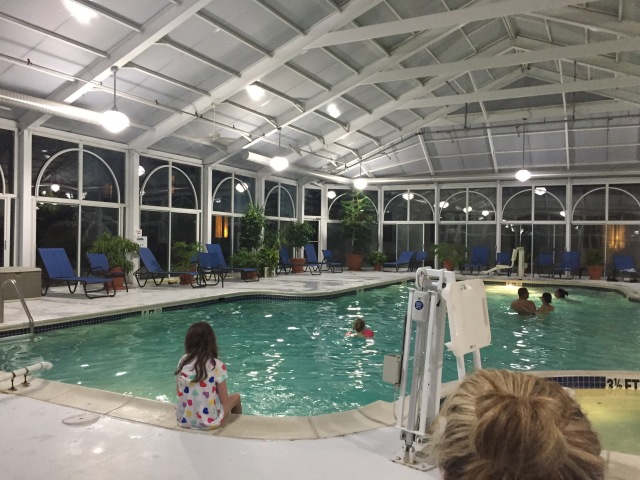