Adventures of Lorax. And Lilli.

After the storms yesterday the temperature dropped from 82 degrees to 39 degrees when I woke up this morning. Is it seriously any wonder that so many of us in the office last week were having allergy issues? It warmed up nicely pretty quickly today and we (Lilli) rode her tricycle all over the neighborhood, we went to the park, and then this afternoon we took her to see The Lorax. She was obviously not a bit excited about it.

She has been talking about this movie for weeks. She had said something about going to the “big movies” a couple of weeks ago and I told her the next time we would go would be to see The Lorax. Ever since then she’s been asking if it’s Lorax time, and any time I ask her if she remembers what we’re doing that day she always asked if it was time to go and see the Lorax. A friend gave her the book and doll for her very first birthday, so we’ve been ready for this movie for over 2 years now!

It opened in theaters yesterday, but with the horrible weather in the South we knew we would be waiting until today. She didn’t have any problems agreeing to take her nap knowing as soon as she got up we’d be going to the “big movies”.

Of course Lorax had to make the trip with us.

In theater pictures are so stinking dark, but her favorite thing is the popcorn! And she’s still too light to hold her own seat down, so Brent has to sit with his leg across her chair so she won’t fold up. I think she’s just over 27 pounds. She and Pippin weight exactly the same. The theater was PACKED! Our concession stand person told us yesterday was dead (due to the storms) and they were twice as busy today.

It was such a cute movie. I really liked it and thought the animation was just gorgeous and the whole movie seemed to go by really fast. The songs in the movie were all so cute and catchy, and I thought all the actors/voices were really great. Of course we did have to take a potty break in the middle, and I missed a pretty big part of the plot that Brent had to explain to me later! (No, she didn’t drink our soda, she just wanted to carry it out afterwards.) 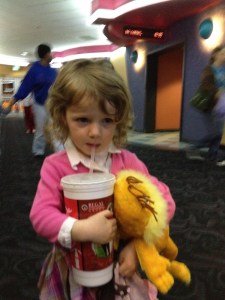 Of course Lilli loved it and we already had to read the book again after we got home (which the main Lorax part is very close to the movie). A lot of the kids were lining up to take their picture with the large corrugate. So far we’ve always done that with each of the movies she has been to, but this was the first one that had one inside for us to pose with!

And this is the I am excited about – Hunger Games is finally coming out very soon!!! Not a movie for Lilli but for sure a movie for me. I don’t even remember the last movie I was excited about, probably the last Lord of the Rings!

I will be there close to opening day, and I guess I still have a couple of weeks to find an appropriate stuffed animal to take with me. Or maybe I can make a nice “Team Katniss” shirt for myself.

This entry was posted in Big Movies, Lorax. Bookmark the permalink.