So when I last had a few minutes to blog we ran through Lilli’s 6th birthday spent with strep.  Monday morning, fairly early, we got a call that Abbi was running a 102 fever.  Ugh.  And anytime she passes out like this in the floor while you’re getting her some Tylenol you KNOW it’s bad.

Brent went and picked her up and she was so cuddly.  She doesn’t stop for a second so it was pretty obvious how badly she felt.  It’s too bad they’re only this still when they’re incredibly sick.

Since Lilli had strep throat we went ahead and got an appointment for Abbi. Her test came back negative, which we were pretty suspicious of.  She ran a fever for a day and then was all better, so we’re not sure what she had.

Loves her puppy! If only we can get him out of this crazy puppy stage and into a more calm, less chewy and nippy dog!

Favorite hiding spot.  And Olli already knows who to trail for handouts.

Much like kids, it’s easy to take really sweet pictures of him when he’s behaving.  Most of his issues arise from just getting too wild and not knowing when to calm down! We start puppy class next week so maybe we can get some training tips for him.

And Lilli celebrated 100 days of school! She loves school and kindergarten and it’s insane how much she’s learned in just 100 days. 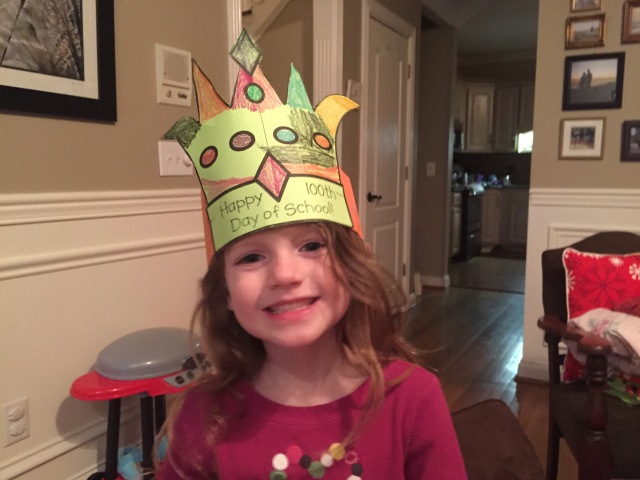