The girls were tucked in around 11pm and Brent and I stayed up a little later eating leftover cake, talking about how we never wanted to host a real slumber party, and then blew up some balloons and cut some streamers to decorate Lilli’s room for the “birthday fairy.” We had the extra challenge of not waking up Lilli and her friend Amelia, but the girls were worn out and never made a sound.  And the bonus was the snow falling outside that we knew they’d be excited to wake up to.  Apparently 10 little girls in Frozen PJs at her “un”slumber party had conjured up a little winter wonderland!!

What we didn’t expect was Lilli in our room crying at 5 am saying she was so hot and was having a hard time “coughing”.  We took her fever and couldn’t believe it was 103.  This totally came out of nowhere (except the girl who sat next to her at school was sick a day or two earlier…..).  Definitely not a fun way to wake up on your birthday and when you have a friend sleeping over.  We knew she should steer clear of Amelia and she wanted Mommy, so…….Brent and Amelia had a sleepover for the rest of the night.  Hilarious.  We didn’t want her waking up scared and alone, even though she has spent the night before, so it seemed like the best, although strange, option. 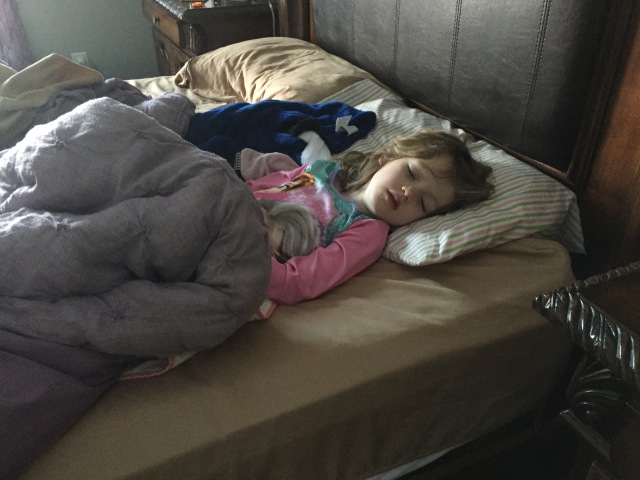 Poor Lilli was just passed out until well after 9 and Brent and Amelia watched cartoons and ate breakfast.  We woke Abbi up so she’d have someone to play with.  Abbi was excited about the birthday fairy’s visit.  Lilli didn’t even notice the snow or the balloons and streamers, and Brent took her to the doctor.  She still had a huge fever and was just lethargic. 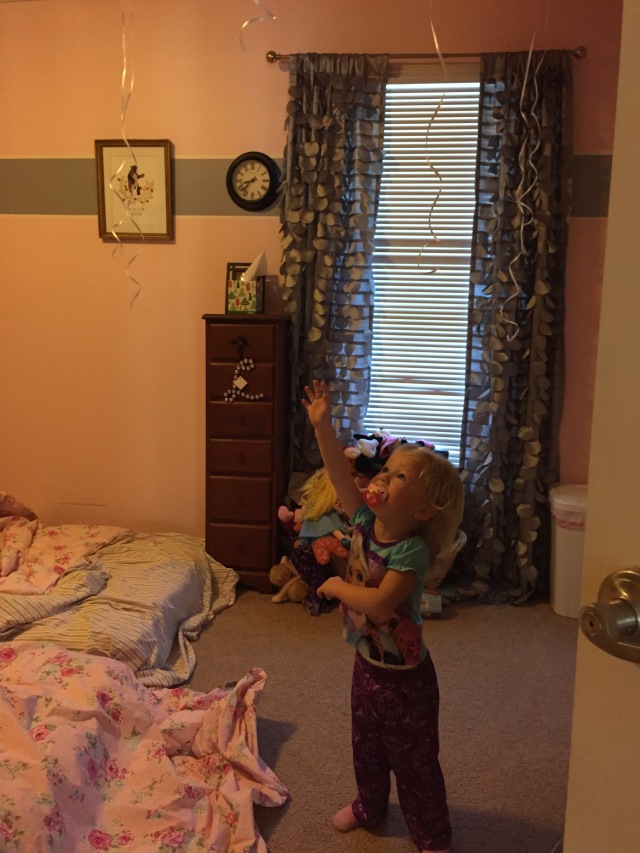 Oliver got his first taste of snow.  This was also the first, last and only time he has considered rolling in it. 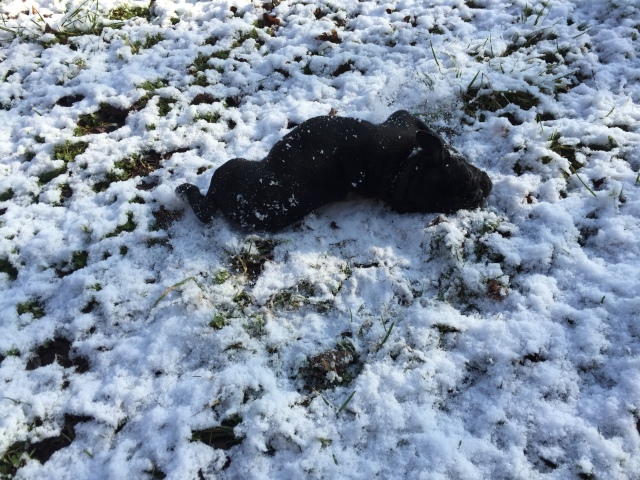 I took Amelia and Abbi out to play in it.  Abbi really doesn’t care that much for snow, so I felt bad for Amelia not really having anyone to play with on our only snow so far this year.  It was melting fast and they only kept their jackets on for a few minutes.  It was really soft and not really much you could do with it, but they had fun playing for a little while. 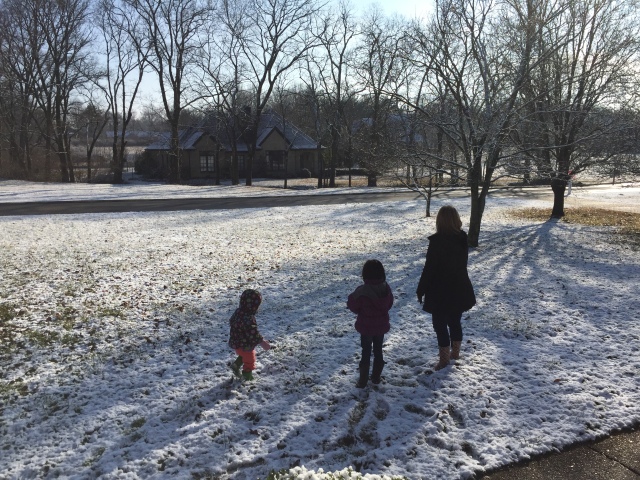 We colored and killed time until her parents came to get her.  I’m pretty sure it was the strangest sleepover she’s ever been to. 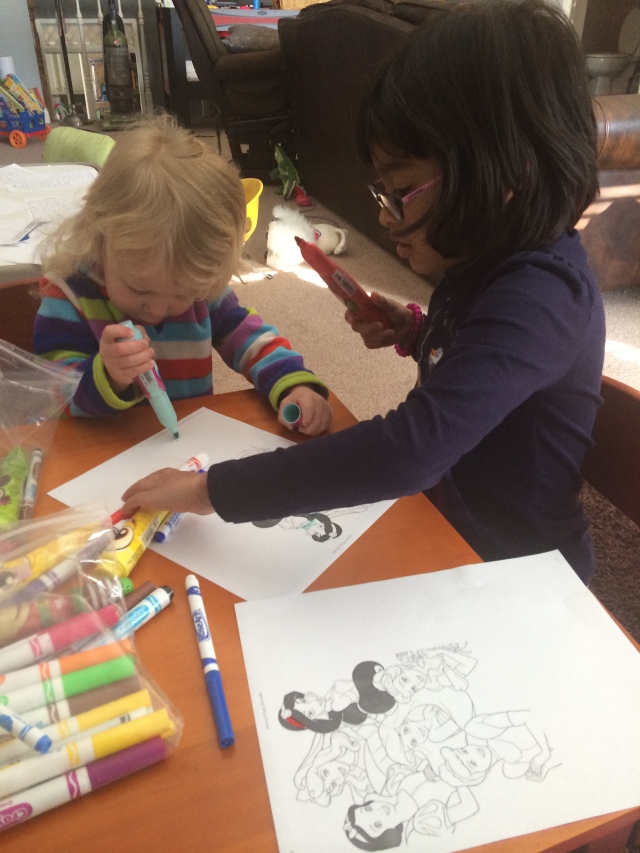 Brent took Lilli to our pediatrician.  She even started throwing up while they were there, so it ended up being a visit for several hours while they waited for her system to calm down and did a few tests.  Her strep test came back inconclusive so they grew it overnight (spoiler alert: it was strep).  She was so pitiful – and also upset at the doctor’s office that she would be missing the Daddy-Daughter Dance that night at her school.  For kindergarten girls that’s the equivalent of prom since it’s their first chance to go.  She was heartbroken.  For sure not a good birthday.

Most of her afternoon was spent like this – a daddy cot with Olli chiming in, too.

She opened her presents and played with them too – we just got her a few Barbie things, books, a Mermaid toy and another Bird so hers can sing to each other. 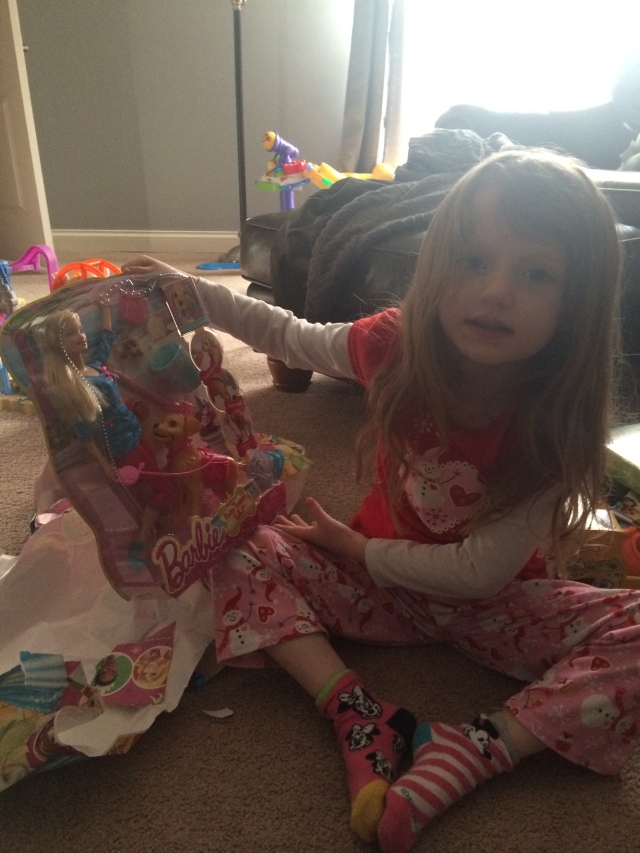 Her high fever and overall “yuckies” kept us in all day – so we didn’t get to treat her to her birthday tradition of Mexican food, and instead went and picked up her favorite meal – Sonic Grape Slush with a side of corn dog.  If you forget the corn dog that’s ok, but don’t forget her slush.

It was definitely a bummer of a birthday, but some years are just like that.  We’ve been lucky so far in her 6 years that weather hasn’t stopped any of her parties and all the sickness we seem to ALWAYS have in January hasn’t been too big of an interruption.

It did give Abbi more time at home to love on Oliver.